The bike that Guy built: a 500bhp cafe racer

You'd think Guy Martin would get enough kicks from 130mph laps of the Isle of Man. Apparently not, that's why he's building a 500bhp turbo cafe racer.

"It's the scariest thing I've ever ridden," he tells MCN. "The first time I rode it I was screaming in my lid!"

Truck-fitter, TT racer and shy star of TV's The Boat That Guy Built, Guy Martin, is trying to explain why he's building this bike. It started life as a plain and simple 1991 GSX-R1100, but virtually nothing of the original remains. 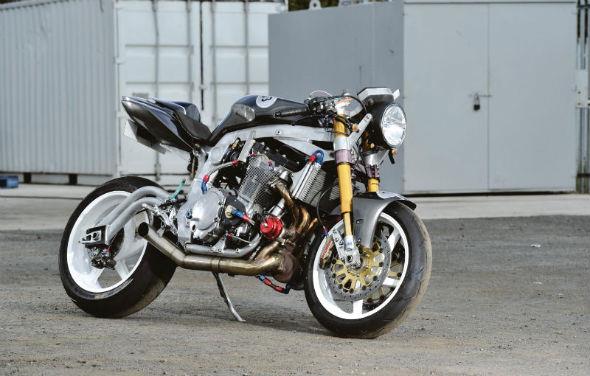 Take the engine, for example. It now sports a 1380cc big bore, fuel injection and a huge turbo currently producing around 320bhp, the work of Sean at Big CC racing. But that's not enough for Martin.

"500bhp is the round number we're aiming for but it's going to take a lot of work to get there," he says.

Read the full story on Guy's part-WSB, part-retro cafe racer in this week's issue of MCN (5 October), on sale now. Don't miss out, subscribe to MCN from just £1 per issue.

Whilst we were getting all the details of the Martek-framed turbo GSX-R, MCN climbed into the cab of a truck to talk about the TT, road racing and future plans. Watch the video below...