In this week's MCN, out August 29, we celebrate the sporting success of British riders as Cal Crutchlow claims the first British MotoGP podium for 12 years.

Not only that but WSB star Jonathan Rea has grabbed the chance to ride the factory Honda of the injured Casey Stoner, and Tom Sykes is challenging for the WSB title after two great results in Russia

We also have the exclusive inside story on the new Triumph Trophy - Britian's most advanced and eagerly-awaited bike - by the men who made it.

Also this week; The inside story on Norton from the British firm's boss, Rossi's new M1 spotted, Neil Hodgson tries advanced training from the police, and Jim Redman, the Godfather of MotoGP at 80 years old... 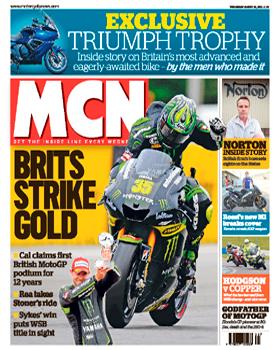