In this week's issue of MCN, on sale Wednesday March 21, John McGuinness gets his first taste of the electric Mugen Shinden he will race at the Isle of Man TT during a test at Motegi, Japan.

Both Honda Racing and Padgetts Honda were testing at Snetterton last week, ahead of the opening BSB round at Brands Hatch on April 6, we have all the news and times from the test.

Also in this week's MCN, the new Suzuki GSX-R1000 takes on its predecessor, £10,000 BMW scooters tested and Honda's secrets for endurance success. 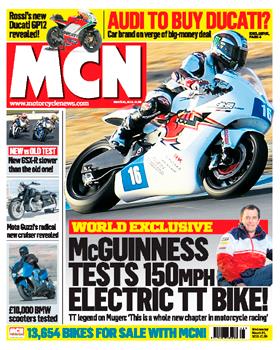 What you'll find in the March 21 issue of Motorcycle News: