If a passing stranger informed you that this time next week you could be sliding a motorcycle round corners like Nicky Hayden in the off season, you’d write him off as a dangerous lunatic.

Well, I am that lunatic. Because I am telling you, here and now, that anyone can learn the basics of this ultra-cool skill within about ten minutes. I have just watched 12 ordinary riders do exactly that (one of them was me). It was safe, affordable and ridiculously good fun. Best of all, it happened indoors.

OK, there’s a catch. For a novice, sliding a 230cc CCM turns out to be the most violent physical exercise you can imagine. So unless you are already some kind of hotshot dirt racer the Champions Training School (for that is its name) will leave you delirious with exhaustion. Specifically, the muscle that lifts your left leg up won’t work properly for four days afterwards. Did I care? No.

I loved every single second – and so did every one of my fellow students. The school is based at Arena UK in Grantham, just off the A1. It’s the brainchild of multi-discipline racer and track instructor Peter Boast, who got the idea through his friendship with seven-time US Dirt Track champion Chris Carr. 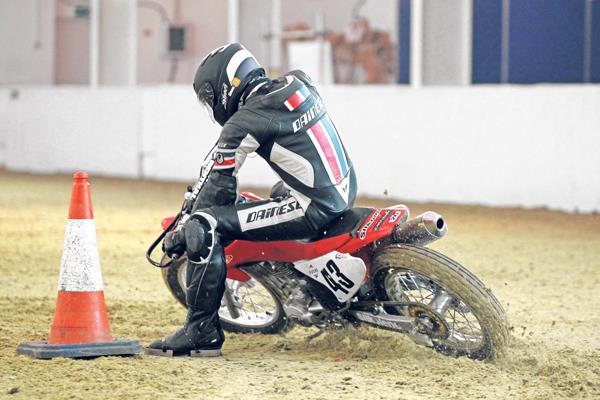 Over in the States, Carr uses huge agricultural sheds to run winter training camps for road and dirt racers. The UK version runs in a 20 by 48 metre equestrian event hall. “It’s always the biggest issue in winter: finding somewhere to bloody ride!” says Pete as he welcomes arrivals for the surprisingly civilised 10am start.

People are wearing motocross gear with armour, leathers, road riding textiles. He and double TT winner Steve Plater are chief instructors. Plater should by rights still be asleep: he only got in from instructing on a track day in Spain at 2am. “I like doing as much as I possibly can,” he grins.

To one side is a bar area with tea, coffee, soft drinks and munchies. It’s very relaxed, and you get the impression that Pete, who founded the Short Track UK series, and Steve, who occasionally races in it, are only here to share their love of riding.

“The main thing we want is a fun day – and, we hope, a few new skills,” says Pete, mug of tea in hand. “It’s a relaxed day, no hard structure to it. We’ll keep coming back here and having a brew. One thing: you’ve got to listen to what we say.” 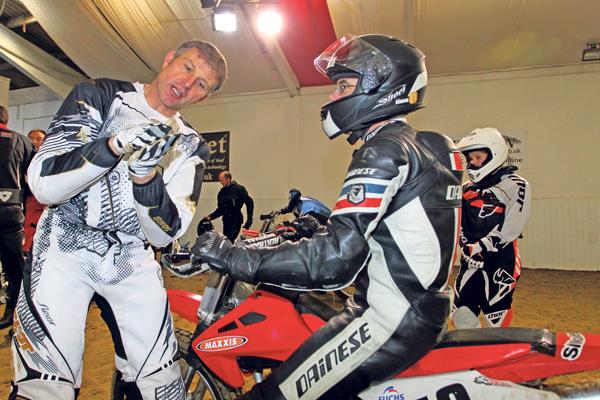 Safety briefing over, we clump out into the arena where Pete explains the rough format: a series of riding drills which start easy and end with a full, kidney-shaped TT course. We each spend an entertaining five minutes cable tying our steel shoes on. These vital objects allow your foot to skitter harmlessly over the surface without catching and twisting your leg off. They also make you hobble around like an orc.

Lesson one is body position. “It’s got to be correct. There’s no point sliding a bike without it,” Pete says. “Sit over the bike, half a cheek off the seat, elbow up to control the slide.” He grabs a CCM and, with nonchalant ease, slithers it round a two-cone oval in first gear. The inside bar is less than 18 inches off the floor.

His foot is like a forward-pointing suspension strut, partly to balance the slide and partly because there’s nowhere else to put it – the footrest is already buried in the dirt. Meanwhile his throttle elbow is up at eye level. The slide itself is so graceful it’s like ballet. We look at each other in mild panic.

Typically, I’m first. “OK, steady away to begin with. If you take a tumble you take a tumble. It shouldn’t hurt.” The bike feels nice, and I’ve already inspected the surface, which consists of hoof-friendly waxed sand and fibre. I decide it can’t hurt me at 10mph, so I go for a big lean – and discover there is absolutely masses of grip. 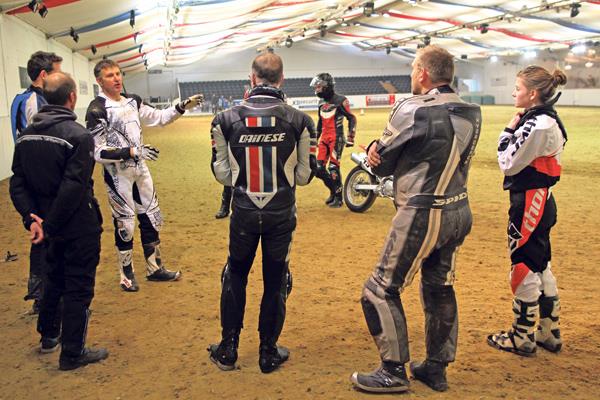 The front sticks hard, and when I crack open the throttle mid-corner the back breaks away obligingly. I can’t believe it. After ten or so laps I’m called back in, shaking with excitement and exertion. “That was awesome! Your footrest was down,” shouts my mate Jon. And then the next rider goes out – and does exactly the same. A few of us take longer to figure it out than others, but only by getting the timing wrong.

The smoothest rider, even at this early stage, is 14 year-old Leah, in her second season of beach racing. We blokes are sawing away at the throttle, on/off, on/off. She’s gradually creeping up to the breakaway point in a much more controlled fashion. When she comes back in I discover why. “The bike’s so heavy!” she says.

Of course – a 230cc four-stroke feels like a moped to an adult, but when you’re small it must weigh a ton. After an hour everyone’s had a few of goes. We stop for a cuppa, and to let the exhaust fumes waft away. Steve Plater munches a biscuit and enthuses about sliding.

“I started speedway when I was 15. I couldn’t afford to do it professionally, but in my head it was what I was really good at. My interest in Short Track is massive. It teaches you bike control, throttle control, body position. And you get a good idea of how the machine works when it’s sideways.”

Is it true that on a track day you and Neil Hodgson can tell if a rider will crash within half a lap? “We don’t even need that long.” How can you tell? “Lots of things. The way they make the bike respond.” 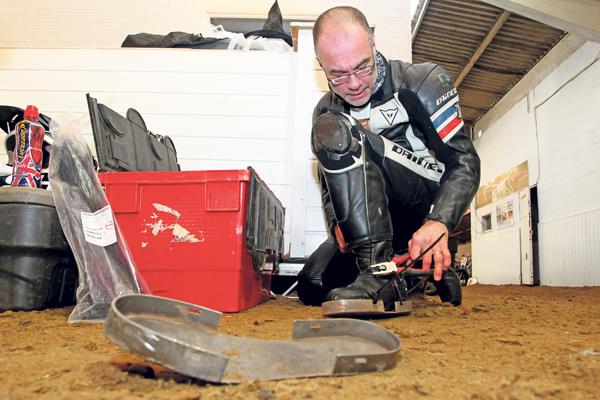 For lesson two we’re up to four cones to make a kidney-shaped circuit which we ride one-handed. The idea is to get us rocking from the hips, and putting our feet up on the pegs. “The Americans do this exercise all the time,” Pete says.

His assistant, 17 year-old Tim Neave, demonstrates. His speed and skill are dazzling. It feels weird, but you get used to it surprisingly easily. Fellow rider Simon Williams, who hasn’t ridden for three years, is easily the best.

Even the instructors are impressed. “I’m really crap at riding (he’s not) but I’m loving the experience,” he grins.

Lesson three is a bigger oval, which introduces two new problems: braking and corner entry. Short track bikes don’t have front brakes. Instead they scrub off speed with lean angle and back brake.

“I really want to see you getting aggressive on it now,” Pete says. “None of this big round circle you’ve been doing. You’re going to have to get the bike stopped and turned. You’ve got to work the brake and understand what that’s about.” Our brains are now grappling with three interconnected three-dimensional problems per corner.

At first it’s all a bit overwhelming: every turn feels like a surprise, even though you know it’s coming. When I stop, I am really gasping for breath. I ask Tim, who’s won the 2010 UK Junior Short Track championship, whether he locks the wheel. “Oh no. Just slow the wheel down, or it can catch you out,” he says.

“I just apply it gently for a second or two then just feed it in gently. Sometimes when I’m on the power I use the back brake to take the edge off it.” I try again, concentrating on brake feel.

After a leisurely lunch of fruit, crisps, biscuits and several litres of water we get our first go at a full-size oval. A tractor has smoothed out the morning’s mess and for now at least the surface is pristine. Tim offers a few encouraging words. “Don’t be too aggressive. You’ll feel when it’s right.

Just use all the skills you’ve been working on: brake, body position, getting on the gas.” Tim, I’ve been riding for 34 years and you’re telling me how to ride a bike. “I know. It doesn’t feel right.” Don’t worry. I’m listening to everything you say. 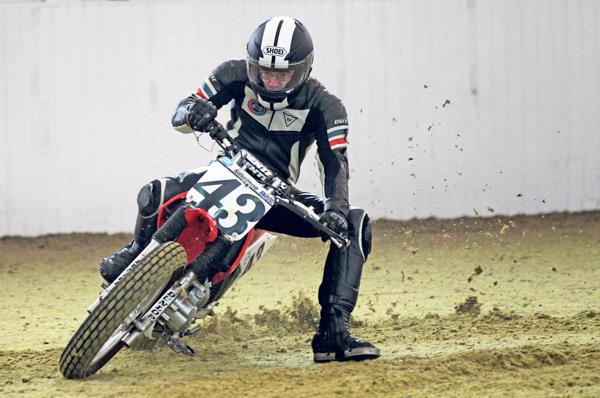 Steve Plater is leading each of us round. I can’t believe I’m hurtling into a bend as fast as I dare with a guy who’s lapped the TT at 130mph. He only glances behind a few times, but he’s figured me out. “You’re concentrating so hard on what’s happening with the bike you’re not looking where you’re going,” he says. “Where you are is history, whether you’re doing it well or not. What’s important is where you’re going.”

He’s right. I’m riding too far out of my comfort zone. So are the rest of us, apparently, because the next session is a track walk and discussion of lines. Unlike a road circuit, a dirt oval line changes according to the state of the track. If it’s chewed up, find another line that’ll upset the bike less.

“Keep your vision well in front of yourself. It’s so important,” says Steve. “You’ve got to read the circuit. It’s your responsibility to understand what’s happening NOW.” We have another go, this time trying different lines behind instructors.

I understand what he’s saying just before my concentration dissolves in a haze of exhaustion. The last session is the TT course: a full oval with a fifth right-hand corner, and a gearchange down to first. It might not sound much, but it sure gets your attention when you try it.

I pull in early, try one more session, and call it a day. I simply cannot ride any more. Nor, it seems, can anyone else. But it’s been a fantastic experience.

Why bother learning to slide? I can only think of five reasons. Because it’s glorious. Because winter sucks. Because you get an adrenalin shot that could knock over a rhinoceros. Because whatever your skill level, it will get catapulted forwards about ten years. And because all that judgement of entry speed, turning points and looking ahead pays off in spades as soon as you get back on a normal bike.

It certainly beats going rusty in front of the telly.