In 1999, Ian Coates left his home in Yorkshire and flew to South Africa to collect a Land Rover for a friend and bring it back to England. The mission was scuppered by visa problems, and he got his wife to ship his Honda Africa Twin to Johannesburg so he could ride back by a different route. Fourteen years later, after riding 250,000 miles through six continents and more than 70 countries, he has returned home to Hebden Bridge.

In the intervening years he has seen his wife seven times, with her flying to meet him wherever he happened to be in the world.

He says he travelled mostly off-road, “crashed every day”, got trapped under his bike twice and ate road kill, with and without maggots. He broke a wrist in Mexico, needed a back operation after falling off in New Zealand, and spent two weeks lost in a sandstorm in Sudan.

The great-grandfather, 69, is off again in again in a few weeks, to Kazakhstan, Mongolia, Russia and Korea, but made time for an MCN interview first.

I say ‘interview’. In fact he required little prompting from me. Coates has so many stories to tell that he doesn’t seem to know where to start, and so proceeds with several at once.

“I could fill your paper for a year,” he boasted. 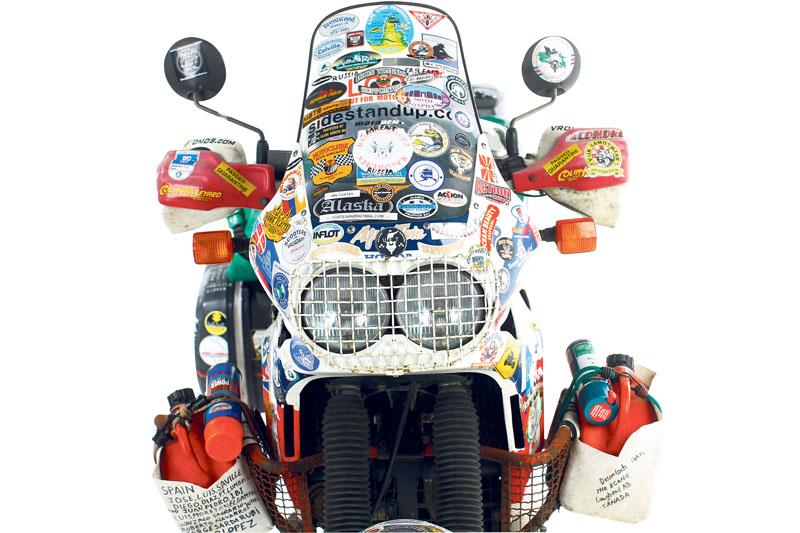 He is hilarious. “This is my axe,” he told me soon after our introduction, pointing to it, mounted on his bike behind a pannier. “For killing people. I mean chopping wood.”

“I’ve had my hair done especially,” he said when asked to pose for a photo. His hair is actually cropped. He has thick glasses and an equally thick, expletive-laden Yorkshire accent.

He also seems ever so slightly scatter-brained. “What you should really have next time is a little thing that you click to record everything,” he said halfway through our chat.

Like that, I said, pointing to the dictaphone on the table in front of him.

The precise number of countries he has visited is unclear. “All of them,” he said when I asked. And continents? “All of them, lad.”

A mechanic and farmer by trade, Coates has been to and across North and South America, Asia and Australia, as well as Africa and Europe.

He uses the word “wilderness” a lot. It is, he says, where he spent much of the 14-years, following trails. As a result, border crossings were streamlined.

“Some places I didn’t bother telling them,” he said. “I just rode through. I’m off-road. I’m not in cities. I’m in the bloody wilderness. Half the time I don’t know when I’ve crossed a border.”

His world tour took so long, he explained, grinning, because of his navigation methods.

“I do it with the sun. That’s why it took me 14 year. I get lost all the time. But that’s how you meet nice people. I’m just driving. I see a road or trail and go up it to see where it goes. I just go wherever. I don’t know where I’m going.” 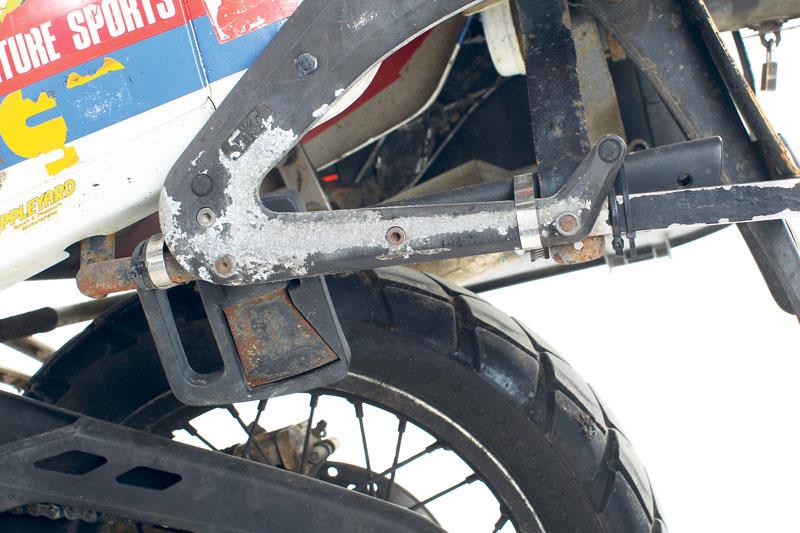 Isn’t there an obvious danger of inadvertently going around in endless circles?

“I have done. I did in Iceland. I went around in a big circle. It don’t matter. I’ve no stress. I’m not bothered where I go. When it gets dark I put my tent up. And I’ve usually got tins of sardines and baked beans and Christ knows what on my bike. I have a wire mesh. I put some stones around, build a fire, plonk the mesh on it and that’s all you need.”

Did he spend a lot of time alone like this, I asked.

“Oh yeah, about 14 year,” he said. “They were looking for me in Venezuela, in the mountains.”

“The f****** world. Some people get on the internet every night, telling everyone what they’ve done. If they fart they email people about it. I don’t bother. I’m in the mountains where there’s no electric for two months. Same in Siberia. In the wilderness for two months. And people inform governments. They think I need rescuing. They need rescuing. They’re in a bloody city. I’m in the wilderness, where there’s nowt to go wrong.”

“There are places in big cities in England that you wouldn’t go. Once you get out in the countryside, you’re right. And that’s where I spend all me time. I’ve had no trouble.”

But he does admit to being in danger in Sudan, after becoming trapped in his tent by a sandstorm. When the storm died down and he emerged, he found the trail he had been following completely buried. He says he was one day from death when he was rescued by a passing truck.

“There was a track but when the sand storm came you can’t see nowt. I thought, this is it. I hope nobody fetches some cement and water and asks me to mix all this lot.

“I was in my tent. You can’t go out. And even in your tent the sand is coming in. It’s everywhere. It lasted a few days and when it finished there were no tracks. For two weeks I was lost in the desert. I could still be there.

“I'd had no food for three days and only a litre of water. I’d lost two stone. I knew I was going to die the next day. Then I saw a wagon. I knew they came through in the night, when it was cooler and the sand was firmer. They put my bike on the back.” 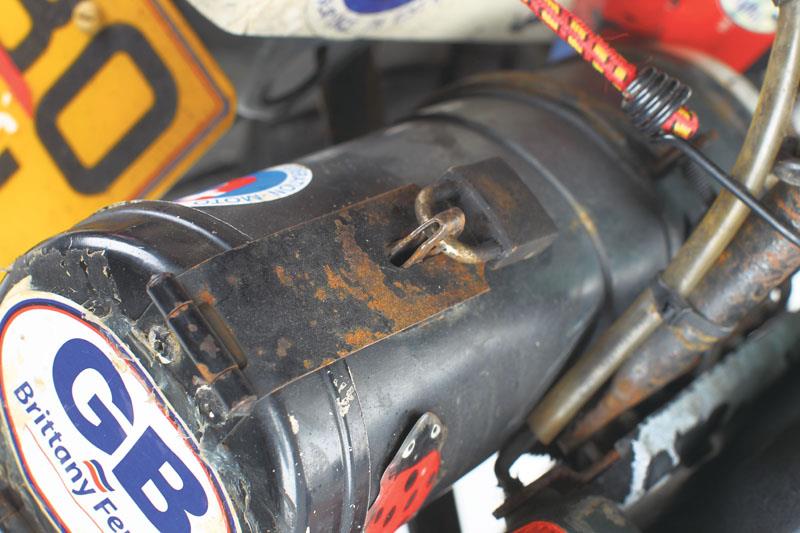 He has twice had to be freed from under his own bike by passers-by, in Ethiopia and Australia's Cape York Peninsula, one of the largest unspoilt wildernesses on Earth.

“I was stuck under the bike for two and a half hours in Ethiopia and three hours in Cape York,” he said. “That sorts the men out from the boys, Cape York. It’s the worst place in Australia. It’s full of bulldust, which is like talcum powder but deep. You just drop into it. It’s like an enduro just to get there.

“I fell off in the bulldust. A lad came along in a Land Rover and found me stuck under the bike.”

He says he “mended” himself after a crash in Mexico. “I fell off and broke my wrist and ribs. I went to hospital but walked out after six hour because they were full of s***. So I went to a hotel and mended myself.

“I knew my wrist were out so I strapped it up right. I went to the shop and got a lot of food and the cleaning lady brought me some painkillers. I just stopped in bed. I didn’t move.

“Then I had to ride to Mississippi to meet my wife. In winter and ice. Have you ever ridden a bike with front end twisted but going in a straight line? I was about three weeks late. She thought it was normal.” 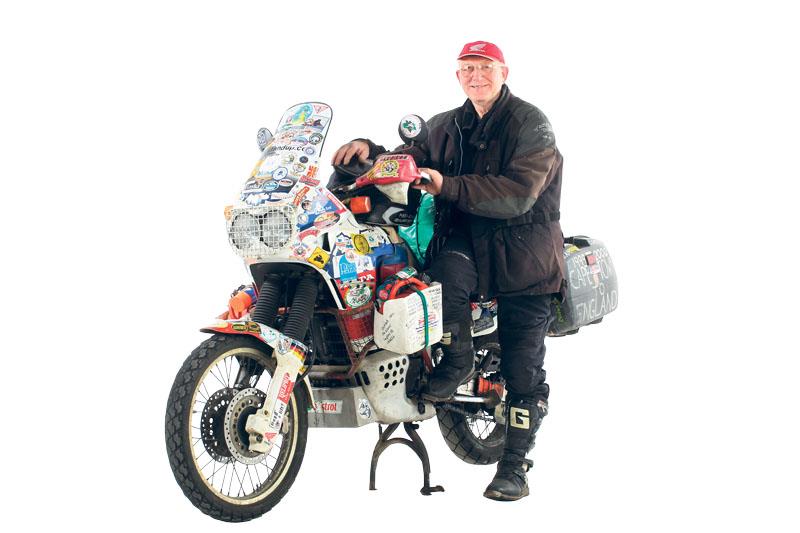 If there is any strain on his marriage, Coates seems oblivious to it.

“My wife thinks I’m a real lad,” he said. “She thinks I’m the best thing since sliced bread. I should be in an old bloke’s home playing bingo. I’m 70 in two months. Three months. I’m a great grandfather. They think I’m right.

“When my wife’s p**** off, she can just come to wherever I am. When I was at home I was head down working all the time, seven days a week. I’m a very good bloke.”

Coates is convinced his travels will become the subject of a film. “I know that someone will make a film about me. Until it went knackered in New Zealand, I had a video camera that I just carried around. I’ve 80 films at three hours each. I’ve never seen them.”

And he has some advice for fellow travel videographers Ewan McGregor and Charley Boorman.

“It's McEwan isn't it? That Ivan McEwan. There were two of them. Bloody film stars. That’s a bloody Hollywood film that is. Lads don't want to see that. It's a bloody holiday.”

See what Ian's talking about and check out Long Way Down over at MCN-TV.com - All About Bikes, All Of The Time.