Since its launch in 1986, Honda’s legendary sports tourer has become an institution. With a formidable reputation for reliability, the VFR has stood the test of time. But it wasn’t always so.

The VFR can trace its roots back to some pretty disastrous mid-1980s V4s. Believing the V4 produced the optimum power and torque, Honda launched a family of bikes that very nearly destroyed the company’s hard-earned reputation for engineering excellence.

The VF range came in three configurations - 500, 750 and 1000 and it was the 750 that soon started to go wrong. A large number of VF750s developed major mechanical issues, something that quickly lead to the model being dubbed ‘the Chocolate Camshaft’.

With the credibility of their prized engine in doubt, Honda needed to do something drastic – they made the 1986 VFR750F. 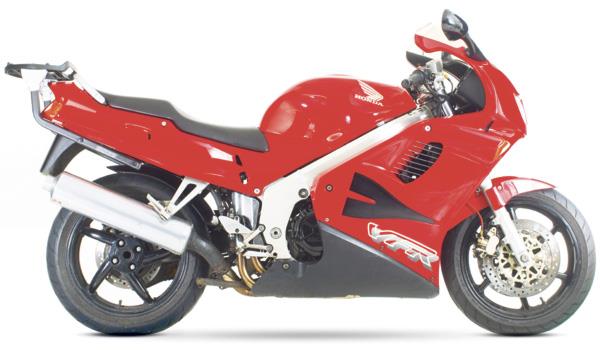 What was it like then?
After the embarrassing debacle involving the VF750, the VFR750F needed to hit the ground running - literally!

The VFR initially wasn't a sports tourer, it was a road bike that like so many Hondas had one eye on practicality and the other on track performance. However this bike had a secret weapon - its V4 engine.

Using technology taken from the RVF endurance racer, the VFR's V4 engine came with gear-driven cams rather than the VF's cam chains, something that improved reliability and also led to the 'R' in its name.

It may not have been track focused, but that wasn't to say the Vee Four Racing couldn't perform on the circuit when required.

Road riders were impressed at the VFR's usability and track success certainly didn't detract from its sales.

The VFR750F was a worldwide hit and Honda's faith in the V4 motor was being rewarded, although at a cost. In the UK, the VFR retailed at £3499 - which was certainly less than it cost to produce.

Over subsequent years Honda refined the VFR, first of all in 1988 when 17-inch wheels added to its sporting side and then again in 1990 when they gave it a sexy single-sided swingarm and a new look.

A re-positioning of the motor within the updated frame may have increased the VFR's agility, but a larger fairing and taller screen ensured practicality was still paramount.

Finally, the VFR750F was updated for the last time in 1994. Now even more focused on comfort it had found its niche as a sports tourer and created its own category of motorcycle with a huge fan base.

What is it like now?
The VFR splits opinions and because owners are so passionate about their particular model they will always claim it is the best of the breed.

In the case of the VFR everyone agrees that either the final generation 750 (R/S/T/V) or the non V-TEC 800 are the real stars of the VFR line-up.

The first generation of VFR (G/H/J/K) can be snapped up for less than £1000 but they are probably better viewed as cheap transport rather than a longterm investment. A 1990 bike costs just over £1000 and is likely to have over 50,000 miles on its clock, which shouldn't put you off if it has been serviced regularly.

Snap up any VFR from 1990 onwards and you will get a solid, robust, sports tourer that comes with outstanding build quality and unquestionable reliability. Any bike that is over 20-years-old will suffer slight niggles from 'consumable' components such as reg.recs, but the important items, such as the motor, will keep on running.

The earlier VFRs aren't as sporty as the later 800 models, but they are still more than competent with the handling best described as predictable rather than agile.

Comfort levels are excellent and for the price you are getting a lot of bike that may not be as rapid as modern machines, but is far better constructed. 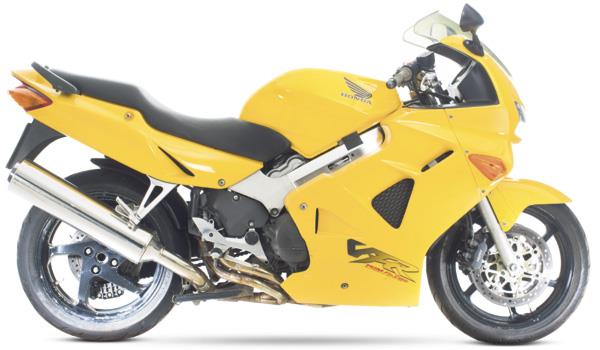 What was it like then?
Having established its place in the motorcycle hierarchy, the VFR’s 1998 update was eagerly awaited by a large number of loyal VFR750F owners keen to upgrade from their current model. They weren’t disappointed but they weren’t completely blown away.

By increasing the engine’s capacity from 748cc to 781cc with a longer stroke, Honda boosted the VFR’s mid-range, an area owners identified as slightly lacking, while the introduction of fuel-injection received mix reviews, as did the new chassis.

Despite a brand new aluminium frame with the swingarm pivots mounted to the back of the engine, the VFR800 lost some of its sporting edge. By side mounting the radiators Honda had attempted to alter the VFR’s weight distribution and owners felt that the changes, as well as the 9kg increase in weight, had dulled its handling.

And then there was the look. Owners loved the VFR750F’s NR750/Ferrari-inspired styling with the fins in the side fairing yet Honda removed them in the 1998 update and made the 800 more angular and a bit oddball.

The aesthetic changes didn’t go down well and the Dual Combined Braking System was also causing frustrations with those who had chopped in their much-loved 750s for the new 800.

Although still a big seller for Honda, the VFR800Fi didn’t have the kind of impact they expected. Sales were strong, but not to the levels that the original VFR had seen as a large, and vocal, number of owners proclaimed the 750 a better machine.

What is it like now?
The problem with creating a bike as popular as the VFR is that when you update it you are always going to face a backlash from diehard fans – which is exactly the issue Honda had with the VFR800Fi in 1998. Fifteen years on these feelings have muted slightly.

Secondhand sales tell you all you need to know about the VFR800Fi – they are incredibly sought-after and seldom stick around on showroom floors. This generation of VFR encapsulates everything that owners love about Honda’s V4, yet manages to bring it up to date without adding unnecessary complications.

It is a bike that can either sit in your garage as a back-up to a main vehicle, be used as a winter commuter, be taken touring or just perform superbly well as a daily machine that will never let you down. It encapsulates everything that makes the VFR a great bike and is arguably the best evolution of the brand.

With a slightly taller screen and heated grips, the VFR800Fi is everything you could ever need in a bike. The V4 engine is a joy to use, packed full of grunt and has a beautiful exhaust note, while modern tyres add a bit of sportiness to the chassis.

Uncluttered by modern complexities (apart from the CBS), the VFR800Fi is a brilliant used bike that can be had for a real bargain price, provided you can find one for sale. 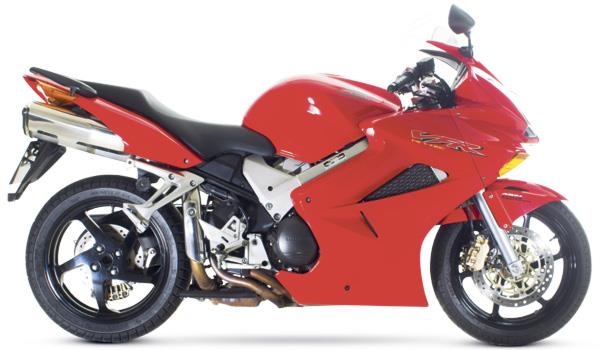 What was it like then?
Controversy seems to follow the VFR and in 2002 Honda’s completely revised VFR800 V-TEC set tongues wagging. The main bone of contention came from the introduction of V-TEC technology (Variable Valve Timing and lift Electronic Control) into the ground-up new V4 engine.

While each cylinder has four valves, a slide pin controlled by oil pressure disables one inlet and one outlet valve per cylinder below 7000rpm, boosting the VFR’s bottom end. On paper, it was a very clever system, but it had its flaws.

Early tests revealed an irritating lurch as the V-TEC activated, something that exasperated owners as it often happened at fast motorway cruising speeds in top gear.
But that wasn’t all. The angular looks didn’t impress the VFR community.

The new-look fairing was possibly a touch too radical for a bike that was generally owned by conservative riders. And the underseat pipes made using throw-over luggage tricky.

The 2002 VFR may have had improved fuel economy, a larger 22-litre tank and considerably sportier handling than before but the universal dislike of the V-TEC system was a major sticking point.

Having been the main player in the sports tourer class, the VFR faced tough competition from the larger capacity Ducati ST range, Triumph Sprint ST, Aprilia Futura and even the older VFR800Fi model.

What is it like now?
The VFR800 V-TEC is a current Honda model with a retail price of £10,599, making a secondhand 2002 bike for £3500 appear excellent value. While it is true that early generation V-TECs suffer from an irritating jerk in power when the system activates, considering the saving it is an annoyance that is worth putting up with.

The updated V-TEC model is noticeably smoother but you are looking at nearer £5000 for a good example. That’s still less than half the price of a new VFR so it’s again good value, especially as the bike is unchanged since this update. Is either worth considering?

Sports tourers have fallen out of favour of late, with adventure and naked bikes luring buyers, making them something of a forgotten class. The VFR is still a lovely bike to ride. It handles well, is lighter than a full-dress tourer such as a Yamaha FJR1300 and has superb build quality and reliability.

While a new VFR doesn’t appear good value compared to the likes of the cheaper Triumph Sprint GT, a secondhand bike represents a decent purchase. When you buy a VFR you are buying a bike that will run hassle-free day in, day out, and is a true Jack of all trades.

The V-TEC system isn’t that bad, and its intrusiveness depends on your riding style. There are a lot of happy VFR owners the world over who will be happy to tell you the virtues of VFR ownership.