Honda CBR125R
For many years Honda's CBR125R was the perfect way to through your bike test. It was cheap, uber reliable, modern and easy to ride. But if you’ve got money to burn, the Honda is hopelessly outclassed.

Five years ago the CBR was fresh and sporty, but today, even with funky HRC colour scheme and gold wheels, it looks are comparable to the best of cheap Chinese imports. Sorry Honda, but that’s how it is when compared to the illustrious company it’s trying to hang with. 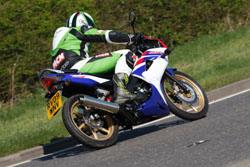 And it’s horribly under-tyred – the front tyres on the other three bikes have more girth than the Honda’s rear – and the IRC supplied rubber borders on Teflon coated. Chasing the others there’s a king-sized sensation of feebleness from the front brake, forks and chassis.

The Honda’s simple liquid-cooled, fuel-injected engine performs with the same brutal efficiency of any Honda engine. No matter how badly you abuse it, like a faithful, slabbering Labrador it will do what it’s told until old age takes its toll.

Yamaha YZF-R125
This is the modern equivalent of the CBR125R. It has big bike looks, ride quality and styling which all come together to give its rider a glimpse of what’s in store after a full licence has been granted. But while we all like the Yamaha, there are two other bikes that deliver the same pleasures with greater purity.

Styled around Rossi’s dominant M1, the Yamaha is, for want of a better word, sharp. Its modern look will snare today’s new riders because it’s so recognisable.

The Yamaha engine is strong but gives no real indication of what it is doing. It could be the same engine from the Honda just with a tad more top end performance from its four-valve engine. It gets to 60mph fairly easily, struggles a little to hit 70mph and then after that every 1mph on top is a bonus. 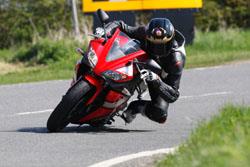 The main difference between the Yamaha and Honda motors is the Yamaha will pull 70mph all day, whereas the Honda’s top two gears see considerably more action uphill and into headwinds.

A tall tail section/pillion perch gives the impression the Yamaha has a considerably taller seat height than it actually has. At 818mm high the Yamaha’s seat is only 42mm taller than the Honda. But where the Honda’s rear shock collapses at the mention of someone riding it, the Yamaha’s remains composed to retain its bigger bike ride quality. Of which there is plenty. It could be the wide bars, spacious seating position and overall build quality.

The downside is the Yamaha lacks ride quality. We mean there’s very little feedback from the front end so you never know how close to the limit the front tyre is. Or how hard you can really corner when emulating racing greats, which is how anyone acts when sat on a bike made to look as if it can cut it. But I guess we are nit-picking here. Yamaha’s YZF-R125 lifted MCN’s 2008 award for Best Sports bike Under 600cc and with good reason it is good.

But there is something better for 2009.

Aprilia RS125R
Today’s crop of racer-replica 125s are extremely desirable – none more so than the Aprilia with its superb braking and rigid chassis. The Aprilia’s polished frame and race bodywork are as effective as Viagra in pumping blood round my tired body.

Old agrees with young once more when it comes to two-stroke over four-stroke power. Aprilia’s RS125 is a very, very polished performer. From the moment the electronic dash flickers into life and the engine starts with familiar smell of a cold two-stroke on choke, the RS125 tells you fun is coming your way. 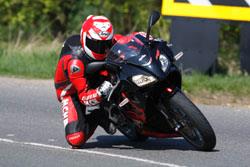 Unfortunately, the unmistakable rasp of a crisp engine is short lived when cold. It coughs, splutters and struggles to pull cleanly until thoroughly warmed. But even when that time comes and the bike’s given its head, the way the tacho needle limply seeps past 8000rpm is greatly disturbing. It doesn’t need us to remind you this bike’s Rotax-supplied engine is restricted to meet legal requirements.

Even so, there is still a step in the powerband to excite anyone. It’s this burst of performance after 7000rpm – even though it is mechanically and electrically neutered – that makes a stunningly created 125cc machine even better.

Cagiva Mito 525
The new Cagiva is similar. Revived from under the wing of MV Agusta, the Mito dates back to 1989, undergoing several makeovers over the interim before reappearing now as the Mito 525. Along with a new Euro 3 emissions compliant engine, it has a new look paying homage to the C594 two-stroke GP500 bikes of Mamola and Lawson. This makes it arguably the sweetest looking 125cc machine out there.

But it is also the most tractable of the two strokers – easily keeping with the Yamaha in the first two gears before pulling ahead. It’s the corner exit throttle control that makes the Mito more thrilling than the Aprilia. Not because there’s a bigger jump in power delivery, but because it’s a smoother delivery. The Aprilia cracks into go fast mode because the engine revs have to be higher to get the desired drive, whereas the Mito rushes forward with precise throttle input. 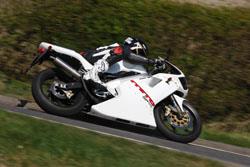 Ok I know we’re talking about piddly 125cc machines that make hard work of carrying a 15-stone rider let alone a pillion, but every little bit of pleasantness helps the performance of a restricted 125. This also includes the chassis and running gear around it.

Decent screen height, usable mirrors and ergonomics meant the old duffers again chose the Mito over the youngsters’ choice of the Aprilia.

Verdict
The two-stroke Aprilia and Cagiva beat their four-stroke rivals in all but practicality. They are intense machines that demand nothing less than 95% concentration and 100% skill to wring the most out of them. Which one is the best for you is difficult to say: both are brilliant and both can be derestricted to release their full potential (approx 21bhp for the Aprilia, 25bhp for the Cagiva). This means not having to buy another bike to make use of the 33bhp allowed during the regulation two-year probation period. The young irresponsible mind inside this old body says go for the Cagiva...