The ‘fine-handling scooter’ ethos has kept the T-Max on the top of the sales charts since it first appeared in 2001 but MCN’s world first test suggests its reign may be limited – by concentrating on performance, Yamaha is lagging seriously behind rivals in terms of practicality.

There’s no doubting the T-Max’s performance though. The T-Max still offers handling and performance that’s nearly as good as a budget middleweight motorcycle, neatly packaged with the convenience of an automatic scooter. What Yamaha has done with fourth generation T-Max is exactly what it did with the other three; concentrate on making it go faster, especially round corners.

The 2012 engine has been bored out to 530cc, has a new fuel injection system, lighter pistons, new camshafts and a whole host of other engine tweaks that add up to a 10% increase in torque, 1500rpm lower down the rev range. More significantly, the enclosed chain final drive has been swapped for a low maintenance belt, and a new cast aluminium swing arm now bolts to an aluminium frame which reduces the unsprung weight at the rear by 35%. The total weight loss is 4kg, bringing the dry weight to 200kg – that’s around 30kg lighter than BMW’s new C600 Sport scooter.

Starts to lose the plot

The T-Max has also acquired more aggressive bodywork, with the headlights now mimicking the enclosed lights of the R6 and R1. Two strips of black plastic on the upper edge of the foot boards are designed to keep draughts from finding their way up trouser legs but they’re also sacrificial if the bike topples over, saving the painted panels from damage. Underseat storage remains disappointingly familiar and not enough room for two lids, though there are two small stowage spaces in the fairing. But for me, this is where the T-Max starts to lose the plot.

The quality of the main bodywork panels is fine but the plastics used for the cubby hole and fuel filler cover is very poor. I’ve eaten takeaway meals that have come in boxes made from sturdier plastic. Every time I opened the lockable right cubby hole it creaked and flexed in complaint. And even if you ignore the space issue under the seat, Yamaha have missed the opportunity to add extra value. There’s a courtesy light in there, so wouldn’t a 12 volt phone charging socket have been a simple, cheap addition?

Looking over the rest of the bike you’re hard pushed to find any innovations to make a scooter rider’s life easier. The screen is adjustable but takes a few minutes and an Allen key to move it to its second position. The trip computer features a useful mpg feature but it’s too small and faint to be used at a glance. The 2012 T-Max had better be an amazing ride...

At 6’5” and 14 stone, my body shape may not have figured in Yamaha’s design plans. The T-Max’s revised and slightly pulled-back bars feel low and even with my feet in the fully forward position on the foot boards my legs are near the bars, and as there’s a lump in the seat it’s impossible to slide back. It all feels a little bit cramped.

Bimbling through heavy traffic the T-Max is well poised and balanced, even over potholes and broken Tarmac. If you’ve ever wondered why scooters are so popular in cities, one of the reasons is their low centre of gravity and lack of weight over the bars makes steering effortless. 200kg simply melts away at walking pace.

Once you’ve threaded to the front of the traffic queue, the motor pulls hard away from other traffic – even conventionally geared motorcycles will struggle to match the T-Max over the first few yards from the traffic lights. After 30mph the performance begins to tail off but it’s still punchy enough for overtakes at motorway speeds. 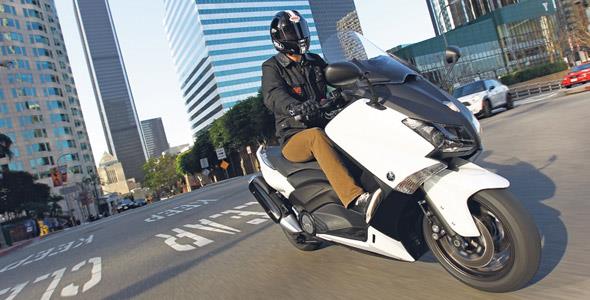 In its element on back roads

Duck down a twisty back road and the T-Max is in its element. Swinging through a chain of hairpin bends, fast changes of direction are easily achieved and once into the corner, stability is excellent. Braking hard and turning into hairpins failed to upset the balance of the bike. Surprising levels of enthusiastic riding can be had, and the T-Max refused to tie itself in knots. Front brakes are the excellent stoppers from the previous model but the rear disc is up from 267mm to 282mm. There was really no need, as the new disc locks too easily and will panic some riders. ABS will be available as an option in February next year.

As there’s less bodily contact with a scooter over a conventional motorcycle you never feel completely in-tune with the machine, and no matter how well the T-Max handles you’re still on top of, rather than in the bike. That’s an issue with all scooters, not just the T-Max, but something to consider if you’re thinking of making the switch.

Yamaha reckons on 6% better fuel economy over the old model. Our test ride took in all types of road from filtering to fast motorway and the on-board trip computer registered 53.18mpg, which if accurate, is adequate. However, given BMW’s expertise with fuelling (its F800 models regularly average over 60mpg), the C600 is likely to have the T-Max beaten here.

At £8807, compared to the competition the T-Max looks expensive, especially if you tick the ABS option estimated to be £500. It’s expected that BMW’s new C600 Sport scooter will cost a huge £1500 less, at £7300, so on price alone the Yamaha will have its work cut out to keep hold of the sports scooter crown.

The changes made to the engine and chassis of the new T-Max are undoubtedly worthwhile and inject a extra dose of performance to what was already a great hyper-scooter. The new belt drive is faultless and the extra 30cc provides useful punch while the new styling gives it an aggressive and recognisably T-Max stance. However, there are serious practical shortfalls: there still isn’t a great deal of storage space (only room for one full-face helmet), and some of the plastic covers feel perilously flimsy. There’s also the price, compared to the competition it’s teeth suckingly expensive. The T-Max is likely to be one of the best performing scooters of 2012, but I can’t see it being the best scooter overall.