Tech guide: How the Honda VFR1200 can switch from V4 to parallel twin

The Honda V4's radical design means that the 200bhp engine’s cylinders can be shut down, turning the V4 into a parallel-twin, so it can sip fuel on the commute and chase superbikes at the weekend.

Honda is giving nothing away. The only official information from the company is that it’s a V4. But our monitoring of patents filed by the firm reveals it’s a radical design derived from the Japanese company’s experience with its V5-engined RC211V MotoGP machine and variable valve control as seen on the current VFR. 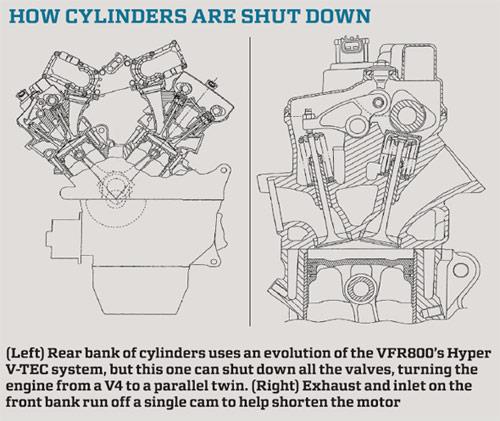 At 1200cc its high-tech design means it should be able to offer power approaching 200bhp, matching Suzuki’s Hayabusa, while clever packaging means it’s much more compact than such a powerhouse has any right to be. Normally, V4 engines have their cylinder banks offset, and conrods from the front and rear banks alternate along the length of the crankshaft.

As a result, the rear bank is much narrower than the front – allowing the rider’s legs to be closer together and making the bike feel as narrow as a 600cc parallel-twin.
The front bank might be wider than a normal V4’s, but there’s plenty of space for extra width in that part of the bike.

But space at the front is limited for the length and height of the front cylinder head, which has to fight for space with the radiator, airbox and fuel tank.

Honda has solved the problem by using a single-camshaft on the front bank, using the same UniCam rocker arrangement as its CRF450 motocrosser to actuate four-valves per cylinder.

The rear head is a more conventional twin-cam arrangement, using the latest development of Honda’s Hyper V-TEC valve shut-off system, as pioneered on the VFR800.

This allows the rear cylinders to operate on either two or four valves per cylinder, depending on the power needs of the rider.

Taking it beyond the current VFR, however, is the fact that all the rear bank’s valves have the shut-off system, rather than just two in each cylinder.

That means the new V4 can shut down entire cylinders, allowing it to run as a parallel twin, using the front bank only. Three servos operate the fly-by-wire throttles, one for both cylinders on the front bank and one for each of the rear cylinders.

Allied to the cylinder shut-off system and a traction control arrangement, they can alter the power delivery of the engine to suit different conditions.