He’s teased with dyno videos, but this is the first time American superbike auteur Michael Czysz has revealed his finished TTXGP competitor, the MotoCzysz E1pc.

Not only does it look the business, but Czysz says it’ll do 0-120mph in 7-8 seconds and have the most advanced battery packs at the electric TT.

That’s as fast as a Suzuki GSX-R1000 and potentially quicker accelerating than the new Yamaha V-MAX, tested by MCN at 8.14sec.

Czysz says: “In the latest video [which you can see below] the bike went from 0–120 in less than 11 seconds and that was with a very slow, 3 second roll on. Plus we were running only 75% of our race battery pack." 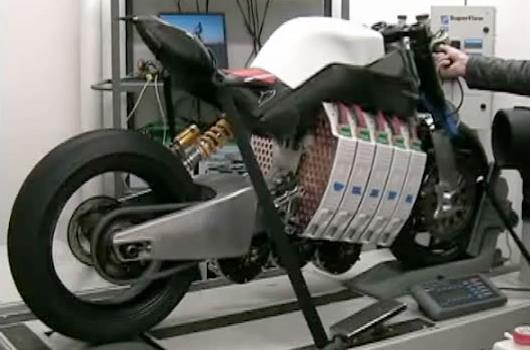 "We estimate that with an aggressive roll on and complete battery pack it’ll do 0-120mph times in the 7 to 8 second range.

"More importantly, this is NOT a drag bike - but a sportsbike, with torque and acceleration in hand.”

The E1pc’s sportsbike aspirations are backed up with oval-section ‘6X’ forks, which flex when leaned over for superior feel, but are rigid under braking, and the carbon-and-alloy frame developed from the firm’s would-be MotoGP competitor, the C1.

Czysz says the bike offers a different vision to its TTXGP rivals, with its ‘hot-swappable’ battery packs.

That means owners will be able to easily upgrade their bike’s performance as technology and funds allow. No prices have been announced for the base bike so far, but Czysz says he aims to make rivals with their ‘locked in’ batteries and motors seem expensive.

Czysz is lyrical in summing up the project that will see a MotoCzysz compete in an FIM-santioned race for the first time: “In less than five months we took a suggestion and turned it into a motorcycle.

"A motorcycle that is unlike anything I have ever ridden. No gas, no oil, no clutch, no need to even warm up the engine – no engine.

"Gone is the age-old ritual of rhythmical throttle blips that can audible seduce a motorcyclist into a pre-ride trance – now your bike waits for you. Enter what may be the next big thing in motorcycles; invisible, nearly silent and magically linear power.”

American Mark Miller will ride the E1pc in the TTXGP on 12 June.