MCN has discovered a secret hoard of 60 £25,000 Foggy-Petronas FP1 road bikes in a bunker in Essex.

Carl Fogarty – race team manager and figurehead of the ill-fated FP1 project – said when told the news: “You’re joking – that’s amazing!” It had been thought – and stated by the team – that the bikes were shipped to Malaysia five years ago and disposed of. But in fact virtually all the bikes initially produced to homologated the FP1 for WSB racing are still on UK soil.

The collection – worth around £2m – is held in a state of suspended animation awaiting, with the bikes’ owner – Malaysian oil giant Petronas – keen to draw a veil over the whole episode. The firm burned £30m on a WSB program that was intended to kick-start a Ducati-sized bike manufacturing business in Malaysia, but in fact petered out with a 21st place championship finish in 2006. 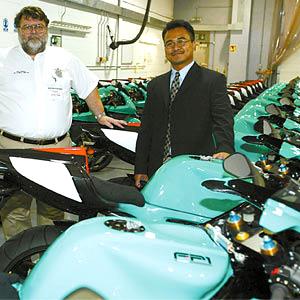 The bikes were manufactured for Petronas by engineering firm MSX International in Basildon in Essex in record time in 2002, around engines designed by Austrian firm Suter Racing. The idea was that the production process would then be replicated in Malaysia and form the start of a range of higher and lower-spec bikes running to ten thousand and more. 75 road bikes were built in Essex, followed by another 75 in Malaysia six months later, where this famous homologation shot was taken (left).
Though the business that produced this first batch has since changed hands the bikes are still there, now in possession of engineering firm Arrk R&D, which also retains key MSXI staff who worked on the FP1. Tony White is one of them: “They were perfect” is all he will say about the bikes, the existence of which Petronas gagging orders prevent him from acknowledging.

Arrk’s Tony White doesn’t agree: “It was a great project to work on that culminated in the build of 150 great bikes – we had everything done down to the owner and dealer manuals.”

In fact the FP1 did eventually go on sale in 2005 – but only in one dealership, in Malaysia, called Naza Bikers Dream - where a pair were still for sale in 2009 for £31,433 each. How long this treasure trove of a tomb will remain unopened lies at Petronas’ discretion. And it’s not a volume in their history they appear keen to exhume.