Ducati is planning a ‘frameless’ future for its road-going superbikes – with the firm set to bet the farm on an aluminium version of its GP10’s revolutionary carbon design, MCN can reveal.

A new patent application purports to protect the composite semi-monococque design – which bolts headstock to engine via a structural airbox rather than a frame – used on its race-winning GP9 and new GP10 MotoGP bikes. But multiple references to road-going and production concerns irrelevant to MotoGP confirm it has a broader brief – to safeguard the transition to road bikes of a technology Ducati clearly feels represents sports bikes’ next great leap.

MCN has also learned that tests on aluminium-framed versions of the GP bike early last year were conducted with the firm’s next generation road bikes in mind. The price is Ducati’s trademark trellis – but if the gains are as great as the firm believes, it’s going to be worth it.

Ducati debuted its carbon-framed GP bike in 2009, with the stated aim of ‘abandoning the classic concept of the chassis as the element that connects all other elements in favour of a design in which the engine is the central element’. The fact was, Ducati had pushed its trellis design to the limits of stiffness. The frame of the GP8 – the last of the trellis-framed GP machines – was so dense with tubes and welds, it had virtually no gaps, and still the race team were struggling for torsional stiffness. Switching to a box-section carbon ‘stressed airbox’ in place of the trellis solved the problem at a stroke.

The shift in philosophy led the firm to discover a series of benefits it now views as making an overwhelming case for change in its superbikes, where it must continually seek innovations to justify its premium price tags.

In order to protect its ideas, Ducati has to reveal in its application the full extent of its ambitions. That, the firm says, includes introducing the design to bikes with single-sided swingarms, pillion seats and in relatively cheap, multi-piece aluminium form – none of which you can expect to see in current or future Ducati MotoGP machines.

Insiders familiar with Ducati’s production process confirm the changes could be implemented without great difficulty. Ducatis are already built around the engine, which is supported on a pole as it moves along the production line. Moving to a Honda Pro-Link-style rear sub-assembly (shock and damper installed within the swingarm, like on the GP bike) could neutralise the production cost increases completely.

A new generation of motor will be required, but with the Evoluzione 1098/1198 motor in middle-age, work is already well underway – in collaboration with Piero Ferrari’s firm HPE – on a successor with mounting points to accept the stressed-airbox design. 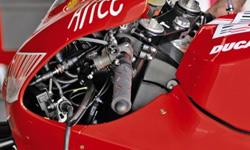 Crossover between racing and road departments within Ducati has never been greater. Former Ducati Corse boss Claudio Domenicali is now in charge of all the firm’s road and race machines, and Andrea Ferraresi – project leader for the Desmosedici RR road bike – runs the design department. Both have been encouraged to press ahead with the frameless philosophy after the warm reaction to the trellis-ditching GP9. Fears the Ducati’s hard-to-ride reputation might be blamed on the unforgiving nature of the carbon frame haven’t been realised, and there’s no evidence that the Ducatisti lament the loss of the company’s trademark tubes.

The switch also conjures a future for Ducati’s weight-loss program. Huge gains have already been made on the engines, with painstaking work on the castings, but without moving to exotic materials or more fragile designs for crank and transmission, weight savings there are largely exhausted. Comparatively, losing 4-6kg from the frame is a vast amount.

Peter Williams, inventor of the cast wheel and long-time monocoque advocate, says: “The design allows for a much more compact motorcycle that’s stiffer and more mass-centralised. The tubes they’ve been using for years don’t look like they take up much room, but they really get in design. This will be an excellent step for them to take.”