This is Prada heir Lorenzo Bertelli’s new toy – the new Ducati 1198R-powered Vyrus 987, as delivered to him by Vyrus boss Ascanio Rodorigo on Christmas Eve.

Rodorigo borrowed the bike back to show off at the weekend’s Verona Motor Bike Expo (looks like they took the rug too). 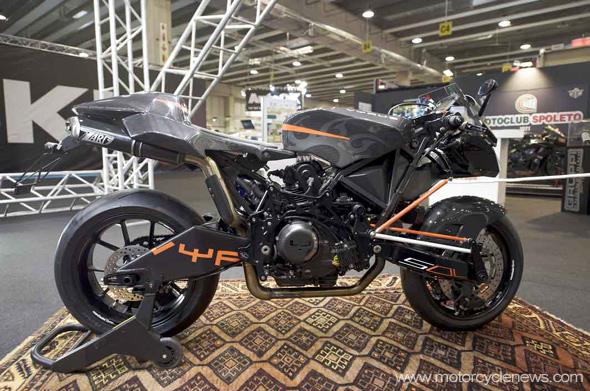 Previously set to be the world’s most powerful production bike, the firm has decided not to supercharge the 987, saying the near superbike-spec 1198 engine is plenty powerful as it is.

Tiny Rimini firm Vyrus – whose customers include Tom Cruise – run a tight-knit and secretive operation, but MCN has managed to obtain footage of the 987 in testing. It’s not Top Gear quality viewing, but it does feature test rider Mauro Hulkino doing his best impression of an Italian Stig, and it is the only footage in the world of the latest iteration of a fascinating and seductive machine.

Each Vyrus is hand-made, uniquely specced and takes over 100 days to produce. 20 year old Prada millionare Bertelli paid over £76,000 for this 184bhp carbon-clad creation.