There wasn’t much wrong with Honda’s CBR1000RR-R and SP superbikes – they were brand-new just two years ago, after all – but Honda has improved them anyway.

And, with 2022 marking 30 years since the launch of the first, game-changing CBR900RR FireBlade, there’s also a new limited-edition Fireblade SP 30th Anniversary which pays homage to the 1992 original.

The updates focus on improving mid-corner drive and acceleration. So, although the engine is little changed and still delivers peak power of 160kW (214bhp) at 14,500rpm and max torque of 112Nm (83ftlb) at 12,500rpm, Honda has finally addressed its widely criticised over-tall gearing which hindered mid-range or real-world acceleration and resulted in it being capable of over 130mph in just second gear!

The rear sprocket of the 2022 model is now significantly larger, going from 40 to 43-tooth, lowering gearing overall.

In addition, intake and exhaust gas flow on both bikes has been improved. Airflow into the filter has been adjusted to ‘control the direction of intake air separation and vortex generation’.

The intake ports have been narrowed to increase airflow speed so improving ‘filling’ efficiency. While the four-into-two-into-one exhaust gets a new middle section to optimize flow into and through the catalyzer. The compression ratio of both has also been raised from 13.2 to 13.4:1.

But the changes don’t end there. The Fireblade’s already sophisticated nine-way traction control – Honda Selectable Torque Control (or HSTC) – has also been upgraded. For 2022 the gap between the intervention timing and ‘slip rate’ has been reduced for smoother, more intuitive control, thanks in part to continuing development with HRC’s superbike riders.

The higher-spec SP version, meanwhile, which is largely distinguished by its race-quality semi-active Ohlins suspension and Brembo brakes, gets all the same mods but also slightly reduced spring load in its ride-by-wire throttle for improved response plus is now further distinguished by both SP colour options getting gold wheels.

Finally, the SP will also be available as a limited-edition, 30th Anniversary model featuring a Tricolour homage paint scheme as designed by Hiroaki Tsukui, who also designed the original.

It combines the modern RR-R stripe with the original’s ‘brushstroke’ style, a blue rear seat, a special Ring of Fire screen animation on start up, 30th Anniversary logos on the fuel tank cover, Smart Key fob and Akrapovič can and unique serial number laser-engraved on the top yoke.

Thirty years of Fireblade magic: Special edition to mark the bike that changed our world 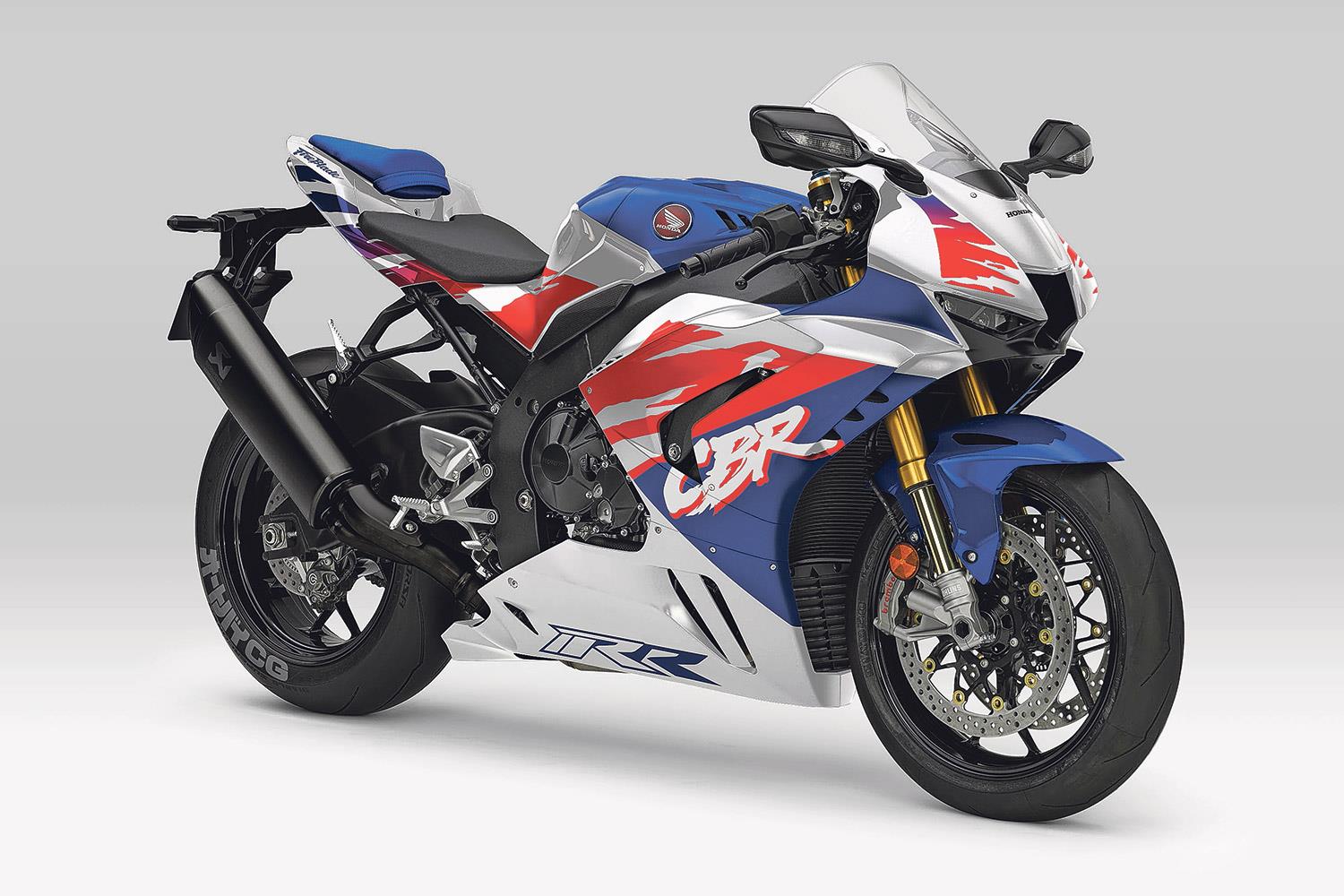 Honda are working on a special edition Fireblade to celebrate the 30th anniversary of the original model. The CBR900RR FireBlade launched to critical and commercial acclaim in 1992, ushering in a new era of superbike that combined the power of large displacement machines with size nearer to that of a 600.

Created by Tadao Baba, it was also much lighter than the competition, weighing less than 2kg more than the CBR600 and 34kg less than its nearest rival, the Yamaha FZR1000. To honour that machine Honda are believed to be releasing a special edition CBR1000RR-R SP with an homage paintscheme.

Mechanically it’s unlikely much will have changed, especially with the main components, so we can expect 214bhp from its 999cc inline four. The electronics package is likely to be the same too, so expect more safety aids than you can shake a stick at, all of which will run through the 5in full colour TFT.

As it’s the SP model it already has lots of flash components, including semi-active Öhlins, Brembo Stylema brakes and lightweight wheels. However, there’s a good possibility things might get even fancier in this department.

Three years ago Honda Japan unveiled a special edition HRC version of the then top of the range SP2, which had Nissin brakes, lightweight OZ wheels and carbon fibre bodywork. It’s possible we’ll see something similar here for the Blade.

Of course this isn’t the first time a classic paintjob has returned, nor is it Honda’s first anniversary Blade. The firm released a 20th anniversary model in 2012, which cost just £12,000 (those were the days eh?). There was also a return of the famous ‘Urban Tiger’ paintjob in 2014.

There’s been nothing official from Honda, but sources in Japan suggest we’re likely to see this bike unveiled in the coming weeks with order books opening soon after.