Bagger is better: BMW supersize the R18 with Transcontinental and R18B

They’re very similar – the R18B is basically a slimmed down version of the Transcontinental without a top box – but each one is aimed at a different person.

Again like the R18 both bikes share a twin loop steel frame, which echoes the designs BMW have been using for yonks. They also carry over the cantilevered softail rear end although both bikes get a 30% boost in rear suspension travel to 120mm for increased comfort.

The fuel tank has also grown on both models from 18l to 24l, so a range well in excess of 200 miles should be perfectly achievable.

And it should be easy enough too as sat atop the forks is a giant fairing to protect you from the elements. It’s the same size on both bikes but the Transcontinental comes with a taller screen as standard, a set of wind deflectors plus some vents in the fairing which you can open up if things get a bit steamy.

The riding position for both is also similar with mid-mounted food controls. The Transcontinental gets a huge great seat (which is heated as standard) and footboards, whereas the Bagger comes with a slimmer seat and more traditional footrests.

The Transcontinental also takes the lead with storage. Both bikes come with 27l panniers (or bags…) either side but the Transcon adds a 48l top box, which is big enough to swallow two full face lids.

Where things get really exciting are in the electronics department. For a start both bikes come with cruise control as standard but it’s possible to add ‘active cruise control’ as an option.

Active cruise uses radar to judge the distance to the vehicle in front and slow down or even brake if necessary. Hidden behind the giant batwing esque fairing on both bikes is a whopping 10.25" Full HD colour TFT screen, which does virtually all the control duties.

It’s bordered by four classic analogue dials that give fuel (finally!), speed, RPM and ‘power in reserve’, which is a feature they’ve nicked from fellow BMW brand Rolls Royce.

In effect while you ride along it lets you know at any one point how understressed the engine is. Probably makes more sense showing the stats of the 6.75L V12 in the Phantom, which will do motorways speeds barely past idle but there you go.

The really nifty part of the dash is the navigation, which just like the R1250RT runs via Wi-Fi on a dedicated app on a smartphone. To keep you going for longer, there’s a little cubby hole on the tank, which stores you phone and wirelessly charges it as you go. Smart eh?

Again just like the standard R18 there are three riding modes (Rain, Rock and Roll) plus a few other nifty optional extras such as hill start and reverse (although this should almost be viewed as a necessity as the B weighs 398kg while the Transcontinental a mind boggling 427kg).

As standard both the Transcontinental and the Bagger get a sound system crafted by the experts at Marshall. However if you’re going deaf, or enjoy upsetting your neighbours, there are also some Stage 1 and Stage 2 upgrades. The result is up to four loudspeakers, two subwoofers, 280w of power and probably an ASBO to go with it.

Bikes are to be expected in dealers by September 2021, with R18B prices starting at £21,500 and the R18 Transcontinental at £23,300, which is actually a damn sight cheaper than expected and (while it might not exactly sound cheap) it’s a few grand less than similar American machines.

BMW bags more of the limelight: New R18-based baggers are fully-loaded for touring

First published on 26 May 2021 by Jordan Gibbons

New spyshots have emerged that show BMW’s two new baggers are all-but finished. The models are based on the R18 cruiser and are believed to be called the Bagger and Transcontinental. Both build on the current R18 by adding more tech and more provision for touring.

As is evident from the photos, as well as type approval documents seen by MCN, both are powered by the 1802cc boxer twin producing 89bhp at 4750rpm and 116.5lb.ft at 3000rpm. Although the frame may look similar to the R18, it’s been stretched to account for the fairing and passenger seat, making it around 120mm longer than the current model.

Inside the fairing you can see a huge TFT dash, as well as four analogue gauges plus speakers. Having an ‘infotainment’ system is a key part of the large bagger appeal and we’d expect BMW will want the bikes to excel in this area.

The TFT is likely to be similar to the huge one fitted to the current R1250RT with modular info screens. Above the headlight, neatly tucked into the batwing, you can see the tell-tale box of the cruise control radar receiver, again likely to be the same unit found on the RT.

Long-distance comfort will be key. The tank is visibly enlarged and we’d expect it to be around 20 litres brimmed. At the top of the tank is a small storage compartment, likely designed to take a smartphone with wireless charging to connect to the TFT (once more over from the RT). 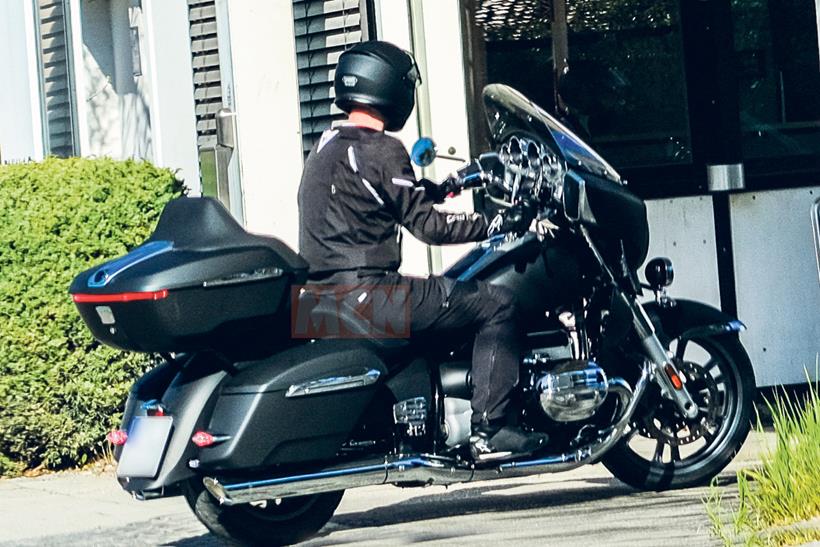 Neither machine is a lightweight. The current R18 comes in at 345kg, with the Classic at 365kg. The Bagger is expected to come in at around 400kg and the Transcontinental will be around 430kg, complete with fuel.

Both models have 19in front wheels unlike the 16in on the touring orientated Classic, as well as cast units front and rear for tubeless compatibility. The suspension unit is under the seat, so we’d expect a remote preload adjuster behind one pannier for convenience.

There’s been no official word from BMW about either model yet but we’d expect them to be unveiled later this year. Don’t expect much change from £24,000 for the Bagger and £27,000 for the Transcontinental. 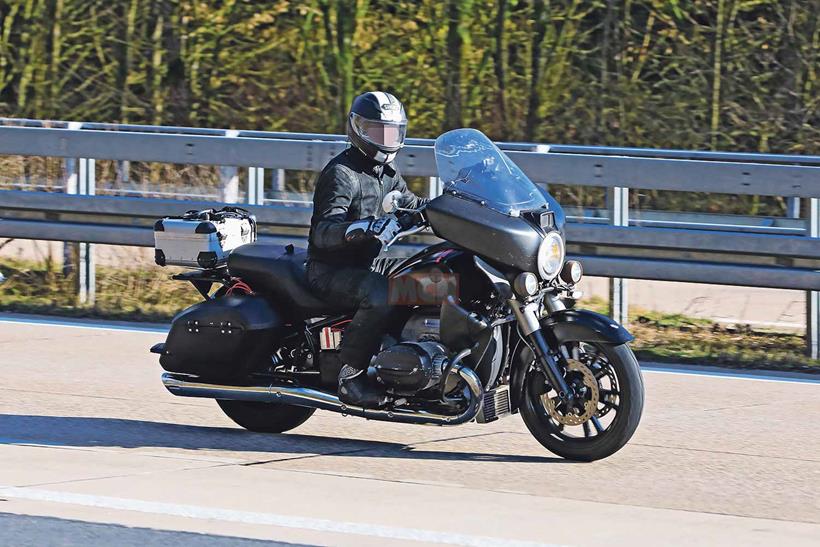 Everything about BMW’s R18 cruiser is huge. The pistons are the size of mortar shells. The intake valves are wider than the entire cylinders of a cruiser at the other end of the size scale, Yamaha’s XVS125. But BMW have two even larger versions in the pipeline for 2022.

The next two R18 models – dubbed the R18 B and R18 Transcontinental – are going to dwarf even the current R18 and R18 Classic with dimensions that the largest Harleys can only dream of. 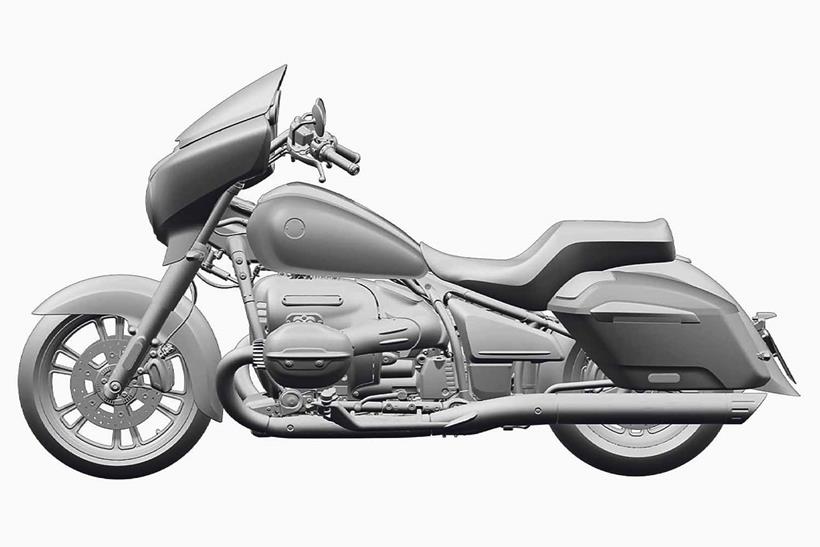 The existence of a touring-oriented R18, with hard side cases and a wide 'batwing' fairing, has already been betrayed by spy shots, but new type-approval docs filed by BMW in Europe and the USA have revealed technical details. The bike seen in spy shots is the R18 B – presumably standing for 'Bagger' – and will be joined by an even more monumental version dubbed the 'Transcontinental'.

Size-wise, the B is 2560mm long, making it 85mm longer than a Honda Gold Wing. The Transcontinental, which is expected to gain an overhanging top case at the back, stretches that to 2640mm.

The story is repeated when it comes to width, with the docs showing a minimum girth of 930mm for the two BMWs and a maximum of 970mm, probably reflecting optional handlebar designs. A Gold Wing? Just 925mm. 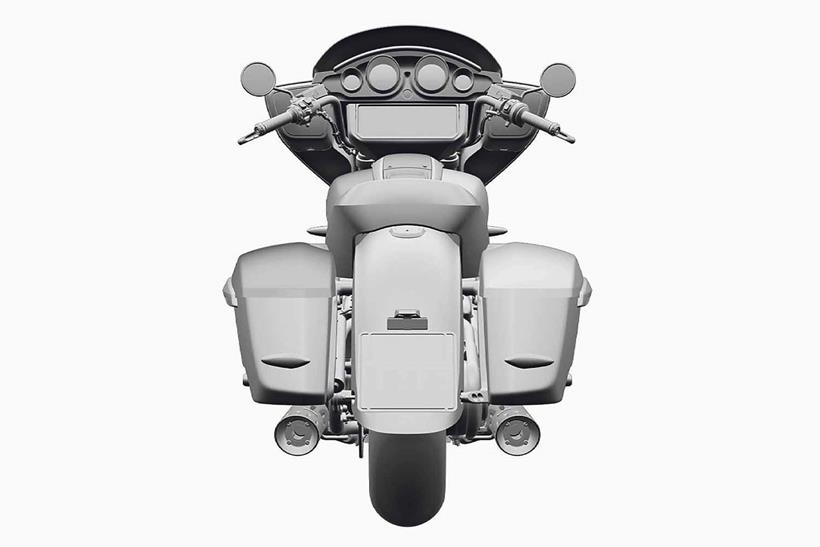 BMW R18B and Transcontinental on the road