A bit of grass tracking and 14th on the grid. Still, it was far better than Donington and the bike was spot on.

Sunday’s race was fairly relaxed; I got in the grove and was sitting comfortably holding my position.

I didn’t want to push due to the injury, but I couldn’t resist, made a pass or two but ended on the grass at Park and lost a few positions. Still 14th wasn’t bad and I was more than happy so headed to the bar to watch the charity bike race. 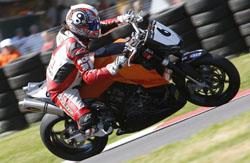 Come Monday my left shoulder was killing me as I woke in my friend’s van. Cadwell looked amazing, I’ve never seen it so busy.

I lined up with the British Superbike boys for painkillers; they gave me enough to send a small pony to sleep. But by the third lap I was in agony again.

My laps times were poor, to be honest. There was nothing wrong with the bike, it was all down to me, but I’d have ridden around all day in front of that crowd the feeling was that great. 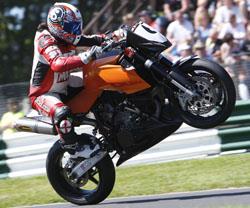 Looking back, the bike was perfect. OK, the tyres slid around, but they do for everyone. It was a great weekend, I’m just disappointed with the end result.

Maybe next time, then, if I can convince KTM into letting me have another go…