Snetterton BSB: Shakey back where he left off

Shane ‘Shakey’ Byrne has resumed where he left off before the six week break in the MCE British Superbike season, taking the top spot after the opening day of practice at Snetterton to finish 0.128 ahead of the wildcard Honda of Julien Da Costa.

Bathed in beautiful sunshine at the Norfolk track, Byrne was able to set his 1:48.181 lap early in the session, going fast on lap four of sixteen and leaving the rest of the pack to chase him down - unsuccessfully.

Da Costa was a surprise second splice as the Honda squad return for the first of four scheduled wildcard appearances, while Jakub Smrz was an equally impressive third at the fast track, showing his improved speed on the Millsport Ducati after rule changes allowing them to run a higher-spec piston in the quest for equalised rules.

Josh Brookes was fourth on the Milwaukee Yamaha, fresh from the Isle of Man TT, while veteran Chris Walker, who tested at the track last week with his Lloyds British GBmoto Kawasaki team, was fifth. James Westmoreland was sixth, with the Buildbase BMW making it six manufacturers filling the front two rows. 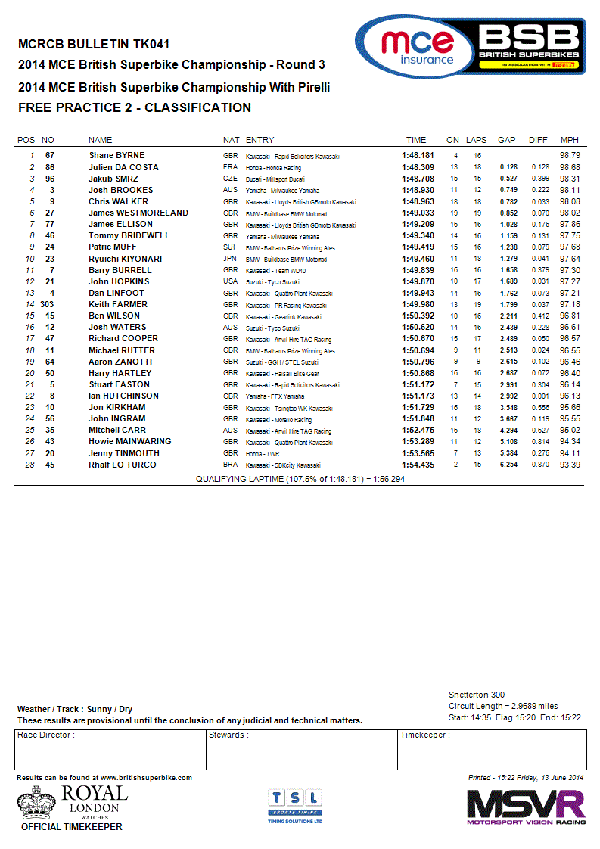