The advert was run in big Italian newspaper Il Messagero last week and featured a headshot of Valentino Rossi and underneath his portrait it read:  ‘Two million places, paying only the taxes.’

There was also a speech bubble coming from the 28-year-old Italian’s mouth that says: ‘I can come back with Ryanair and I only have to pay the tax.” 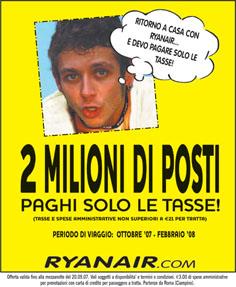 Valentino Rossi was asked about the advert, which has apparently become the talk of Italy, at a news conference on the eve of the Japanese MotoGP in the Twin Ring Motegi.

“I don’t see this. It’s a strange, strange idea because they don’t say nothing to me.

“Maybe they want to help us pay the fee. I think this is a good way for it,” said Rossi, with his Fiat Yamaha team confirming he had instructed his lawyers to take legal action against Ryanair.

Valentino Rossi is currently embroiled in a £40m tax investigation by Italian authorities.