Valentino Rossi: 'My work at Yamaha is finished’

Valentino Rossi said the time was right for him to complete a lucrative switch to Ducati in 2011.

The Italian icon will partner Nicky Hayden in the Bologna factory’s official MotoGP squad having finally made it official that he will be leaving Yamaha at the end of the current campaign.

Rossi’s signing for Ducati was first revealed in the June 30 issue of MCN.

The nine-times world champion released a short hand-written statement tonight some three hours after finishing fifth in the Czech Republic Grand Prix at Brno (see below for translation). 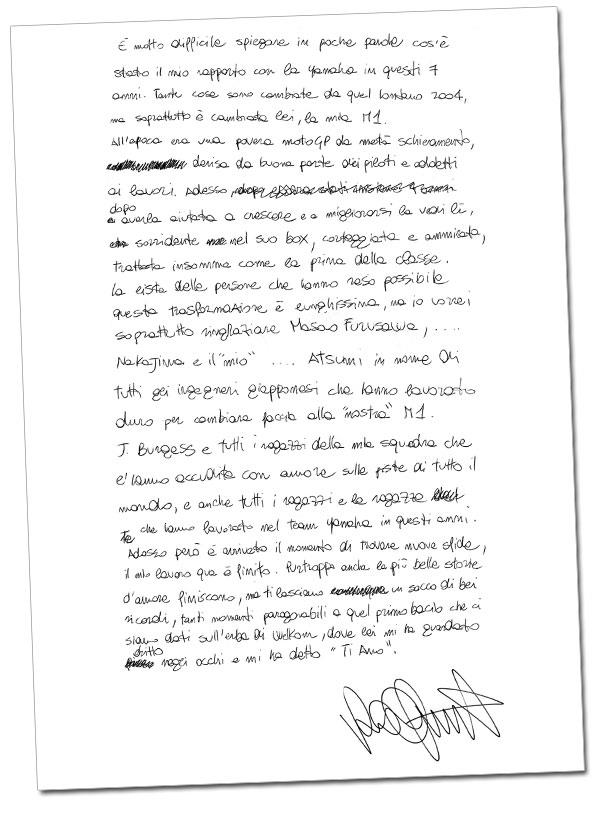 He said: “It is very difficult to explain in just a few words what my relationship with Yamaha has been in these past seven years. Many things have changed since that far-off time in 2004, but especially ‘she', my M1, has changed.

"At that time she was a poor middle-grid position MotoGP bike, derided by most of the riders and the MotoGP workers. Now, after having helped her to grow and improve, you can see her smiling in her garage, courted and admired, treated as the ‘top of the class'. The list of the people that made this transformation possible is very long, but I would like to thank anyway Masao Furusawa, Masahiko Nakajima and ‘my' Hiroya Atsumi, as representatives of all the engineers that worked hard to change the face of our M1.

"Then Jeremy Burgess and all my guys in the garage, who took care of her with love on all the tracks of the world and also all the men and women that have worked in the Yamaha team during these years. Now the moment has come to look for new challenges; my work here at Yamaha is finished. "Unfortunately even the most beautiful love stories finish, but they leave a lot of wonderful memories, like when my M1 and I kissed for the first time on the grass at Welkom, when she looked straight in my eyes and told me ‘I love you!'"