Pol Espargaro has romped to victory in a red-flagged Moto2 race at Motegi, lifting the world championship in the process as Scott Redding, already riding injured, was wiped out in a first lap crash.

Espargaro’s teammate Tito Rabat high sided coming out of turn two, leaving a helpless Redding to plough into the Spaniard’s Kalex machine. Alex Marinelarena, also brought down in the incident, needed medical treatment at the track, bringing out the red flags.

All three riders were eventually passed fit by the medical teams, but Redding saw his title hopes fall away as his machine was too damaged to make the restart. The one piece of good news that the Brit can take is that despite an ugly crash, he has not sustained further damage to the wrist he broke only a week ago.

From the restart, Espargaro was able to take the lead on the opening of the 15 laps from pole man Mika Kallio. He was able to hold off the advances of Redding’s Finnish teammate until upping the pace and clearing off to take the win by over a second, with Thomas Luthi a further two seconds back to take the final podium spot.

Gino Rea finished in the points, in 14th place for his second Grand Prix in a row, while fellow Brit Danny Kent sat out the race after breaking his collarbone in this morning’s extended warmup session.

With the non-finish from Redding, Espargaro now has an unassailable 41 point lead. With Rabat 20 points behind Redding, the MotoGP bound rider needs to score only five points to ecure second in the championship at Valencia. 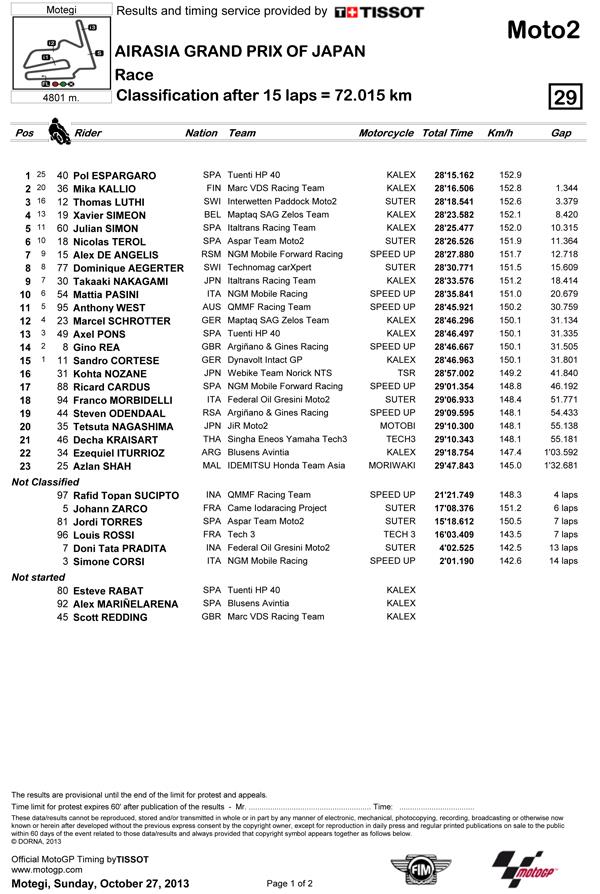