Alex Marquez has taken his debut Grand prix win at Motegi, beating Maverick Vinales on the last lap for his maiden victory, while title rivals Luis Salom and Alex Rins both crashed out of the race.

A crash-filled first lap saw the first drama of the race, as Isaac Viñales appeared to blow the championship wide open by crashing out and taking championship leader Luis Salom with him. Trying to squeeze into a non-existent gap, Viñales highsided clean over Salom before his machine wiped out the Red Bull KTM rider.

However, the chaos allowed the usual group to break away, albeit minus Salom, with Alex Marquez, Maverick Viñales, Alex Rins and the Honda of Jack Miller pulling away immediately.

Before long the power of the KTMs left behind Miller, as the front three continued to trade places on almost every lap. However, with the trio costing themselves time while battling, Jonas Folger was able to bridge the gap forwards to them, closing first on the Australian and then the leading group.

Salom, who had been able to restart, rejoined the race in last. A series of fastest laps of the race allowed the Mallorcan to recover as high as 26th place, until a big highside at turn four cost him his first non-score of the season and handed the title lead to Rins.

The drama was far from over, though. With the leading three settling down and pulling away from Folger again, it looked like a closing lap battle was on the table until the championship was turned upside down again as Alex Rins highsided out of third place, rejoining in 28th place.

With Marquez looking to win his first Grand Prix as well as taking valuable title points off Viñales for his teammate, the pair started scrapping in the closing laps, switching places multiple times. A mistake from Viñales at the hairpin allowed Maquez through, though, taking the win from Folger, Olivera, Fenati and Miller, while John McPhee had his best ever GP result in seventh.

With one Spanish round left, the championship is now wide between the three Spaniards at the front. Salom holds onto the title lead on 300 points, with Viñales second on 298 and Rins only three points further back. 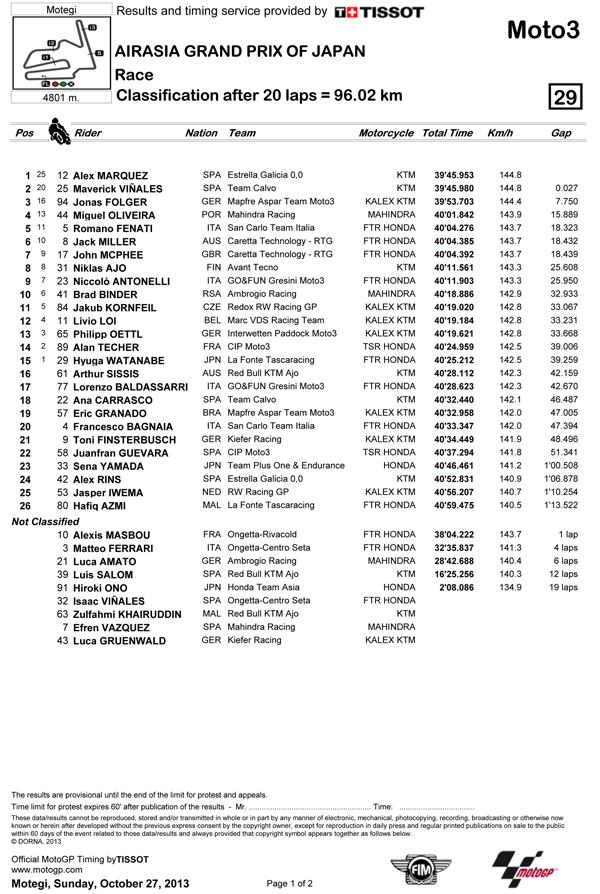