Jorge Lorenzo has kept the title fight alive to the last round of 2013, as he took a dominating win from the Repsol Honda duo of Marc Marquez and Dani Pedrosa on Honda’s home territory at Motegi.

With Lorenzo making a flying start, he was able to lead off the line, with Valentino Rossi slotting into second ahead of the Repsol pair of Marquez and Pedrosa. With Lorenzo clearing off at the front, the notoriously hard to pass Rossi was playing the perfect teammate role holding up the Hondas, until a mistake ran him wide and let the duo through.

However, running wide was only the first of Rossi’s problems, and what looked like recurring braking problems soon ran him wide a second time, running deep into the gravel and demoting him back to eleventh place.

With Rossi gone from the fight and despite the fastest lap of the race, Lorenzo’s advantage had disappeared by lap four, with only a second covering the podium fight. However, having caught the Yamaha man, Marquez and Pedrosa were unable to make use of their position, settling down behind Lorenzo and matching his pace.

With ten laps to go, though, Marquez made the first determined attack on Lorenzo, and although the reigning champion was able to hold him off, the upped pace quickly distanced Pedrosa in third.

However, despite initially having the pace to run with Lorenzo, a series of mistakes from Marquez just broke the tow from the Yamaha, and he was able to pull away for the win on Honda home turf, with Marquez second and Pedrosa third.

Fourth and fifth were the satellite Hondas, with Alvaro Bautista blasting past Stefan Bradl early in the race to eventually pull out a three second lead.

After a qualifying disaster, Cal Crutchlow and Bradley Smith were able to recover to a reasonable sixth and seventh. The pair, after coming though the grid and battling early in the race, were demoted only late in the race by a recovering Valentino Rossi.

Michael Laverty was nineteenth on the PBM Aprilia, while his teammate Damian Cudlin was 21st on the team’s own machine.

Aleix Espargaro was incredibly lucky at the half way point, having to jump off his Aspar Aprilia from twelfth after a brake failure. He was joined in the gravel by Claudio Corti, who was able to rejoin the race and finish. 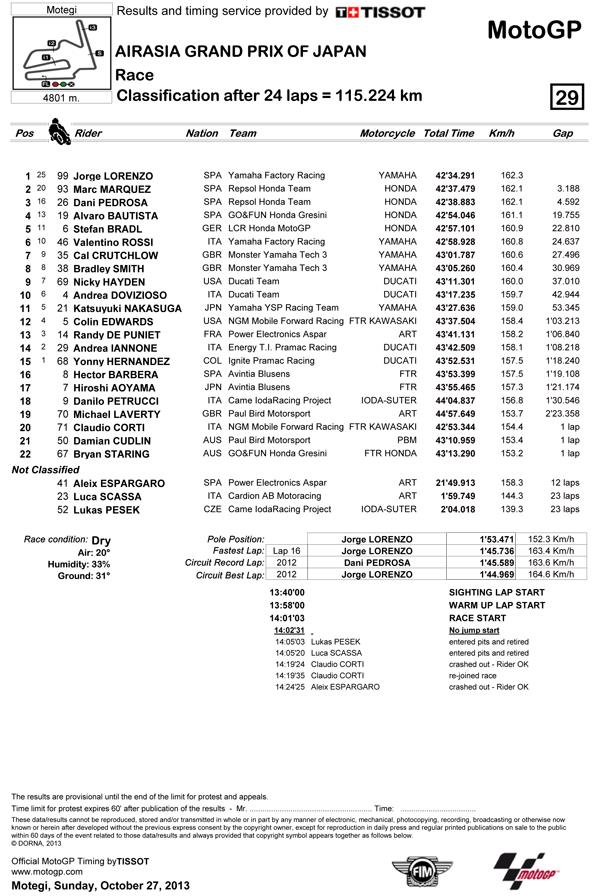