Marc Marquez has once again blitzed the entire grid to take his fourth consecutive pole position, leaving it until the very last end to put in a lap under the pole record and 0.4 faster than anyone else.

Jorge Lorenzo, who led the session for most of the 15 minutes, was second, but was again unable to do anything to match his fellow Spaniard, while Marquez’s Repsol Honda teammate Dani Pedrosa was third.

Valentino Rossi was once again in the fourth place he has grown to hate, ahead of Aleix Espargaro and best Ducati Andrea Dovizioso.

Espargaro looked like a contender for the front row, utilising the super-soft tyre only available for the Open class bikes, but a front-end crash with three mintues left in the session left him unable to improve on fifth.

Colin Edwards was an excellent eleventh, making it into Q2 for the first time this season as he responds on track to rumours in the Italian press that this could be his last race in the class.

Cal Crutchlow will start from 14th, failing to move forwards from the Q1 session as he continues to struggle to brake with his badly broken right hand, while Scott Redding was 18th after a qualifying crash prevented him from finishing higher.

Michael Laverty was 21st and Broc Parkes 23rd on the British PBM machines. 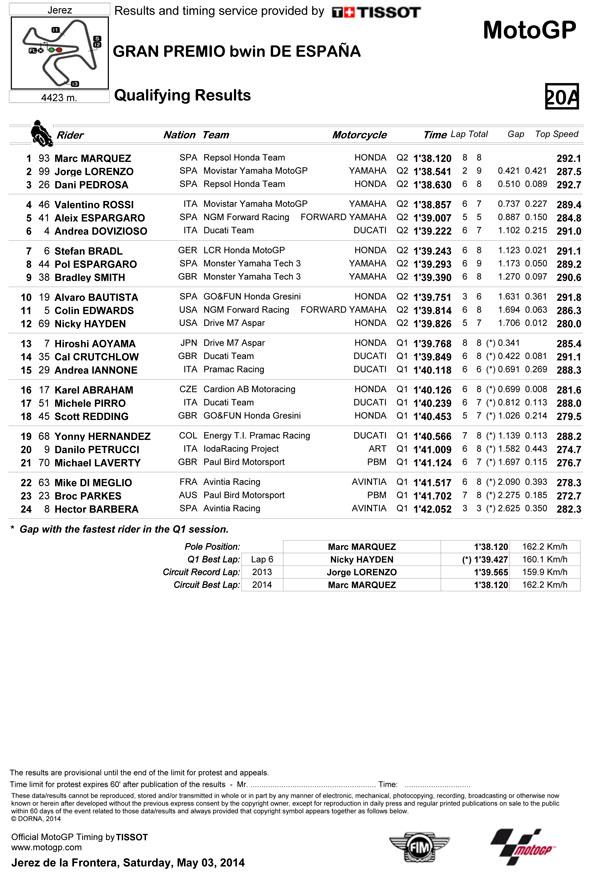