Marc Marquez has made it lucky win number thirteen, setting a new record for the premiere class as he cruised to the victory ahead of Valentino Rossi and teammate Dani Pedrosa.

Marquez was a slow starter from fifth on the grid, with Andrea Iannone a surprise early leader. However, before long the world champion picked his way through the field, passing the Italian duo to pull away.

Rain in the early stages of the race brought out the white flags to allow the riders to switch bikes, but only Iannone and Jorge Lorenzo took advantage of it. The decision proved disastrous, leading Lorenzo to retire to the pits with five laps to go, handing Rossi second in the championship.

Further back, the factory Ducatis of Andrea Dovizioso and Cal Crutchlow looked like early podium contenders, before settling into a close battle between themselves. Dovizioso won out, taking fourth from the Brit on his last race on the Ducati.

Pol Espargaro won the battle for sixth, taking the spot in both the race and the championship after a crash from Bradley Smith cost him it, as well as seventh to the second Espargaro brother. Smith took a single point in fourteenth.

Aleix Espargaro finished behind his brother in seventh, followed by Stefan Bradl, an excellent ride from Michele Pirro on the testbed Ducati, and another top ten for Scott Redding on the customer Honda.

Michael Laverty was nineteenth on his last outing on the PBM Aprilia, one place ahead of teammate Broc Parkes. 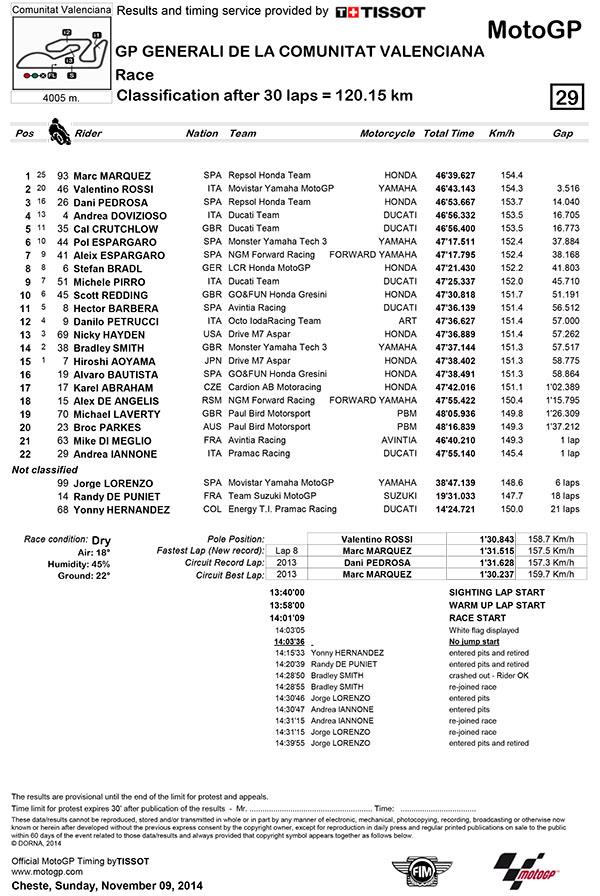