Alex Marquez has taken the fight for the Moto3 crown firmly to homeboy Jack Miller by comprehensively out-qualifying the Australian and taking pole in the process. Marquez ended the session only 0.014 ahead of teammate Alex Rins, but well clear of Miller, back in eighth.

Rookie Juanfran Guevera completed the front row, but row two was dominated by the British duo of Danny Kent and John McPhee in fourth and fifth, less than half a second off the pole man. Efren Vazquez completed the row.

Jasper Iwema was seventh, with Miller sandwiched between his Mahindra and Aleix Masbou in ninth. Romano Fenati made up the top ten.

Speaking after the session, Marquez said: "Starting from the front row is always positive. Today's qualifying session was quite dangerous and complicated, because there was a big group of riders. It will be essential to make a good start tomorrow's race, but more importantly to enjoy it. Tomorrow I think we'll have a race with a very large group. We have good pace, although I do not know if this will be important for tomorrow, because there will be a large group.” 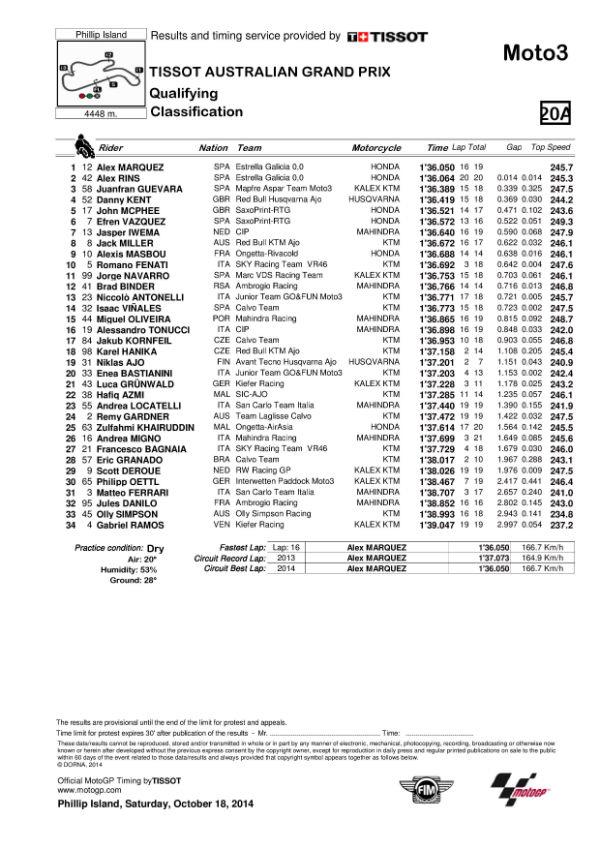