Marc Marquez has cruised to pole position at Philip Island, taking the number one spot by 0.234 from a surprise performance from Cal Crutchlow, after rain hit the Q2 session at the seaside circuit.

Crutchlow was able to time his fast lap just right after a shower of rain disrupted the session, and was able to finish up only 0.008 ahead of Jorge Lorenzo. It was a good day all round for the Brits, though, with Bradley Smith also leading the second row in fourth.

The Tech 3 Yamaha of Smith was just ahead of Dani Pedrosa, who had a difficult session, had to work his way forward from the earlier Q1 session for the first time. A collision with Karol Abraham in free practice left him struggling to catch up, but he cruised forwards from Q1.

Aleix Espargaro rounded out row two, while row three was led by the semi-factory Ducati of Andrea Iannone. He led Valentino Rossi and the second Espargaro, Pol, on the Monster Tech 3 Yamaha.

After taking his twelfth pole of the year, Marquez said: “Today I felt pretty good and that's important, because we found it hard yesterday and I was a bit too far off the pace. We improved a lot today and were riding more comfortably. We expect a hard-fought race tomorrow, but I just have to enjoy it. Above all, it will be difficult to stop both Jorge and Valentino, who seem to have the fastest race pace. My focus on track and ambition are the same as ever and we will try to be at the front, but also over the weekend we have been trying different things out with next season in mind.” 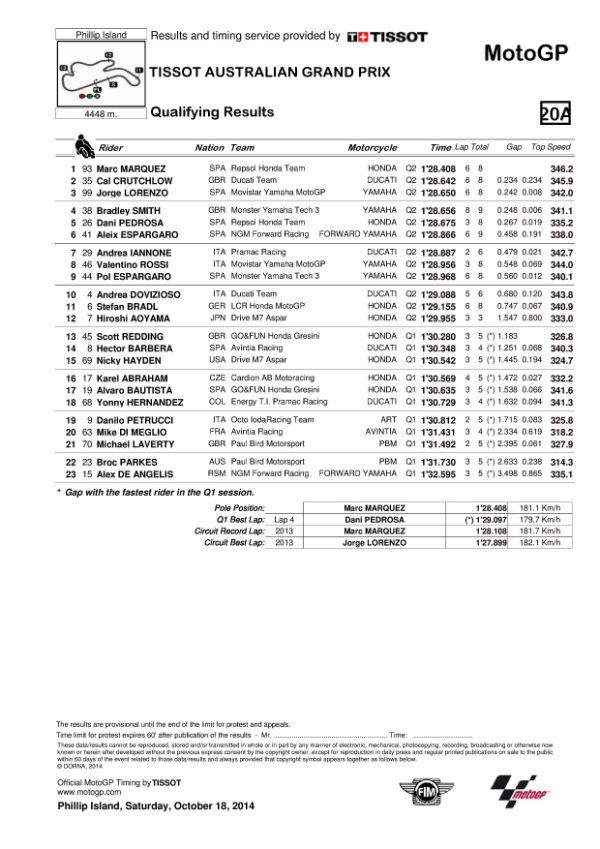