Marc Marquez has equalled yet another record in the premiere class, by taking his twelth win of the season to match Mick Doohan as the most successful rider in a single season. The 21 year old won easily, coming through from a bad start to initially battle with Valentino Rossi before clearing off to win by two and a half seconds.

Rossi had battled for the lead early in the race with teammate Jorge Lorenzo, but first Lorenzo and then Rossi had been forced off Marquez’s pace as tyre wear came into play.

Stefan Bradl took fourth, only just holding off a late charge and a last corner attempt from Bradley Smith, while his injured teammate Pol Espargaro, uncertain yesterday to even make the race start, was sixth.

Cal Crutchlow and Andrea Dovizioso both suffered misfortune, with Crutchlow retiring from sixth on the fifth lap after a wire broke on his factory Ducati, while Dovizioso suffered problems of his own and was forced to relinquish places, eventually finishing eighth, just behind the privateer Ducati of Yonny Hernandez.

It was also a shocker of a race for Dani Pedrosa, with the pre-race favourite crashing not once but twice, first out of the top four and again out of the points after remounting.

Michael Laverty had his most successful MotoGP finish ever on the PBM Aprilia in twelfth, only two seconds of Aoyama in eleventh, while Scott Redding secured another top ten result. 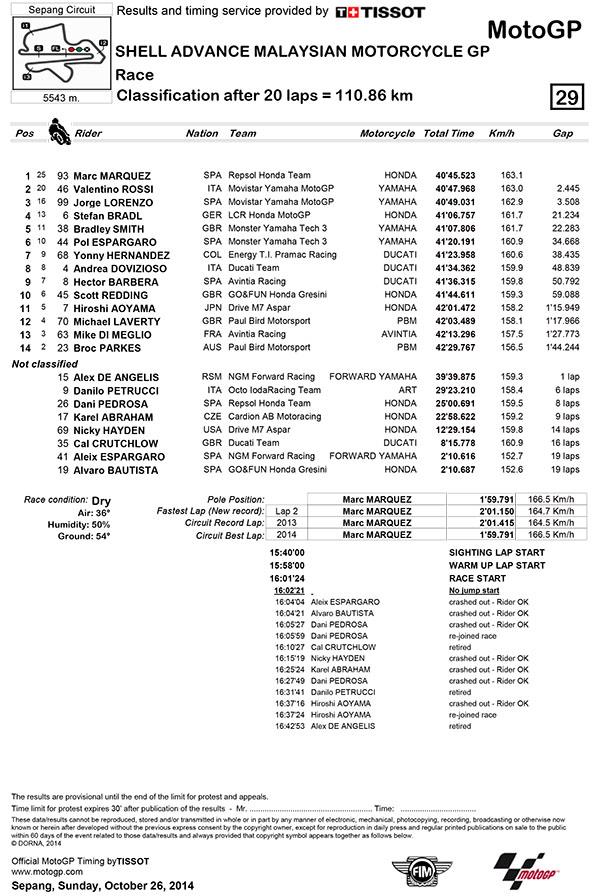