This 800th GP was always going to feel a bit special, and that was before the few spots of rain, concerned technicians and varied tyre choices appearing on the grid for the sighting lap.

With both Hondas on hard rears and the Ducati of Iannone running on a softer, medium compound the fight was taken directly to Pedrosa and Marquez by the Ducati for the first couple of laps. But then disaster struck the Pramac rider. His line was interrupted and as he struggled to regain the handling he was forced out onto the grass. A few bumps and jumps later and he was off into the turf and his bike was left careering along the verge; his race was over.

Meanwhile Lorenzo and Rossi began to eat into the Honda dominance and by lap three it was a Honda, Yamaha, Honda, Yamaha staggered order. But this wasn’t going to last for long.

In what was a fascinating and tight opening series of laps, Valentino misjudged the approach of a tight, right-hander, and was forced to run slightly onto and then beyond the kerb. As he slowed, his bike flipped and he found himself high-siding, eventually laying prone on his back holding his left wrist as his Yamaha M1 span passed him, perilously close.

With two of the main contenders for early speed now back and safe in the medical centre, it was left to Lorenzo to take the battle to the Hondas. By lap seven he was taking small but steady tenths out of both Marquez’s and Pedrosa’s times. And then he pounced.

With fifteen laps to go, Lorenzo - making the most of the agility provided by his softer front and rear tyre choice – made a tight, calculating dive onto the inside of Marquez during a right hand turn and took the lead.

So with a third of the race to come and with a few drops of rain being reported it became the Lorenzo and Marquez show. With twelve laps left on the board, Marquez got fantastic drive out of turn seventeen and into the grid straight and snatched back the lead. The timing of which couldn’t have been more interesting because within minutes the white flags were raised indicating that there was some significant rain on the track and that riders could now choose to swap bikes if they so wished.
Elsewhere on track, Cal Crutchlow was continuing to fight with Bautista and Bradl for Sixth place and Redding – showing a huge improvement from a disappointing qualifying – was riding just behind Bradley Smith in eleventh.

Lorenzo meanwhile was refusing to give up. With the rain not seeming enough to stop the aggressive racing of the leaders, the Yamaha of Lorenzo took back the lead twice before relinquishing it again almost immediately and being reduced to third within the space of two corners as the Hondas of Pedrosa and Marquez shot through.

Fingernails in the Honda garage would have been taking a battering for the final seven laps, as Pedrosa and Marquez switched places for the lead several times.
And then - with six laps to go - the first of the bike swaps began. Further down the rankings, Aleix Espargaro and Nicky Hayden made their swaps, but it was a harder decision for the Honda riders. With five laps to go, would they lose the time taken for a bike swap, or would they risk Lorenzo blinking first, swapping his bike and then catching them as they lost time riding in the rain?

With just four laps to go, Lorenzo made the switch to a more suitably set-up bike and within seconds Pedrosa was ruing the decision to stay out. A cautious ride down the straight into the left-hander found him braking, losing grip and being thrust over the bike and into the asphalt. His race was effectively over and the only question remaining now was simply one of Marquez’s ability to nurse his bike – and the tyres – home?

That was answered pretty quickly. Marquez slipped awkwardly in the wet and was now – also - down. By the time he had managed to pick up his bike and get back on track, he was left in eighth with Lorenzo – now on a new bike – leading for the final three laps.

So, with both factory Hondas limping home and Lorenzo leading, it was left to the open class NGM Yamaha of Aleix Espargaro in second and Cal Crutchlow – on the only Ducati to not have received upgrades this weekend  – to complete the podium.

A compelling and fascinating race left plenty of opportunity for opinion and comment, ‘We got lucky with the conditions but I don’t really care!’ joked a visibly happy Crutchlow, ‘We’ll get a good bonus tonight that’s for sure! A great job by Ducati and they haven’t given up on me and I haven’t given up on them’.

Livio Suppo, Honda team principal seemed contemplative when asked about his teams choice to delay swapping their bikes, ‘My opinion is that it’s always the rider who needs to make the final decision. Everything happened at the end – with three laps to do is there a need to come back? It’s freaky conditions and it can only be the riders’ choice’.

But this day was Lorenzo's. It was his first Aragon win - and Yamaha's - and he looked ecstatic as he stood high on his bike, cheering with his team.

'A lot of emotions but it's unbelievable' he said, speaking immediately after the podium', 'I played poker going into the pits when I did and then suddenly I saw myself in first. Unbelievable.' 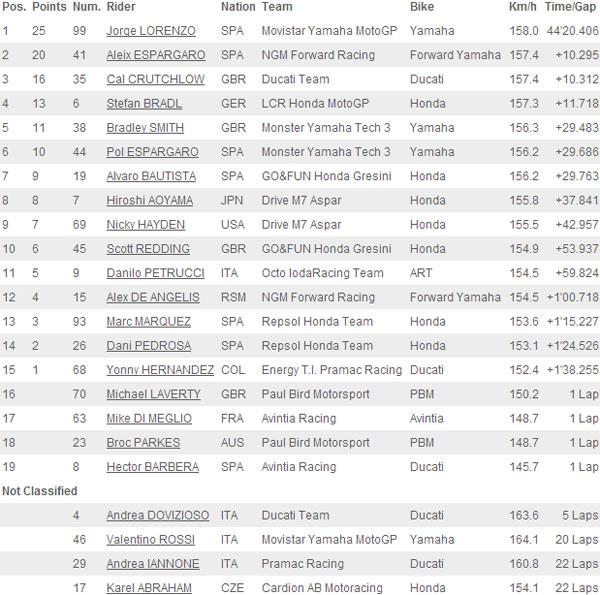