McGuinness and Dunlop: The Double Act

A touring NW200 promotion provided the first opportunity to see how the McGuinness-Dunlop relationship might work in the new TT Legends team – revealingly, and hilariously.

When Honda launched their world endurance and road race team in 2011 it was built around a legend. With 15 TT wins John McGuinness was already the second most successful TT racer of all-time, allowing Honda to name their new squad Honda TT Legends. Since then the 40-year-old Morecambe man has added four more wins to his TT tally to underpin his status as the greatest road racer on the planet.

After a decade of dominance on the Island he is at the pinnacle of his powers, having seen off the superbike challenges of rivals like Bruce Anstey, Cameron Donald and Guy Martin.

Following his worst ever year in 2010, when he admitted he was considering quitting after Ian Hutchinson won all five solo races and John failed to get on the podium for the first time since his debut in 1996, the Morecambe Missile blasted back with two doubles in the last two years. 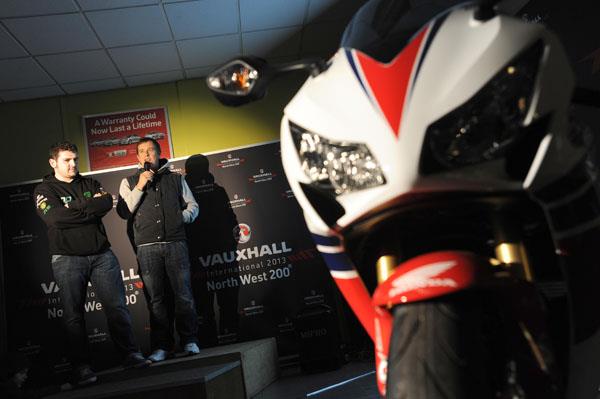 John has admitted that he now has his sights set on Joey Dunlop’s all-time record of 26 TT wins and with 19 wins at 40 compared to Joey’s 14 at the same age, time would appear to be on his side. With what is generally recognised as the best bike beneath him -the Honda Fireblade - and the most experienced TT squad in support, everything seems to be set fair for his continued supremacy.

Or at least that may be how things appear to be on paper. But no one knows better than John McGuinness that he can never, ever rest on his TT laurels. With Conor Cummins fully recovered from his Senior TT crash in 2010 and joining William Dunlop in the Milwaukee Yamaha squad for 2013 the ‘Young Guns’ are biting at John’s heels.

Guy Martin will be seeking to end his - and Tyco Suzuki’s - TT famine and Cameron Donald still appears to feel he has unfinished business on the Wilson Craig Hondas. But perhaps the greatest threat to the McGuinness TT dream will come from within his own team. The drafting of three-time TT winner Michael Dunlop into the Honda Legends squad to race the North West 200 and the TT in 2013 places the sport’s most promising star on equal machinery with the legend.

In a scenario that is reminiscent of the great battles between the elder Joey Dunlop and the youthful Phillip McCallen on the Irish roads or between Joey and David Jefferies at the TT more than a decade ago.

And given that McGuinness and Dunlop are team-mates how will it all play out in the garage and on the race track? Will the King demand that the Young Pretender be kept in his subservient place or will the Angry Young Man reject reputations and seek his own days of superbike glory?

Unsurprisingly, it was John who initially held centre stage as the duo engaged with hundreds of fans. But gradually Michael emerged from his shell to join in the banter with his teammate. 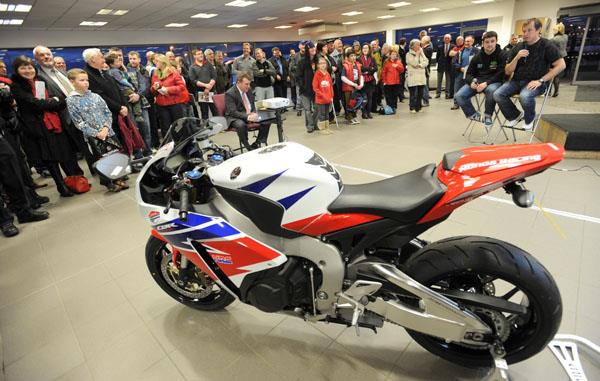 Slightly incongruously, given that this was a North West 200 gig, the pair were asked to talk through a 130mph plus onboard lap by John from the 2010 Senior TT and it provided a wonderful opportunity for interaction between them. (Michael laughed off the TT connection by wittily asking “What were we going to say about a North West lap anyway - we get to Mill Row and then its flat out for miles, we get to Mathers and then its flat out for miles.”)

‘I’ve never seen this before.’ John explained, before teasing out the finer points of his blistering lap. ‘Listen to the throttle, you have to roll off at Crosby nowadays, you cant take it flat out in top any more, the bikes are too fast.’ he said as the footage captured him running right up against the kerb on the exit.

‘Can you hear that?’ he asks. ‘We’re on the side of the tyre here at the little kink before the end of the Sulby straight and the bike it is hitting the rev limiter flat out in top’ he laughs.
He points out a small mistake on the entry to the 26th that forces him wide on the exit and he highlights the wheelspin at the exit of every slowish corner, encouraging everyone to attune their ears to it at places like Bedstead.

His knowledge is complete and precise, he exudes total confidence in what he is doing and where he is going on the course.

Michael is less sure-footed. He hasn’t seen the filmed lap before either and his expressions belie his obvious appreciation of John’s smoothness and speed. At times it looks like he’s in awe and at one point he actually asks John if he isn’t worried that by letting his lap be filmed like this he isn’t giving too much away about how he rides the TT.

He isn’t sure of the corner names and at times the 23 year old seems slightly unsure of where exactly he is on the track. 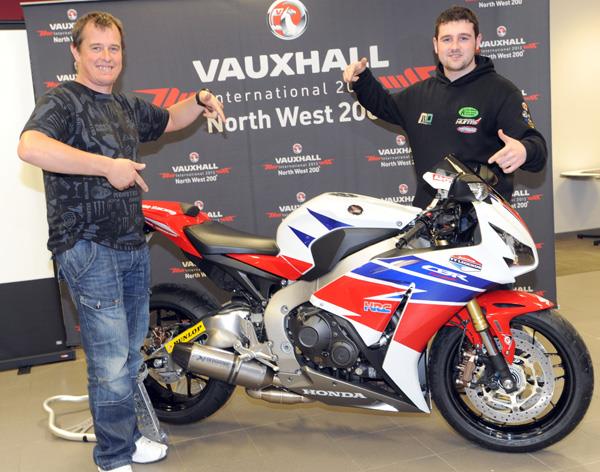 ‘If you know where you are going you stay in the middle of the road and on the bits that you don’t know, you just hit every kerb that you can’ is his rough and ready approach to the Ginger Hall to Ramsey section, which he describes as ‘Suicide Alley’.

But Michael Dunlop is also a member of the 130mph plus TT club and McGuinness is not fooled by the banter.

‘If you listen to Michael carefully it’s like “Mini Me”, he is in the same gear, rolling the throttle, using the same braking markers as I do in most places’ he points out afterwards.
By day two they are getting on famously - like Morecambe and Wise one man says- and it is obvious that there is a real rapport between them.

They share the same devil-may-care attitude to life, the same irreverent and easy going approach. Someone asks if there is any possibility of team orders and Michael drily responds by saying that ‘We aren’t allowed to go large at McDonald’s.’ John wonders out loud how they would receive the team orders if there were any.

‘Would they give us radios?’ he ponders.’ ‘Imagine going into the Verandah and hearing in your ear “Hello John, it’s Neil here, Neil Tuxworth.”’

But John does reveal that he is considering utilising some new technology to help his pit board lay out at the TT.

‘With live timing, transponders and sector splits the way the TT lap is timed is completely different now and you can’t really hide anything.’ he explains. ‘But if my guys had a laptop and a dongle we could use the live timing and reposition some of the pit boards so that I would get more precise information earlier in a lap and at more places than we have now.’
Another man asks if they will trade information as team mates?

‘I know that John will offer me advice and guide me and he won’t tell me any lies.’ Michael says with conviction. ‘I will take it all in and be very grateful.’
‘And then I will tell him nothing but lies back’ he joked.

The pair of them laugh like hyenas as John recalls the ‘Battle of the Bulge’ that was waged against him by the Honda management in 2007. 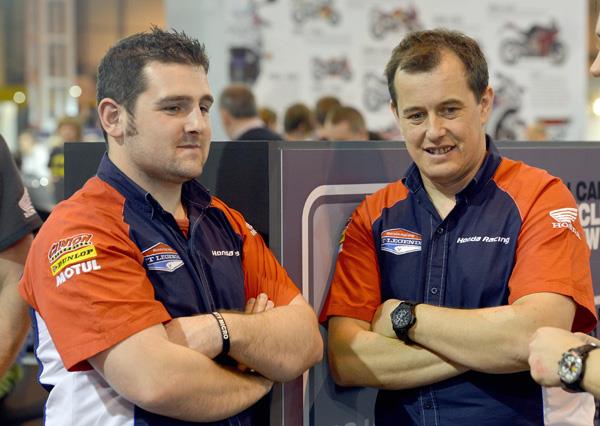 It is worth pointing out that John won both the Superbike and the Senior races in 2007 and was the first man through the 130mph barrier in Centenary year but he admits that he is still getting grief about his weight from the top brass.

Training and the gym is a touchy subject for both John and Michael and when they are asked what they do to get fit they both pretend that they misheard it as ‘fat’. John says that the gym ‘depresses him’ and that he would ‘rather lick his father’s toenails’ than workout.

They are hilarious when they explain that they understand that the team work late into the night fitting superlight components and grinding parts to save weight whilst they feel guilty for at being down the chip shop!

But it is obvious that signing a Honda contract has galvanised Michael into action. He has been training twice a day and has lost two stone over the Christmas period. They may both profess to believe that ‘It’s not how fit you are, its how fast you are.’ but there are already signs in the Dunlop camp of just how seriously Michael is taking his Honda opportunity.

Inevitably in Ireland the question arises about John chasing Joey’s TT wins record. He responds that it might be better if he just equalled the record so that he might be allowed back into the Emerald Isle again but he admits that he is still ‘miles away’ and points out that seven wins are ‘a whole TT career.’

As always, John is highly complimentary about his hero. Michael agrees that Joey ‘was the man to look up to in his day’ but he says that John is the man that ‘I look up to now’.

In 2008 Michael lost his father Robert when he was just 18 years old. John McGuinness is almost twice Michael’s age and he has already achieved everything that Michael wants to achieve. On a personal level it is obvious that they get on like a house on fire so there should be no surprise that there is a complete and total respect. As Michael says ‘You only have to look at what John has done, that says it all.’

For John the question is slightly different. How worried is he about Michael Dunlop?

‘I am not 1% worried about Michael, that’s not how it works.’ he says. ‘Michael could come to the TT and clear off, win both superbike races, break the lap record and blow us all into the weeds. That will happen some day, I cannot win forever. I know that and there is no point in worrying about it. We will just have to wait and see what happens.’