Guy Martin has taken a close victory in the Solo Championship race of the Southern 100, winning the highlight of the week’s racing to retain his title in a close fought battle with four-time winner Dean Harrison

Harrison was an early leader, but Martin was able to close him down, both riders breaking the lap record in the process. But backmarkers played a part in deciding the top step, with Martin, now a three-time winner of the Championship race, taking the right line through and breaking away to win.

Martin said after the race “The backmarkers were the making or breaking of the race, and I got lucky and made it though. They were coming thick and fast, and it was just a chase of making the most of every move past them. I just kept the wires tight, and knuckled down. Dean’s bike was better in some places than mine, but only in some places, and it was a reet proper compromise!”

Harrison added: “The bike was faultless all race, and I got a break at the front until I saw on the pit board that Guy was behind me. I hesitated a bit through the backmaerkers and lost out, but I took the lap record too so I’m not complaining!”

Harrison has had a week not to complain about, though, taking an incredible five victories since racing started on Tuesday on the Martrain Yamaha and RC Express Kawasakis, dominating the superbike, supersport and Supertwin class.

Michael Dunlop, an early front runner in the Solo Championship race, was forced to retire with mechanical problems on the Hawk Racing BMW, having taken third in the opening superbike race of the week behind Harrison and Martin. 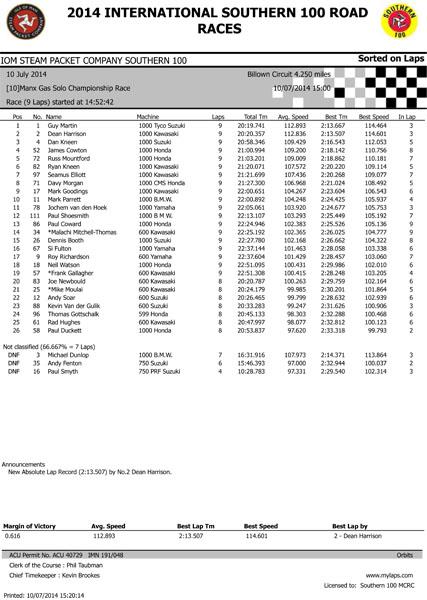