WSB Imola: Rea goes back to back with race one win

Jonathan Rea has taken back to back wins in World Superbike, taking the first win at Imola to double up his victory last time out in Assen and heading up an all-British podium of Chaz Davies and Tom Sykes.

Rea said after the race: “It’s sure not easy to win, but I’m lucky my team gave me a good bike. We struggled at the end, with the soft tyre struggling with the track not quite being hot enough for it, but it’s nice to back up the wet win with a dry one here too.”

Rea, on pole, led from the line to control the entire race and eventually win by five seconds, but the battle for second wasn’t as clear cut, as a battle between Davies, Sykes, Loris Baz, Sylvain Guintoli and Marco Melandri saw the Welshman eventually break the tail and escape, finishing two seconds clear.

Davies said: “I’m over the moon, especially to be on the podium 20 minutes down the the road from where my Ducati was born. It was a difficult race, with Jonathan’s pace at the front, but I was able to get some good laps in after a bad mid-race and break the boys ahead.”

Sykes was able to find the better of the two Frenchmen, while Baz picked off his countryman on the last lap and an error ran Melandri wide and out of the fight.

Eugene Laverty was seventh, finishing one place ahead of where he qualified after front row qualifier Davide Guigliano crashed out in front of him, with his Voltcom Crescent Suzuki teammate Alex Lowes in eighth behind him.

Leon Haslam was tenth, to make six British riders in the top ten, while Leon Camier was the first Evo bike home in eleventh. Christian Iddon was twelfth after a race-long battle with the other Evo front runners, but was removed from the results as his Bimota remains un-homologated.

Camier said afterwards that the conditions had affected his consistency, saying: “It’s hard to do a whole race by yourself, especially somewhere so physical. The wind changed the nature of the track a lot today, too, and I was able to brake 10m later in some places and having to brake 15m earlier in others!” 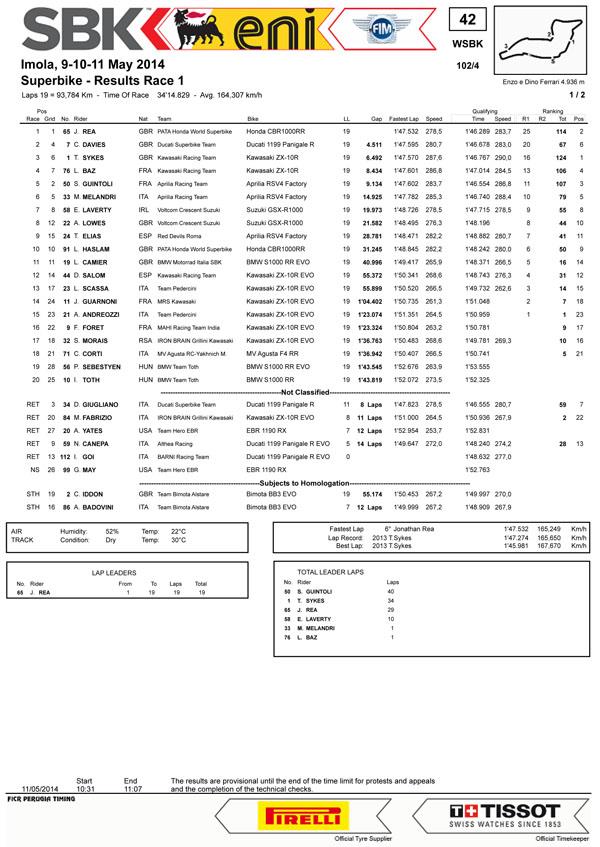