WSB Imola: Rea makes it two from two as he dominates in Italy

An imperious Jonathan Rea has taken a double victory at Imola by dominating race two, to complete a fairytale weekend for the Pata Honda, taking the championship lead in the process.

Similar to race one, Rea led flag to flag, with none of his rivals able to match the pace of the Northern Irishman as he took the race win by four seconds from Chaz Davies.

Speaking after, Rea said: “It’s been a great weekend. I knew after race one we had good pace, but it’s hard to get too excited when you know you’ve still got a job to do. Moving on now to Donington, my home circuit and somewhere I really enjoy, so hopefully we can go well there.”

Davies, coming through strong again to take his second podium of the weekend, was able to find late pace in order to demote Sylvain Guintoli to third, after a battle in the closing stages with Loris Baz, Tom Sykes and Guintoli. Baz was able to pass teammate Sykes on the last lap for fourth.

Davies said after the race: “That was a great day! I had to work a bit harder for that, and I was a bit more on the limit for it. We changed the bike between races, and it made some places a little easier but a lot harder in others, so I’m pleased with the day, especially so close to the Ducati factory!”

Davide Guigliano faded despite his front row start to finish sixth, ahead of Tony Elias and Leon Haslam, who were able to close and pass Eugene Laverty, despite a bad grid position for Elias and a moment in the gravel for Haslam.

Alex Lowes was tenth, closing down and passing Marco Melandri twice in the race after running into the gravel, with eleventh a disaster for the former world champion. Leon Camier was again the first Evo bike in twelfth.

Camier said: “I had an unbelievable race! We made a few changes for race two,and it make a big difference, but then someone made a mistake off the line and I lost maybe twelve seconds. But we were able to pull it together, make progress, and by the end of the race we were lapping at times similar to some of the proper superbike guys.” 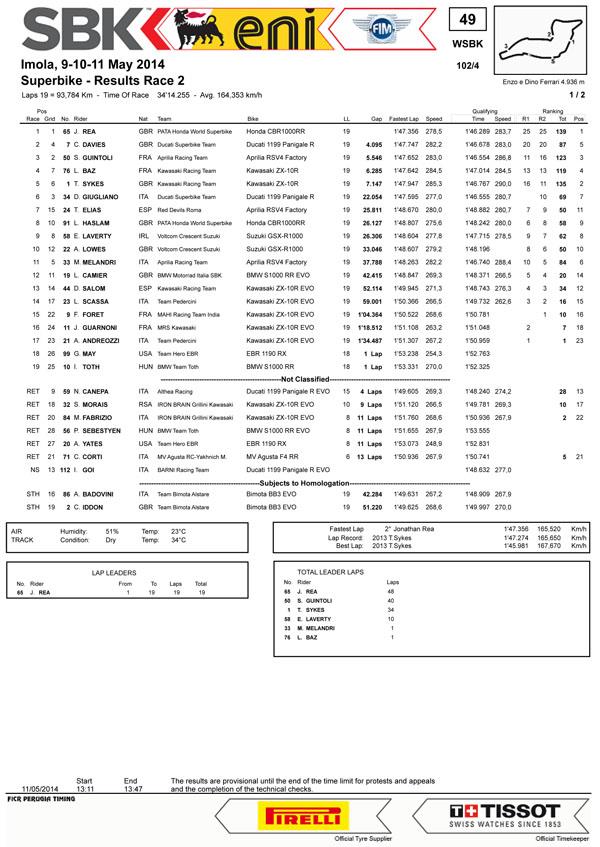