The reigning champion started race two as in race one, back on the third row of the grid in eleventh, but a better start than race one meant he was able to move his way through the field with ease before passing the leaders to set his own pace as he cleared off.

“In race one I ws almost starting to panic, but I enjoyed the way race two developed. We got a smack in the face at Imola, but I can’t complain, as the Kawasaki really worked, and we didn’t change anything between the races. The sun’s come out too, and there’s nothing like Donington in the sun!”

He eventually finished the race 3.5 second ahead of his teammate Loris Baz, who takes second again to complete a great day for the dup, while Sylvain Guintoli was third, making up for his lack of pace in race one.

Baz said after the race: “The race was much faster than in race one, and I don’t know what Tom had to eat between the races. I was losing tenths of a second in some corners, and although I knew I could catch him in the first section of the track I was having to take too many chances to be safe.”

The Ducati pair of Davide Guigliano and Chaz Davies were fourth and fifth, while Jonathan Rea and Leon Haslam were sixth and seventh on the Pata Hondas.

It was a disastrous race for the Voltcom Crescent Suzuki team, however, with Alex Lowes recovering from a crash that also took out Marco Melandri to finish ninth, while teammate Eugene Laverty was also forced to remount after falling to finish thirteenth. Melandri failed to score points in seventeenth. 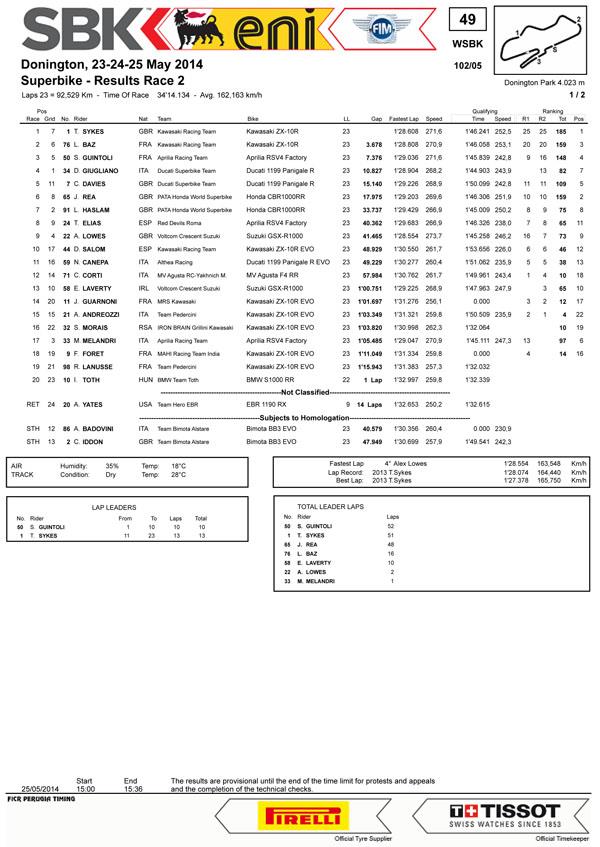