Dutchman Michael van der Mark has extended his lead at the front of the World Supersport championship with a last lap victory at Donington Park, after a race long battle with the MV Agusta of Jules Cluzel.

Former champion Kenan Sofuoglu was an early leader, with Kev Coghlan chasing him down, but a mistake from the Scotsman allowed Lorenzo Zanetti to squeeze through, swapping the second place with Zanetti, Cluzel, and PJ Jacobsen.

However, mechanical dramas soon struck the Turk, with smoke coming from his machine forcing him into the pits. Later diagnosed as a broken fairing bracket causing the plastics to rub the back wheel, it means three consecutive problems for him and severely limits his championship goals as it dropped him to fourth.

Zanetti was the next to fall to technical problems, with a big engine blow-up dropping him out of second, allowing his teammate van der Mark through to chase down Coghlan. An aggressive move allowed him through, with Cluzel following for second.

Florian Marino was fifth, ahead of Jacobsen and Dubliner Jack Kennedy. 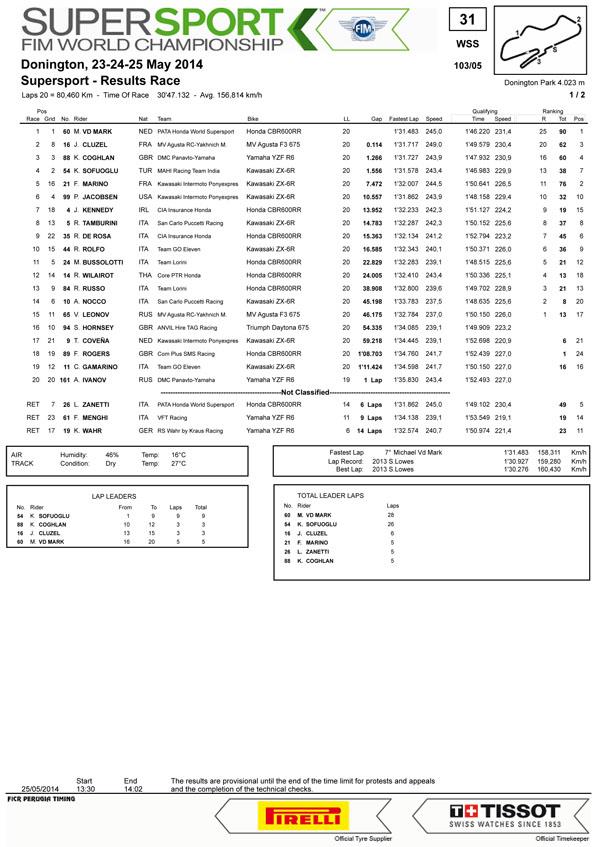