The Piaggio X10 is not dirt cheap: the £5,000 you need to score one will seem like a lot to plenty of bike riders, who inevitably consider what motorcycle they could get for that money, but against most rival scooters it looks pretty good. It also happens to be the best scooter in its class.

The only version of the X10 coming to scooter-resistant Britain is the 350 in high spec executive guise, though much of Europe gets a 125 and 500 too, in two spec levels.

No problem, the 350 is the best and aside from top speed, as quick as the 500 anyway. This is due to being a lot lighter, with a brand new engine that offers plenty of torque as well as exceptional economy, according to Piaggio.

Judging by the Beverly 350, in which this engine made its debut a few months ago, the X10 should be capable of at least 70mpg in everyday riding.

It’s comfortable enough. The seat is quite low at 29.9in (760mm) and there’s plenty of room for your legs and feet, and the central seat hump can be mounted forward or back according to taste (and leg length).

It’s spacious for a passenger too, and the engine copes well enough with the extra weight, while there’s a generous 52 litres of space beneath the seat. 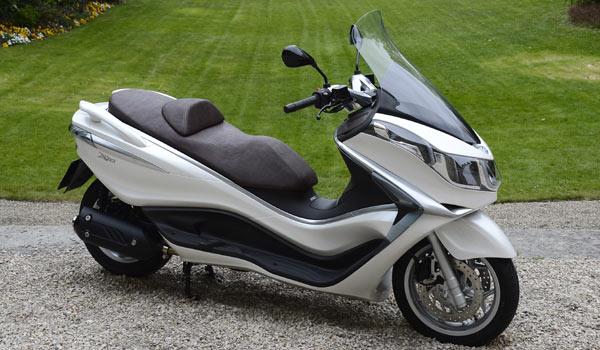 When you open the throttle the power take up is very smooth if a little soft just off the line, and the engine then has a very pleasing, liquid power delivery that’s key to the sophisticated feel of this scooter.

ABS brakes are standard and so is a basic traction control system, although I’ve never felt the need for this even on the fastest super scooters, though it might be useful for Italians riding on wet Roman cobbles. But they’re probably used to that by now anyway.

The only fly in the ointment is Kymco’s excellent Downtown 300i, which looks good and although it makes slightly less power is a full 30kg (66lb) lighter and feels just as lively.

It has less storage space and equipment levels are lower – notably it lacks ABS on UK versions – but it does cost £1,000 less.

Yamaha’s Majesty 400 on the other hand is a hefty £6,400, making the better equipped Piaggio look a real bargain.