New for old: Kawasaki give their Z650 the retro RS treatment

Kawasaki have expanded their retro naked model range to include the A2-friendly Z650RS. Clearly targeted at younger riders, the Z650RS is to the Z900RS as the Z650-B1 was to the Z1 back in the 1970s glory days.

As it’s aimed at new riders as well as experienced folk, an A2 kit that drops peak power to 47bhp will be available from dealers.

Also carried over from the Z650 is a tubular steel trellis frame that weighs just 13.5kg – although thankfully Kawasaki haven’t carried over the green paint.

The frame has been specially designed to be skinny in the middle to make it easier for riders to get their feet down, on top of a low seat height of just 820mm.

Perched atop the frame is a 12 litre tank (a little small if you ask us) although that does contribute to a kerb weight of 187kg.

Also coming across from the Z650 are the suspension and brakes. A set of conventional non-adjustable 41mm forks take care of things up front, while a horizontally mounted monoshock (adjustable for preload only) deals with bumps at the back.

Braking duties are looked after by a pair of twin piston calipers on 300mm discs along with a single piston on a 20mm disc at the rear, both of which are assisted by Bosch ABS.

The big changes to the RS compared to the Z650 come in the styling department. Gone is the modern upswept tail and pointy headlight, in favour of a ‘duck tail’ cowling and single round lamp.

The wheels too are new designed to resemble classic spoked units, while the wavy discs from the Z650 have been chucked in favour of something more classic. There’s also a thoroughly retro pair of analogue clocks, with a little digital centre panel for extra info.

Kawasaki have been teasing us for a few weeks with a new model using the stomach-turning phrase the ‘Retrovolution is coming’ on their social media channels.

It’s expected the bike will be a Z650RS, with Kawasaki adding a retro twist to the budget twin, and the latest video clip gives us the biggest hint yet with a classic Z650 making an appearance in the background of a chess match.

If the new model looks half as good as the larger capacity Z900RS first released in 2017, it would offer a chic retro option for those looking for a little less power or riding on an A2 licence. 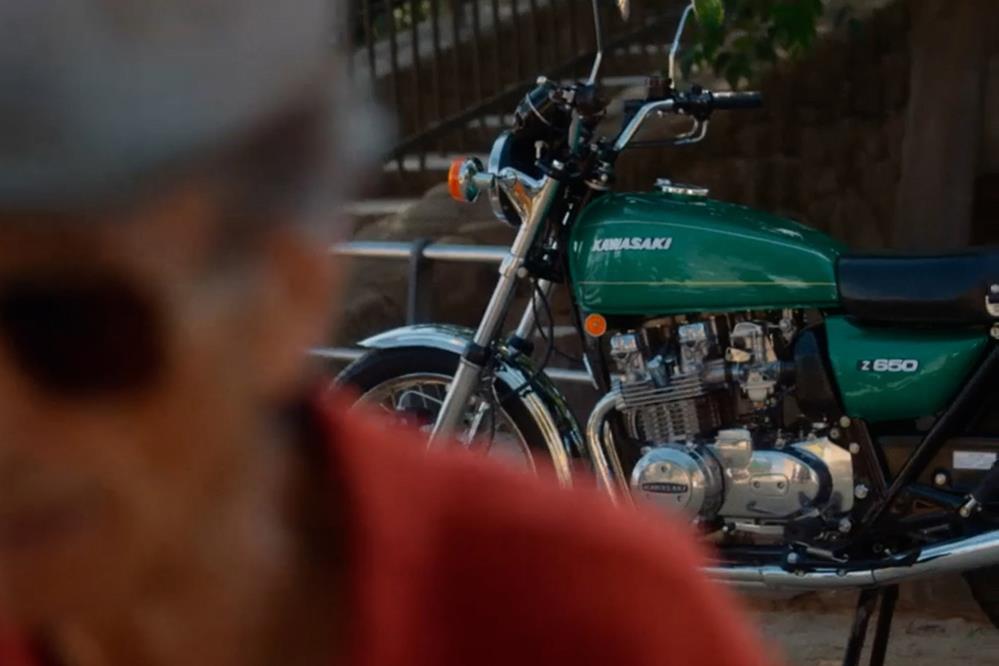 The inline four engine used in the Z900RS gives it a point of difference over the predominantly twin and triple cylinder competition such as the BMW R nine T, Triumph Thruxton RS or Yamaha XSR900.

But assuming a new Z650RS uses the 67bhp parallel-twin used in the standard Z650 it’ll sit right in the crosshairs of the excellent Triumph Street Twin and the admittedly less powerful Royal Enfield Interceptor 650.

MCN will bring you all the latest news from Kawasaki as soon as we get it.

A side view of the Kawasaki Z650RS

A rear view of the Kawasaki Z650RS

Parked up on the Kawasaki Z650RS

The Kawasaki Z650RS gets styling similar to the Z900RS