All the fun of the fairing: Triumph Speed Triple 1200 RR unveiled

Triumph are no strangers to building thoroughly modern bikes that draw on styling inspiration from yesteryear and that’s exactly what they’ve done with this new Speed Triple 1200 RR.

The half-faired café racer-style sportsbike is based on the Speed Triple 1200 RS released earlier this year. Like the RS super naked, the RR uses a 178bhp 1160cc triple engine, wrapped in an aluminium twin-spar frame.

But where the RS has the usual bug-eye twin headlamps, the RR gains a slick-looking top fairing with a single round headlamp.

The new Speed Triple RR doesn’t quite have a North Circular-busting bullet fairing, but instead uses a more angular and modern design that still gives a clear nod to the ‘ton-up boys’.

To go along with the new fairing, the flat bars of the RS make way for clip-ons that sit below the top yoke for a more canted-forward and aggressive riding position, while the footpegs have also been moved slightly further back.

The RR uses the same Brembo Stylema brake calipers and 320mm discs as the RS and the same lean-sensitive ABS with combined braking, but the adjustable Öhlins on the naked version is swapped for electronic semi-active units on the faired bike.

This also means that the suspension settings change depending on the riding mode selected and should mean a softer and more forgiving ride when you want it on the road – something the rock-solid Speed Triple RS could have done with.

The six-axis IMU that controls the ABS also feeds into the traction and wheelie control which have various levels of intervention to choose from depending on where you are and how you want to ride. Pirelli Supercorsa SP V3 tyres replace the RS’s Metzeler Racetec RR K3 rubber.

Despite the fact Triumph gave us the name of this model when they teased it back in August, the internet was immediately awash with sportsbike fans dreaming of a new, big-capacity Daytona.

But Triumph have made it clear that this new RR is first and foremost a road bike, unlike Daytona models which are always developed with the track in mind.

The RR gets the same 5in full-colour TFT dash and backlit switchgear as the RS as well as  keyless ignition, cruise control and self-cancelling indicators. The Rain, Road, Sport and Track riding modes are all controllable through the dash menu and there’s a customisable Rider option, too.

That may sound steep compared to the £15,100 RS, but when you consider that MV Agusta’s Superveloce costs around the same despite being significantly down on power and using manually adjustable Marzocchi forks and a Sachs shock, the classy Öhlins-kitted Triumph should tempt many riders.

Triumph have lit a fire in the belly of performance bike fans across Britain – teasing a new faired Speed Triple 1200 RR design concept that could signal the firm’s return to superbike production.

Revealed out of the blue on social media and in a 48 second YouTube teaser trailer (above), details remain scarce at this time, however it’s possible to make out a few snippets in the darkened silhouette.

Called the Speed Triple 1200 RR, the machine appears to be based on the pre-existing Speed Triple 1200 RS super naked – itself launched for 2021 featuring a 178bhp, liquid-cooled 1160cc three-cylinder engine, a lighter aluminium chassis, plus semi-active Öhlins suspension.

Praised at its Donington Park launch for its 'genuine superbike performance' by Chief Road Tester Michael Neeves, it now looks as if Triumph have gone the whole hog and produced a faired version, with more details set to be revealed soon. 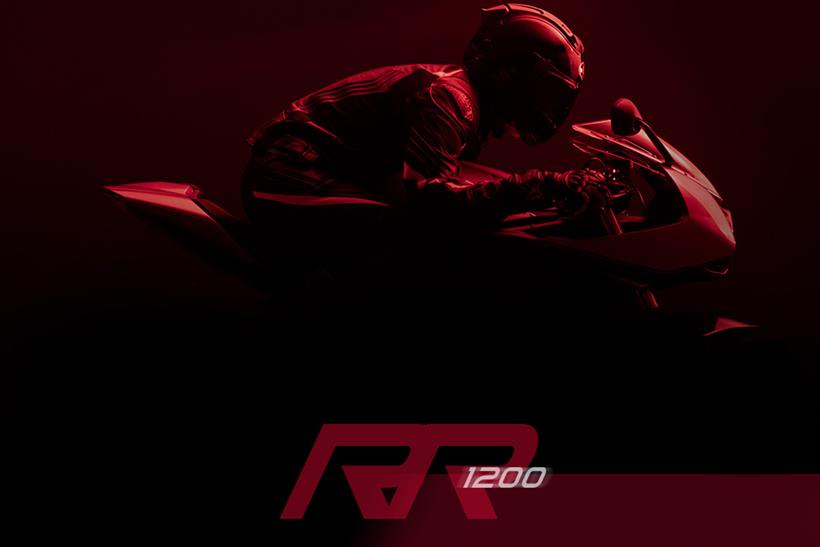 But what about what we can see already? Starting at the rear, the stubby tail section appears to be taken directly from the naked Speed. Although the pillion perch is covered, passenger pegs are clearly still present.

The chassis also appears to be taken from the current Speed Triple, with carbon fibre accents below the petrol tank and a stitched design on the riders’ seat for a little extra panache.

Moving forward, we find a front fairing, which shrouds the seemingly electronically adjustable front forks and a TFT screen. Although the rider sports a crouch in the photos, the bars don’t appear to be too extreme – implying this would be more of a road focussed sports machine, rather than an all-out trackday brawler.

Then there’s the screen itself, which sports a retro single headlight upfront – similar to that of the MV Agusta Superveloce 800 and hotly anticipated Bimota KB4.

Whether this will lead to a lower fairing remains to be seen, but will become clearer as more of the bike is revealed. And with the image URLs on Triumph's website labelled as 'my22' and the words 'coming soon' written in large font, it looks as if we won't have to wait too long.