Need distracting from a hangover? Got some DIY you should be getting on with? Then settle down and attempt MCN’s fiendishly addictive Christmas quiz.

Get the highest score in the quiz and you'll win a heap of top quality riding kit...

Just jot down your answers for part one on this answer sheet (also available in the 21 December issue). Part two of the quiz and the corresponding answer sheet is in today's paper (28 December). Once you've filled out both answer sheets, send them with your name and contact number to: MCN Christmas Quiz, MCN, Bauer Media, Lynch Wood, Peterborough, PE2 6EA. Closing date for entries is January 9, 2012.

1. The Honda NC700 engine is based on which car engine?

3 Which bike is this, unsuccessfully attempting a backflip earlier this year?
a) Harley-Davidson Road King
b) Yamaha VMAX
c) Ducati Diavel

4. Which motorcycle factory celebrated its 20th anniversary in 2011?
a) Aprilia
b) Triumph
c) Victory

6. In 2011 Ducati agreed marketing links with which car brand?
a) AMG
b) Dacia
c) Alfa Romeo

7. What bike is the recipient of this getting for Christmas?
a) BMW R1200GS
b) Kawasaki Versys 1000
c) Ducati Multistrada

12. What quickly detaches on the Harley Dyna Switchback?
a) The wheels
b) The chrome
c) The screen

14. What name did Triumph originally call its Tiger Explorer 1200 before it was released?
a) Hurricane
b) Adventurer
c) Traveller

17. What caused this?
a) A rutting deer
b) Termites
c) A Yamaha V-Max trying to keep up with a Ducati Diavel

18. What is odd about this Nembo prototype?
a) It uses a rotary engine
b) Its engine is upsidedown
c) It uses only aeroplane components

19. What is this gentleman building?
a) A Norton Commando 961
b) A Triumph Tiger Explorer
c) A Metisse Desert Racer

22. From 1971, Triumph Bonnevilles stored their oil where?
a) The frame
b) A tank behind the engine
c) A tray beneath the bike

24. Matchless motorcycles were often rebadged versions of which other brand?
a) Ariel
b) AJS
c) Royal Enfield

25. Which car design company styled the BSA Rocket 3, famous for its raygun silencers and general ugliness?
a) Pininfarina
b) Michelotti
c) Ogle

26. The 1969 Benelli Tornado used an engine from which manufacturer?
a) Honda
b) Triumph
c) Ducati

27. Why did FireBlade change to Fireblade in 2006?
a) A new marketing agency decided the capital B was too 1990s
b) Tadao Baba left the design team and it was done as a mark of respect
c) It was a brochure misprint which stuck

28. Triumph's famous Bonneville model is named after…
a) A charming French town
b) Its designer
c) Salt flats in Utah

29. The legendary Triumph Trident race bike was dubbed Slippery…
a) Sausage
b) Sam
c) When wet

31. What bike is this from?
a) Moto Guzzi V7 Sport
b) Kawasaki ER-6n
c) Ducati Panigale

33. What is valve overlap?
a) When you overdo grinding-in the valve seats
b) When the valves float and one hits the other
c) The period when exhaust and inlet valves are open together

34. On which bike would you feel a torque reaction when you blip the throttle?
a) Harley-Davidson Road King
b) Moto Guzzi Stelvio
c) BMW K1300S

37. Which current road racer rides with this metalwork in his spine?
a) Conor Cummins
b) Cameron Donald
c) John McGuinness

38. Who got onto primetime BBC driving a barge?
a) Jorge Lorenzo
b) Guy Martin
c) Giacomo Agostini

39. This is Maxime Berger struggling with rear grip. What’s the track?
a) Donington Park
b) Silverstone
c) Darley Moor 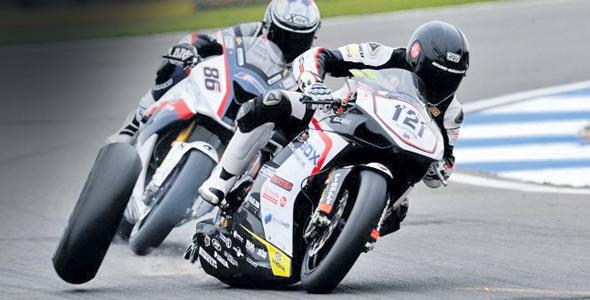 40. A flying Dunlop. But which one?
a) Michael
b) William
c) Herbert