Over the next few weeks, the IAM will be providing you with advice to be a better rider.

Whether you’ve just started riding or you’ve been away from your bike for a few years, you might be under the impression that you can get on no trouble. But knowing how to ride well will make sure you get the most out of your motorcycle.

Riding on the motorway requires different skills to riding on rural roads or residential roads. You need to plan your route, anticipate traffic and be observant, checking speeds and distances – even more so than normal. Doing this will mean you have a smooth and progressive journey.

• The key to motorway safety is concentrating and staying alert and observant. That’s easier said than done because there’s often little to do in terms of steering, braking or gear changing.

• Plan a route, anticipate traffic movement and be ultra-observant while constantly checking speeds and distances in front and behind you. Ride safely, smoothly and progressively at all times. Stay in the left-hand lane when appropriate, but avoid constantly diving in and out of it.

• Drivers often display poor lane discipline that causes frustration. If you come up behind an inconsiderate driver sat in the middle lane when not actually overtaking, resist the temptation to flash your lights or sound the horn. Just overtake as safely and as soon as you can.

• At 70mph on a dry motorway, it takes an alert rider over 21m to react to a hazard, and at least 75m more to stop. That’s at least 96m between spotting a hazard and stopping. So keep your distance.

• Can you see your lane’s road surface in the distance? If not, consider positioning your bike so that it is offset from the wheels of the vehicle in front or slightly further offset so that you can see the road surface ahead.

• Tailgating is common, but avoid getting wound up by this dangerous driving style – instead let tailgaters by as soon as you can. Consider slowing and moving into the left hand lane to encourage them to pass.

• Many drivers, when following a rider who is using the left side of their particular lane, inadvertently judge their following distance from the car in front of the motorcycle rather than the motorcycle itself. This means they end up travelling far too close for safety. Consider repositioning your machine to the right side of the lane where you are directly in the line of sight of the following driver. If this makes no difference, consider moving over to let that driver past.

• Always brake in a way that doesn’t surprise the vehicle behind you. Usually, that driver won’t be sticking to the two-second rule. To protect yourself, aim to spot hazards early, thereby extending your braking distance and giving the following driver time to react. In urgent situations, consider using the space between lines of traffic not only to further extend your braking distance, but to avoid becoming the 'meat in the sandwich' if the following driver doesn’t react in time.

• As you approach and pass an entrance slip road leading to your carriageway, observe the flow of traffic and consider whether to move into another lane to help the vehicles merge.

• Use your mirrors and ‘Blind Spot Checks’ with care when overtaking on a motorway. Signal early. Change lanes gradually. Never expect or force other drivers to move out of your way. You may need to accelerate, but avoid getting in the way of faster vehicles. Finally, adjust your speed so that it matches the traffic flow. Don’t compromise your safe following distance (or that of the vehicle behind you) when changing lanes. Watch for vehicles aiming to pull into the same space as you from another lane.

• In congested traffic, if your lane is moving faster you may pass traffic on your right. Consider filtering when traffic speeds drop below 10–15mph but don’t use this as an excuse for blatant ‘undertaking’, and avoid lane hopping.

• If you need to stop on the hard shoulder, pull over to the far left side and put your hazard warning lights on. Then get yourself (and your pillion) onto the verge behind the barrier and to the rear of your machine. Stay near your machine or find the nearest emergency phone. The direction is marked by arrows on a marker post and is never more than half-a-mile away. On rejoining the motorway, use the hard shoulder as an acceleration lane to match your speed to the flow of the traffic, but be aware the hard shoulder can harbour all manner of hazards and debris such as tyre carcasses.

If you missed last week’s column, we talked about getting your braking right. 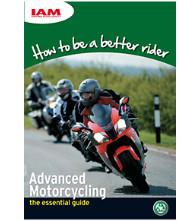 For more riding advice get a copy of How to be a Better Rider, Advanced Motorcycling the Essential Guide. It costs £9.99 and is available from the IAM. Contact www.iam.org.uk