Honda has just unveiled the 2012 Honda CBR1000RR Fireblade, marking 20 years since the first Honda Fireblade arrived on the scene, designed by Tadao Baba.

The 2002-2003 854cc Fireblade was the last of the Tadao Baba designed Fireblades' and also the final CBR900RR Firelade. Later Honda CBR1000RR Fireblades were faster but heavier and less involving.

Like any Honda CBR900RR Fireblade this one is incredibly fast, surprisingly reliable, amazingly comfortable and well built too. A stunning motorcycle that looks extra tasty in white.

The Honda CBR900RR Fireblade's small size and quality chassis makes this a motorcycle you can get on and ride hard from day one. Once you get used to it you can explore its outstanding abilities.

The 954 is fast to turn and will shake its handlebars when accelerating, especially if the front hits bumps.

The Honda CBR900RR Fireblade is pretty comfy for the rider – acceptable for the pillion if a grab rail’s added – that’s impressive for a pure sports motorcycle. Mirrors are pretty good, underseat storage is accessible and handy, HISS imobiliser’s a boon and upgradable.

The odd Fireblade used for racing suffered problems with the engine but motorcycles used on the road are pretty much trouble free. Some engine noise is normal.

The original steering head bearings should have been replaced with a recall but not every owner bothered – if the handling’s bad that might be the problem, especially if the motorcycle is an import. 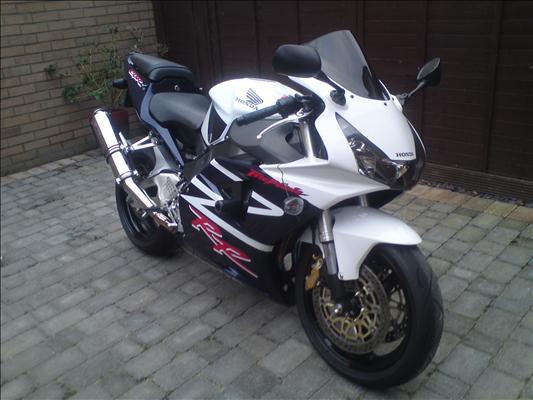 Our pick of the 954cc Blades' on offer at mcnbikesforsale.com is a 2002 model with 14,900 miles on the clock. The bike comes with an aftermarket exhaust, double bubble screen, clear indicators and a tail tidy. All original parts are also included. View the advert here.