In this week's issue of MCN, on sale Wednesday February 22, we have the world first ride of the all-new Honda Crosstourer.

Using the 1200cc V4 engine from the VFR1200, the Crosstourer is the latest bike to join the competitive adventure class, looking to tempt buyers from the adventure king - the BMW R1200GS.

Also in this week's MCN we reveal the new new Triumph Trophy 1200, the Husqvarna Nuda takes on its rivals on UK roads and James Ellison's MotoGP Aprilia revealed!

Plus, we have a free 2012 WSB season guide ahead of the opening round at Phillip Island this weekend! 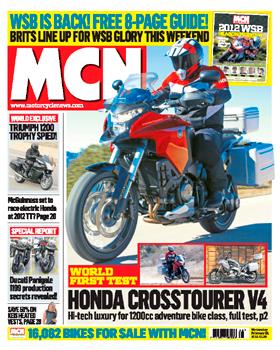 What you'll find in the February 22 issue of Motorcycle News: