In this week's issue of MCN, on sale Wednesday January 25, we test the new Kawasaki ZZR1400 at the bikes launch at the Nardo test track in Italy.

MCN tester Adam Child tested the bike on a 7.8 mile long speed bowl, where he was able to hold it flat out. Child also tested the bike's handling capabilities on a short handling track.

Also in this week's MCN we reveal KTM's new 1200cc Adventure after the bike was pictured during testing in the Canary Islands.

Plus, Brit Tobias Younger on his first ever Dakar, new Victory Judge unveiled, George White collapses and Guy Martin on his future in bike racing. 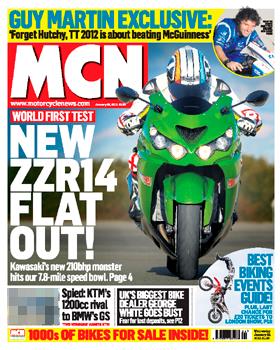 What you'll find in the January 25 issue of Motorcycle News: