In this week's issue of MCN, on sale Wednesday March 28, we have all the news from the final pre-season MotoGP test at Jerez ahead of the first round of the new 1000cc class in Qatar.

Rossi struggled onboard his all-new Ducati GP12 again, Cal Crutchlow continued to impress with another top five finish and James Ellison struggled with chatter issues. Plus more news from the final test, including Moto2 and Moto3. 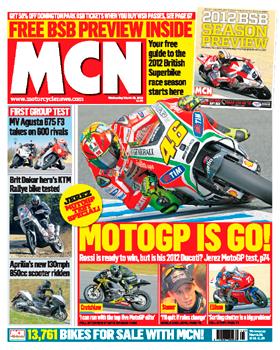 What you'll find in the March 28 issue of Motorcycle News: