After a lifetime working as a precision engineer West Countryman Tony Haines has developed the sort of skills that most of us can only dream about; and if you’re the sort of person who struggles to operate a can opener you’ll be hard pressed to comprehend the two thousand hours of painstaking work he’s put into creating a unique 1/7th scale model of a BSA B44 Victor motocrosser

The replica is in homage to the bike ridden to world championship honours by Jeff Smith in 1964 and ’65, and one raced by Tony himself for many of his twenty years in pre ’65 classic motocross events. Tony takes up the story.

“Back in the 1950’s my dad took part on both trials and scrambles so from an early age I was bitten by the off road competition bug. My first bike was a 350cc Royal Enfield which was a real ‘Jack of all trades’ that took me to work and with a change of tyres it was either a trials or scrambles machine. 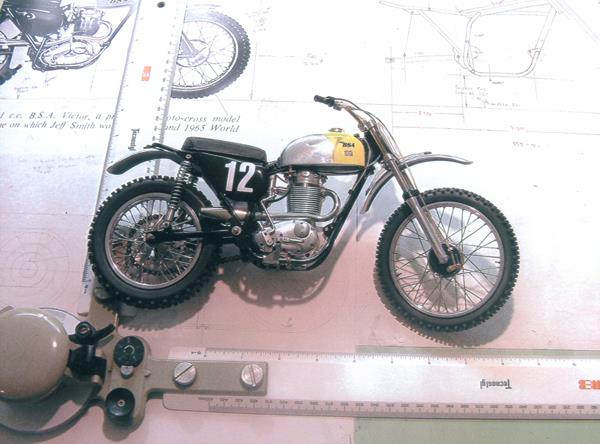 I managed to win my first scramble – a very wet event near Yelverton in Devon – and after getting upgraded to expert status in 1968 rode all sorts of bikes in both motocross and grass track up until 1976. I was then working flat out in my engineering business which meant that the bikes had to go on hold for ten years; however the bug of racing never went away and when pre ’65 scrambling started I got myself a 250cc Greeves Challenger.

This was quickly followed by a 500cc Matchless Metisse, a 441cc BSA Victor and later I built myself a B40 engined bike on which I won three South Western 350cc pre ’65 championships. I had over twenty fantastic years racing in pre ’65 but at the end of the 2008 season decided it was time to hang up my leathers.

“Having sold my business I had time to concentrate on my other love of model making and the idea of the B44 came to me during a visit to the National Motorcycle Museum. In addition to the beautifully restored bikes there were some very good models on display but after a lifetime working as a precision engineer I’ve developed a very critical eye and I commented to my wife, Tina, that several of them were spoilt by poor detail finish; to which she replied ‘If you can do better then you’d better do one of your own’. 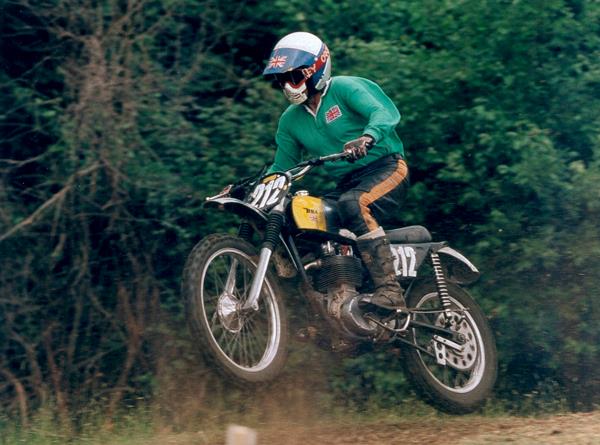 “I decided to take her up on her challenge” says Tony. The choice of which machine to build was an easy one as Jeff Smith was one of my great heroes, and my B44 Victor was an exact copy of the one he’d won his second world title on back in 1965.

I wanted to make it a slightly odd-ball scale which meant it would be as small as possible yet still possible to give all of the detail required in a fully working model and after stripping down and measuring the Victors front forks I decided that 1/7th would be the perfect size.”

Four winters and two thousand working hours later the B44 was finished.
“I constructed the frame first; which is made from high quality steel tube, with silver soldered joints to replicate the brazing on the original B44. This was fairly straightforward but making the engine was very time consuming as I first had to strip my spare Victor motor before I could replicate it in miniature.”

Every component for the engine – which goes together in the same way as the BSA manual - was made out of aluminium on Tony’s model making lathe and milling machine, but making the moulds for the tyres was the greatest challenge. 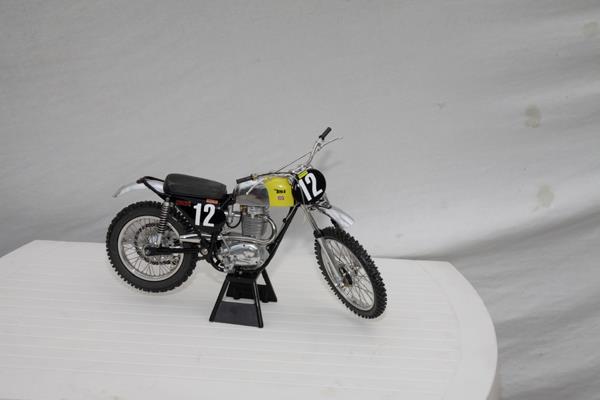 “I wanted to replicate the mould flash you would find on a newly made tyre so the only way to do that was to make it in two halves and then glue them together. This resulted in countless hours of measuring, drilling the holes and then filing them out square to replicate the knobblies on the original tyre; all done with a set of needle files to a tolerance of + or - .005 of an inch. The wheel spokes were laced and the moulded rubber tyres were then shrink fitted onto the rim and held in place with the security bolts.

There was a lot of minute detail work required, and things like the front brake and clutch levers had to be shaped and sculptured by hand. My goal was to make sure that both of the brakes, clutch lever and throttle all operated so there was a lot of head scratching before I came across the perfect thing to use as control cables; some plastic wire with a wire insert used on gift tags.

The only modification needed was to slide out the tight fitting inner wire and replace it with some .008 fuse wire for a perfect control cable. The last point of detail was to replicate the original advertising and sponsorship stickers and despite nearly falling off his chair when he saw the dimensions these were made by ‘The Sticker Man’ in Saltash, who did a superb job.”

The finished model is an incredible achievement, and it sits alongside its full size sibling in Tony’s workshop - a fitting reminder of that golden era when Jeff Smith and his booming BSA dominated the motocross world.