Ever heard of the Flying Brick? It's our BMW K100 used buying guide

"They were very well made and the second hand values are still relatively low. It’s a bike that’s built to last and is arguably more reliable than the Japanese bikes of a similar age. Regularly ridden machines are usually better buys than bikes that have been sitting in a shed".

Any particular models to look out for?

"Under the skin all the models are basically the same. The differences in top speed between the naked, C (cockpit fairing), RT (touring), LT (luxury touring) and RS (sport)  models is down to changes in the final drive ratios, not the engine. The final model K100 RS has a 16 valve engine the others are eight valve".

What should you pay for one?

"Bikes in good condition are currently selling for between £1000 and £3000. People are becoming more interested in building them into cafe racers so the prices are on the rise".

What do you need to check before you find a BMW K100 for sale?

Knocking noises from BMW K100 engine
"Listen for knocking noises when the engine is cold. On early models the output shaft is retained by six rivets that can work loose and the shaft rattles. Later models are improved with twelve rivets on the shaft, this can be retrofitted to older models. Other noises could be the sprag clutch or even the cush drive in the alternator. It is not uncommon for there to be some noises at start-up, especially if the bike has been standing a while".

Worn shaft drive splines
"The shaft drive splines need lubricating regularly or they wear prematurely. The only way to check for wear is to remove the final drive/bevel box and withdraw the driveshaft. This is called a rear spline lube. The clutch spline also needs lubricating but less frequently and this requires the transmission to be removed.
You can check for play in the final drive/bevel box/crown wheel as you would for worn wheel bearings by holding the rear wheel with your hands at the three and nine o’clock positions and try to rock the wheel horizontally, there should be next to no free play".

Worn oil/waterpump seals
"The seals in the oil/water pump can fail causing water to contaminate the engine oil, and vise-versa. Check the coolant tank for emulsified oil. There’s a small tell-tale hole at the front of the sump (under the pump) that will weep water (or oil) before the seals fail. Check this isn’t blocked with road dirt".

Rear main seal
"Look for oil leaks at the rear of the engine behind the gearbox. The rear main seal can fail and oil will leak into the clutch housing. If this has happened the clutch (it’s a dry clutch on the K Series) will probably be slipping. The single plate clutch is normally good for 60-70k miles before replacement is needed. If a bike is near or over that mileage, ask if it’s been replaced recently".

Perished rubber
"And finally, this is a 35 year old bike so check the condition of the rubber parts. The crankcase breather pipe and inlet rubbers are known to perish and fail. A good way of checking the inlet rubbers for leaks is to start the bike and spray WD-40 on them. Any change in idle speed indicates a leak somewhere".

BSK SpeedWorks create performance inspired, handmade, bespoke motorcycles for the road or race track and sell a range of parts for both K Series BMW's and Vincent motorcycles.

Should I replace all the fluids in my long-stood BMW K100RS? 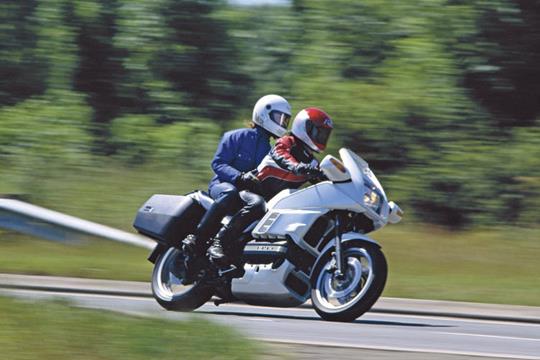 The bike was serviced 150 miles ago with new fluids throughout, plus new tyres, and has lived in a dry garage ever since.

Is it OK just to stick a fresh battery and fuel in (which I have done) and use it or should I change all the fluids (coolant, engine oil and filter, gearbox and differential oils and brake fluid) again before putting it back on the road?

I have started the bike and it sounds sweet. Is there anything else I should look at that I have not mentioned?
Mark Felgate, email

A. The key is not the low mileage, but the length of time it’s lain idle. Even if the oil still looks clean, it will have absorbed some water, as will the brake fluid. The coolant will also have degraded over that time.

As you’ve got such a clean bike don’t spoil it for want of £40 of fluids.