This bike is the freshest breath of air in small capacity motorcycling in years. There, I’ve said it. It could also be exactly what’s needed if today’s youth are ever going to get back into motorcycling in a big way.

For the moment, let’s leave its name, manufacturer and country of origin to one side (rest assured, however, they’re not Chinese). More important are the simple facts that it’s refreshingly, originally stylish (although what any overweight 48-year-old – ie me – knows about youth style is plainly negligible); it’s got that rare performance mix of (reasonable) fun and ease of use, and it’s both cheap to buy and run. And if I could have had all that at 17, with a price tag of £1700, when the alternative was either an expensively out-of-reach Honda CBR (current list: £3499) or a common-as and slightly girly scoot, I’d have happily considered doing what’s apparently the norm among broozing teens these days: drinking someone else’s wee.

So, time for the ‘reveal’ then. This is long established, South Korean manufacturer Kymco’s all-new K-Pipe 125 (there’ll also be a 50cc version shortly) and we’re impressed.

It’s directly aimed at the teen market and being sold as ‘Perfect for a fun ride to work or college’. Which, by our reckoning, is exactly what a youth 125 should do. So, first box ticked.

Where Kymco have been clever, though, is in two respects. First, the K-Pipe’s been designed to stand out visually – and it clearly does just that. This bike isn’t mock or pseudo anything; is no ‘mini sports’ or junior trail instead having an original urban style all its own. For me it’s part-BMX, part commuter. But either way it’s undeniably stylish – and we all know how important that is to 17-year-old males with their primped gelled hair and arse-hanging skinny jeans… 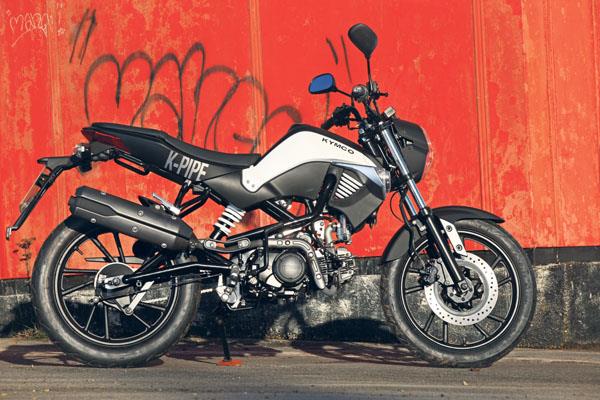 Up close, it impresses even more. Yes, there’s no denying the K-Pipe is a dinky, fairly basic proposition – but on the whole that’s a good thing. Those BMX proportions makes it ridiculously light and manageable. That ‘basicness’ – there’s no excess, no flab – underscores its flyweight feel and ensures it’s cheap.

And yet there’s still plenty of style and quality: the front indicators, clear lenses an’ all, are faired in; the 17-in wheels are smart cast items; there are nicely tactile texture variations in the bodywork plus decent switchgear and instrumentation. Any owner would feel proud, not embarrassed, to own one.

It’s not perfect: the mirrors are little narrow and flappy, the exposed engine and welded, tubular frame a tad crude, the forks seem about as sturdy as drinking straws while on the left is a choke lever and petrol tap that wouldn’t look out of place on an Enfield. But considering the K-Pipe’s price and purpose I can willingly forgive it.

Second, the new Kymco is as easy to ride as a twist and go scoot and yet has enough motorcycle character to entertain. This is due in part to its ‘big wheels’, but mostly to its novel clutch lever-less semi-automatic gearbox which means, in essence, you do just twist the throttle and go but at the same time you also have four speeds which you just stomp up and down through with the heel-toe ‘change. 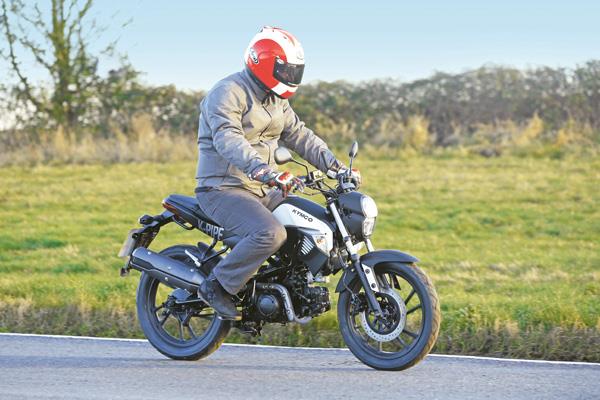 On the move, all of that takes a little getting used to. First, the K-Pipe’s so dinky and light, 6’3” and umpteen stone me felt like I was riding a child’s bicycle – it’s that small.

Even more foreign is the semi-auto gearchange: check the green dash neutral light is on, give it a bit of choke and thumb the starter. Once idling happily prod down into first, twist the throttle and you’re away. Then roll the throttle a touch to stomp down into second, then third and so on.

Within a few hundred yards it becomes pretty intuitive and, as any Honda C90 Cub rider will tell you (it’s basically the same system) a doddle to use and a good introduction to motorcycling. My only doubts concern its reliability considering how roughly you find yourself stomping through the gears but we had no problems on our brief ride.

The peppiness from the 8bhp engine allied the K-Pipe’s manouvrability and proportions makes rudely slicing through town traffic a breeze – as Kymco claim, it’s perfect for that commute to college.

Beyond the 30 and 40mph zones it starts to suffer, however. My commute takes in a couple of miles of ring road dual carriageway and that was more than enough. With a top whack restricted to 65mph you’re quickly gobbled up by traffic and anxiously scanning your mirrors for artics. In town, however, it’s fine. 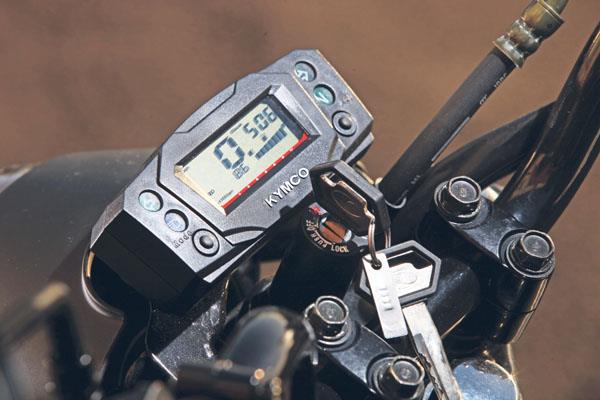 Overall, we reckon the new K-Pipe’s got a lot going for it. OK, it’s not cool with fat 48-year-old on board, but for a skinny 17-er it’s perfect for nipping across town to college. It’s stylish, easy and cheap. What’s more, being a Kymco it comes with the usual two year unlimited mileage parts and labour warranty, which, considering how long you’re likely to keep it, gives complete peace of mind.

Sure, the dwindling hard core enthusiast youth, the sons of bikers, won’t be interested. They’ll still go for CBR or YZF125s. That, pretty much, is a given. Instead it’s the ‘newbies’, the ‘bike curious’ that machines like this will hopefully appeal to and will get into biking. And isn’t that what motorcycling needs?