Ducati is launching its new 848 Streetfighter at a brand new circuit in Italy this morning, and MCN's Trevor Franklin is there.

It's a beautiful day there as it is here, and Trev's looking forward to an intensive morning on the new Autodromo Modena, followed by an afternoon in the real-world roads around Bologna. "It's a beatiful thing, and at £9,995 (+£126 OTR charges) it just about sneaks under the promised £10k threshold. But it's still a big price to live up to. It promises to be better than its big brother for everyday use, but it'll need to be." Trev will shed more light on that throughout the day.

**Update**
9.02am: Trev has been allocated his bike. "It's running a 180/60 tyre – 180/55 is more usual, but Ducati reckons its tyre gives a bigger contact patch at full lean and better ride comfort. Colours are red, yellow, black, and differences to the bigger Streetfighter so far are a new swingarm and 20mm taller bars for a more upright, relaxed riding position".

**Update**
10.40am: MCN’s Chief Road Tester Trevor Franklin has just had his first 20 minute session on Ducati’s new 848 Streetfighter at the Modina Circuit in Italy and here are his first impressions:

"As with the 1098 Streetfighter, you feel sat 'in' the bike rather than 'on' it however  Ducati have fitted 20mm higher one piece handlebars which makes the 848 version so much more manageable.

"You still feel locked into place.  And on this very tight and twisting circuit (it’s very similar to a go kart track) you have to be quite physical with the bars and body positioning.

"The almost stop/start nature of the hairpins demands you have a lot of faith in the chassis and the brakes. At the moment the bike feels as if it’s geared for fast, flowing road use rather than a tight track. The engine is typical Ducati where the torque curve is almost flat, and it deceives you into thinking you’re not going as fast as you are.

"We’re about to go out for our second session where hopefully I’ll be better prepared for what the bike can deliver – and see how good the eight-stage traction control really is.  More soon." 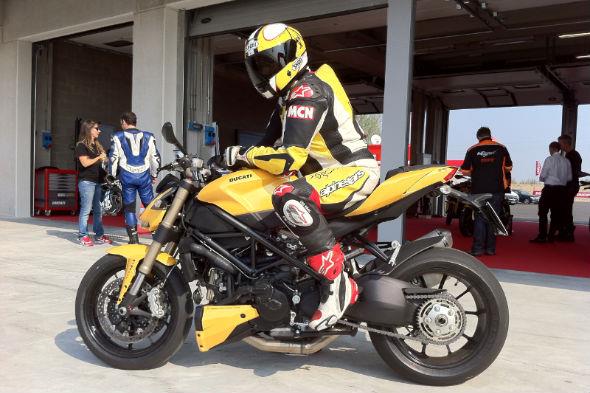 Ducati have added the full details and specification of the 848 Streetfighter to their website here.