The difficult second album from the rebirthed Italian boutique brand, the KB4 uses a 140bhp four-cylinder engine taken from the Kawasaki Ninja 1000SX and follows the firm’s £59,000 Ninja H2-powered Tesi H2, revealed back in 2019.

Kawasaki now own a 49.9% stake in the Bimota brand, which is why both machines feature the firm’s engines, but the relationship runs deeper than simply supplying motors.

Lurking behind the full carbon fibre fairing lies a suite of Kawasaki lean-sensitive electronics, including cornering management systems, cruise control, power modes, ABS, an up and down quickshifter, and traction control. You also get a Kawasaki-derived colour TFT dash with smartphone connectivity, plus the firm’s signature chunky switchgear.

Bimota claim the bodywork mirrors their early Kawasaki-powered machines of the late 1970s and 1980s, but the bulbous design has more than a lick of 1990s YB10 to it.

What’s more, the wide scoops that begin below the single headlight and run along the side of the bike, below the rider’s leather seat, drive air to the radiator, located in the base of the rear subframe.

A design likely to polarise opinions, the bodywork disguises a steel trellis ‘front frame’, which bolts to the head of the engine and uses it as a stressed member.

A billet aluminium swingarm bolts in at the rear of the bike and is suspended by an Öhlins TTX 36 rear shock, complete with remote adjuster. Joining this up front are Öhlins FGRT 43 NIX30 forks – all of which are manually adjustable.

Adding to the premium Swedish springs are brakes from Brembo, with the front radial calipers biting onto dual 320mm discs and the rear underslung unit biting onto a 220mm rotor, just below the bulky end can needed to help the bike pass Euro5.

Those wanting a little more noise will be pleased to know a smaller Arrow alternative is also available, with UK bikes set to be sold with them included in the asking price.

Alongside revealing the KB4, Bimota have announced a naked RC version for 2022. Sharing many parts with the bike above, the RC will ditch the carbon front fairing for a claimed café racer experience.

There’s no official pricing on either model at this stage, however we’re told it’s likely to be between £29,000 and £30,000, with the first KB4s arriving in the UK from February.

Fresh images of the upcoming Kawasaki Ninja 1000SX-powered Bimota KB4 have appeared online, after the Italian firm posted shots of the bike in testing on social media.

Featuring a single round headlight, sweeping '70s lines and an arsenal of the latest tech, sources at the Rimini factory claim a pre-production version could be shown as early as February, with the fully Euro5-compliant production model arriving in March 2021.

The images in question show the compact 1043cc four-cylinder machine undergoing brake tests, with long arms protruding from the sides to help prevent against accidents during the ABS development process. 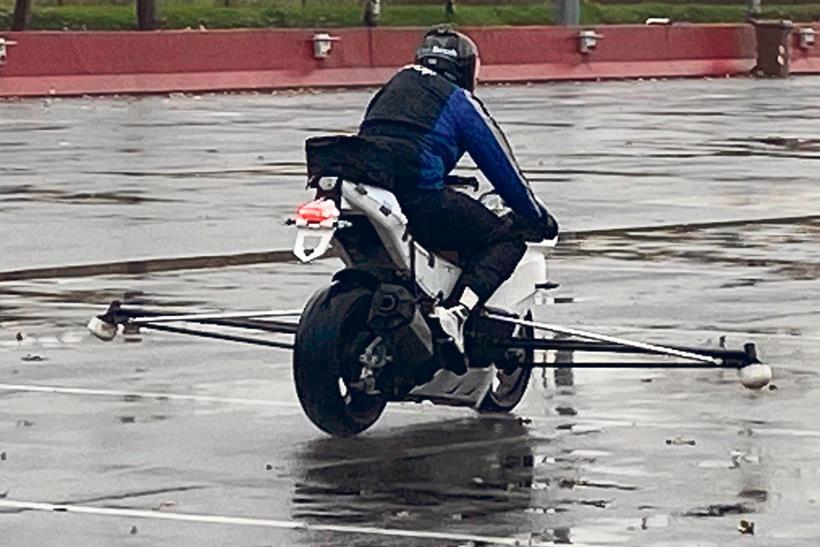 On top of this system, Bimota have also confirmed to MCN that the KB4 will feature the latest Bosch-developed Kawasaki Cornering Management electronics package, which can include wheelie, traction and slide control, plus pitching control under braking and cornering braking management. This is all thanks to a compact Inertial Measurement Unit – again from Kawasaki. Also claimed to feature is engine braking control.

Bimota refuse to be drawn on pricing at this stage, however its closest rival in looks and spec, the MV Agusta Superveloce 800, is currently priced at £17,780. 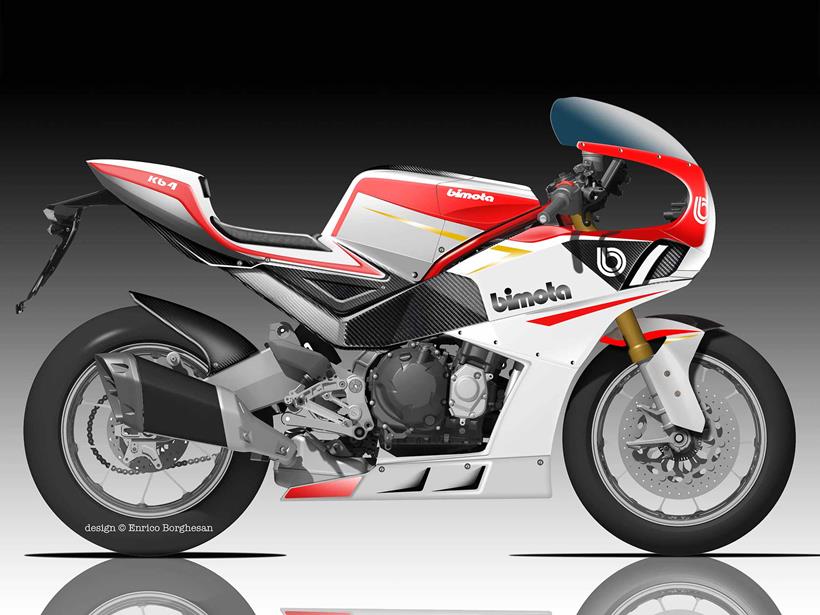 Bimota have confirmed that their long-anticipated KB4 retro sportsbike is set for a limited production run in March 2021, with a planned 20 units allocated to the UK market.

Speaking to MCN, the Rimini firm revealed that the bike will feature a TFT dash alongside ABS, traction control, a quickshifter, ‘cornering management’ electronics and power modes as well as cruise control – effected via the ride-by-wire throttle. There’s also Bluetooth connectivity.

On top of that, the retro looks will be complemented by modern ancillary components, including Brembo braking hardware, OZ forged wheels and a billet rear swingarm.

Suspending the chassis will be manual Öhlins suspension - despite earlier statements from the factory suggesting it might be semi-active. Interestingly, the rear unit is now said to feature an eccentric system – allowing the rider to adjust the bike’s ride height.

As reported by MCN earlier this year, the Euro5 motor will be finished in black and wrapped inside a bespoke trellis chassis  shrouded by a set of '70s-aping fairings reminiscent of the original Bimota KB1 of the period. What’s more, Bimota claim the bike will be the size of a 600; potentially helping to keep it lithe and nimble through the bends.

The KB4’s livery will be finished in a ‘special red and metallised white’ design, while both the fairing and seat unit will be produced in carbon fibre.

Although the full spec and imagery remains unavailable, the sporting ethos, middleweight dimensions and an engine currently producing 140bhp for Kawasaki, make this a direct rival to MV Agusta’s Superveloce 800, which mates retro bodywork, with a trellis frame and 798cc triple producing 146bhp. 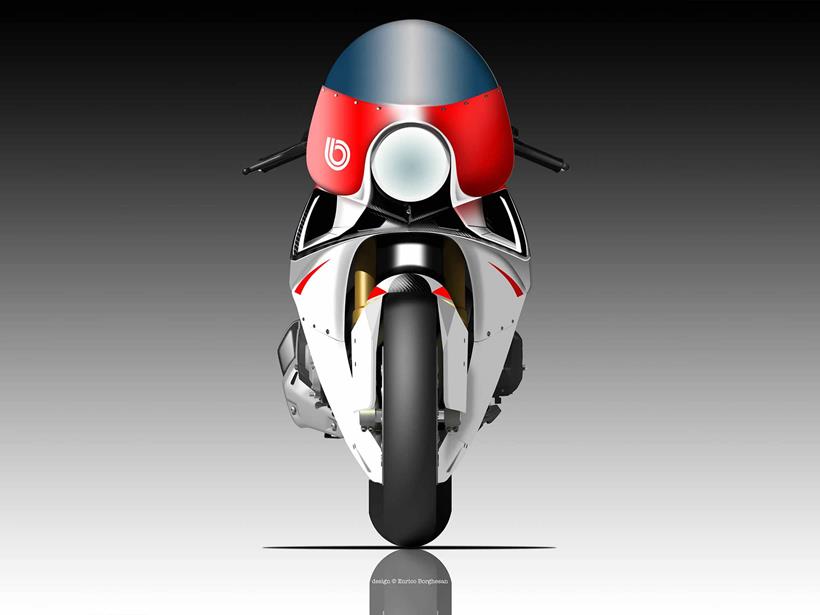 Italian exotica brand Bimota have revealed fresh details to MCN about their upcoming retro-inspired KB4, claiming it could feature electronically adjustable Öhlins suspension if the production process isn’t too heavily affected by Covid-19.

Despite already posting photos of a manually adjustable unit on their Instagram page, Bimota press officer, Gianluca Galasso, told MCN: "If we don’t get too much delay with the suppliers due to the Coronavirus, we will set-up the Öhlins suspension with the electronic control.

"We got affected by the Coronavirus only because of the lockdown, we had to stop for one month as well as all our suppliers," he continued.

First revealed to the public as a rendered image in a 17-second YouTube clip last November (visible below), this is the second model to be revealed by the firm, who were resurrected from the ashes in 2019, after Kawasaki purchased a 49.9% stake in the company.

Alongside the electronic springs, Galasso also went on to say that the '70s-esque sportster would also feature a carbon-fibre rear hugger and that the 1043cc, four-cylinder engine would be finished in black.

This engine will come directly from Kawasaki’s Ninja 1000SX and will be wrapped in a striking Bimota trellis chassis. Producing 140bhp, it’s also likely the new machine will come with Kawasaki’s latest ride-by-wire throttle, which allows the SX to have cruise control.

"The engine will be the same as homologated by Kawasaki, this is a very big advantage for us," he continued. "It will, of course, be Euro5."

Alongside the photos of the Öhlins springs, Bimota also revealed a pair of blurred images, showing the front and rear of a pre-production mule (seen below). Although it’s hard to make out many details, the bike does still appear to be a single-seater like the early drawings suggested and feature a TFT dash – potentially the same unit as that of the Ninja 1000. 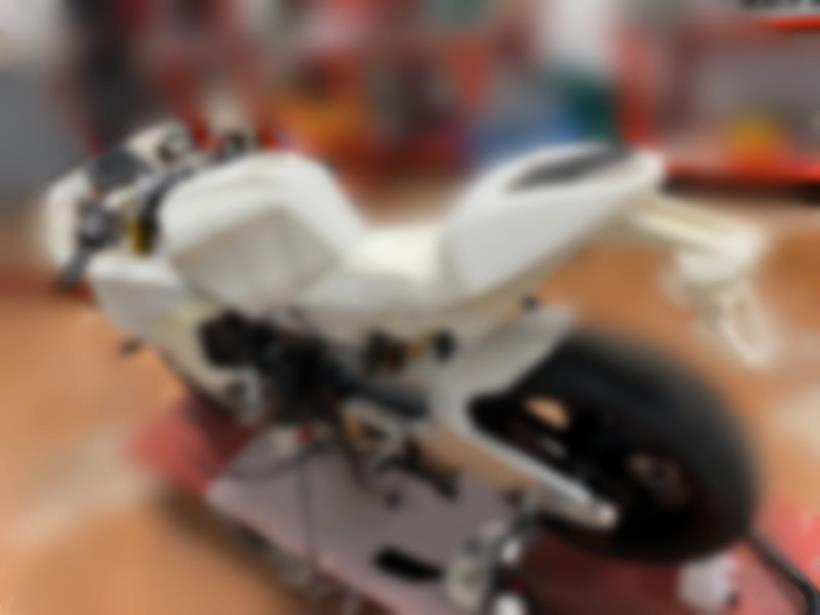 Alongside discussing the KB4, Galasso also shed some light on when we might see a finished version of their headline-grabbing supercharged Bimota Tesi H2, which comes with hub-centre steering and the 227bhp powerplant from Kawasaki’s Ninja H2 hyperbike.

Revealed at the Eicma show in 2019, they had planned to launch the bike in July 2020. Due to Coronavirus, this has now said to have been pushed back to September – providing the supply of parts doesn’t change. At present, the KB4 is set to follow between two and three months later, however this remains in discussion.

Pricing of the KB4 is also still not confirmed, however Bimota’s man went on to say: "Retail price is still too far to be decided. I can only tell you that we will keep the KB4 price levelled to the competition."

As always, MCN will bring you more information on both bikes as it becomes available. Keep an eye out for the full reviews...

A spokesperson for Italian firm, Bimota, has today confirmed to MCN that the first pre-production version of their retro-inspired KB4 sportsbike could appear as early as summer 2020.

The second new model to arrive since Kawasaki purchased a 49.9% stake in the company late last year, the bike will feature the latest 1043cc four-cylinder engine, found in the 2020 Kawasaki Ninja 1000SX, wrapped within a new Bimota trellis chassis.

Unlike the fully-built Tesi H2 we saw unveiled at Eicma in November 2019, the KB4 has only been seen as a render and a short YouTube video so far.

"The first test prototype is scheduled to be on the road during the spring 2020, so it’s reasonable at the moment to plan a pre-production bike for the summer 2020," Bimota press officer, Gianluca Galasso, said.

Bimota say the bike will also adopt the Kawasaki’s electronics package, to help the chassis manage the bike’s 140bhp engine. This appears to include Kawasaki’s latest ride-by-wire throttle, which allows the SX to have cruise control and is given away in the imagery by the bulky housing behind the right twist-grip.

"The idea shared by Bimota technicians is to have a 600cc size motorcycle with the power of a torquey 1000cc engine," Galasso added.

"This started at the beginning of the company, during the 70s and 80s, when Bimota’s primary idea for a bike was one the size of a 500cc with the performance of a 1000cc machine."

The new bike also bears more than a passing resemblance to Bimota’s early KB1, which first appeared in the late 1970s. As well as featuring a similar curved front fairing and single rounded headlight, the KB1 was also powered by a four-cylinder engine taken from Kawasaki’s original Z1000. The same basic 1043cc engine found in the new KB4 has also featured in Kawasaki's modern Z1000, too. 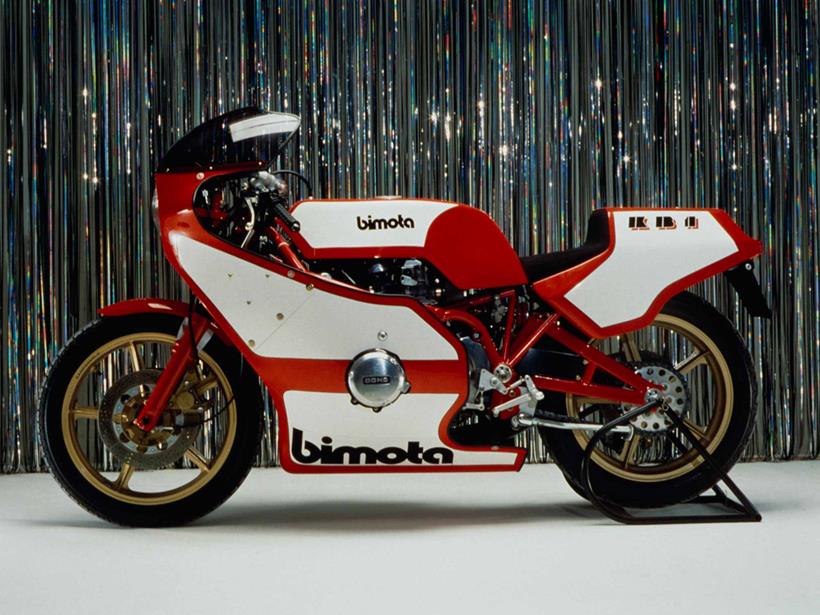 The first new Bimota since the BMW S1000RR-powered BB3 in 2014, it features the same supercharged 998cc engine found in the Kawasaki Ninja H2 and is suspended by the firm’s unique front swingarm technology.