American Nicky Hayden has given his thoughts on a range of subjects as part of a teleconference for the iconic Indianapolis circuit.

The 2006 world champion gave his thoughts on his brilliant fourth place in the season’s opening round of the season in Qatar, as well as having an unplanned weekend off after the postponement of the Japanese GP.

What has been the biggest reason for your improvement on the bike this year compared to last year?

“Well, I would say it kind of started toward the end of last year, the middle of last year. We started to get some momentum going.

"I was faster than it really looked. We had some bad luck, some incidents, you know, where we didn’t finish some races that hurt us every time we tried to get momentum going. 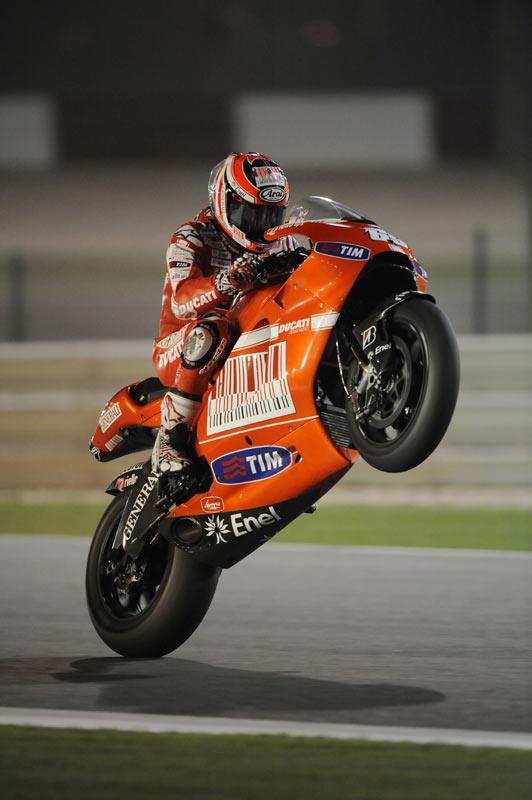 "But, for sure, this winter the bike is a little bit different, and I just feel a lot more comfortable on it and also with the team. It’s the second year with the team after a long time on Honda’s. It was a big change last year.

"I certainly didn’t adapt the way I wanted to. But this year things seem to be going a lot better. The communication with the team is a lot better than it was last year.

"I feel comfortable. I like the bike. We’ve been quick testing, but we still got some areas we need to improve on. So we’ve got a lot of work to do.

You’ve got a week off. What are you going to do?

“Yeah, it was strange, you know. I’ve missed races rain, sleet or snow. About the only thing I can compare it to was Willow back in the AMA days when the 911 caused that race to get canceled.

"It was quite strange. But basically, you prepare for the trip and the race, and pretty much everything calculated out, and then you wake up Sunday morning and find out no race.

You’re far more comfortable on the bike this year than you were last year. Can you possibly give us an idea of what it’s about?

“I would say the engine certainly is smoother. And on the bottom, it just gives you a bit better feel when you open the power and try to accelerate out of the corner.

"This engine, you got more connectability. You feel it better. But back to what I said a minute ago, I think a lot of it is just a second year on the bike and with the team.

"But the main thing for me, I need to go and be fast on a weekend that we show up on Friday and we don’t have, like Qatar, two days of testing.

"And also like Malaysia, when I was quick. We had already been there once in testing, and it wasn’t until the fourth day that I went quick.

"And that was one of my targets for this off-season was improving that. Really, I guess we’ll find out at Jerez if that’s the case.

In Qatar, it looked like you were quite comfortable on the bike, and then we saw the unfamiliar spectacle of a Ducati being passed almost at will on the front straight by the Honda.

Do you believe that this may be partly due to the revised firing order that improved delivery, and if so, do you think Ducati can respond to that with more power while still surviving under the new engine restrictions, or regulations, with the limited number of engines?

“Well, the big thing is that we didn’t gain anything on top. It’s just a fact when you do that, you get more torque and more in the bottom.

"You have to lose a little somewhere. But the Honda is quick. All winter, everybody: “Ah, the Honda, what’s wrong, what’s wrong?” But it was certainly quick in a straight line.

"Compared to the Yamaha, I had more legs than him, but Dovi was strong. As far as development goes, the engines are pretty well sealed. 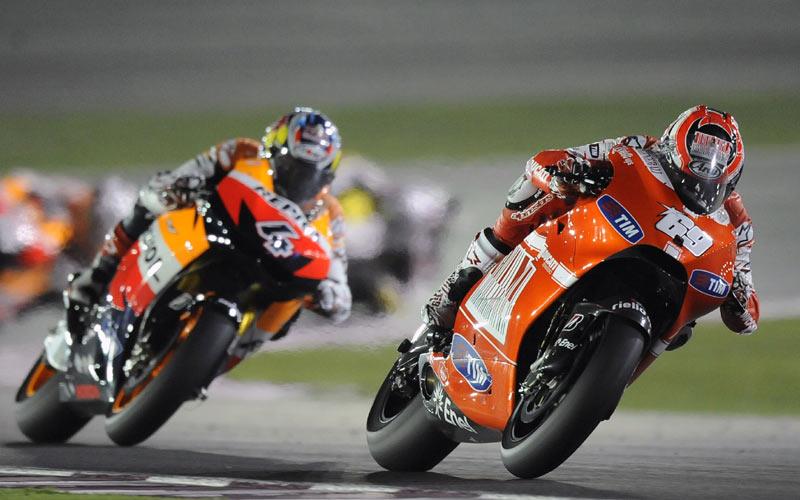 "Now it’s not like we’re going to be able to change a lot with the engines. But we’re always working on things with electronics, aerodynamics.

"There’s ways to try to get down the straightaway quicker. But to be fair, the last corner in Qatar, I wasn’t getting off the corner great.

"And I knew all weekend I kind of struggled there with the balance of the electronics, with the traction control, and wasn’t getting the power down. And I knew it was a problem. We’d seen it on the video, seen it on the data.

"But I didn’t realize it was such a problem until in the race. If I could go back and do something different, I certainly would change my transmission to try to get off that corner a lot better because that really killed me.

"If I could have did some stuff better there, I certainly would have been able to put up a better fight. But we try to learn from it.”

Do you feel like it’s also partly down to different tracks and that the characteristics of your motor might be better suited to something more technical?

"So I think we hold off on making any conclusions and get to some different tracks with different climate and see if it’s the case.

"But I know Ducati can see the problem. Even last year, I didn’t have great top speed. But I was normally too far back for anybody to see it.

"It was just me telling them. Now I think they see. And they have worked a lot with me this winter to try to improve my aerodynamics and with the bike, and to get some better top speed.

"And it has helped. But we still got some more work to go. But our engine, I think, should be very suited to a lot of tracks. I’m happy with the engine.”

How big of a deal it is to be top American that races in the championship?

“Ah, you know, a bit. But not really. But there’s a lot more going on than worrying about being the top American. Fortunately, this year top American, you’re not doing too bad. Everybody is going fast.

"But yeah, any rider who don’t admit to it is lying. Sure, on race day, you want to be top American, top Ducati, top everything. So, sure, I’m not wanting to get worked by any Americans or get worked by anybody else, for that matter.

The whole situation with the Japanese Grand Prix being canceled due to the unpronounceable volcano, have you thought about coming over to stay in Europe for the period the circus is in Europe?

“Yeah. Once the season really gets rolling and we start having back-to-backs, sure, I’ll be staying in Europe like pretty much every other year. But after Qatar, it was just as easy to come back home.

"But yeah, once we get going and once Ducati starts and Marlboro sending me on PR trips and have to do some real work, then, sure, I won’t be coming home. But I’m not going to plan my life around a volcano, and that sort of thing.

Do you have any idea when you’ll be expecting engine upgrades? Will it mostly be just software and chassis bits that you’ll be getting?

“We haven’t talked about it. I know the test team is constantly working and going. But once the season starts, it’s not like a lot of stuff changes. Them bikes, they’ve got the parts made. Everything is there. 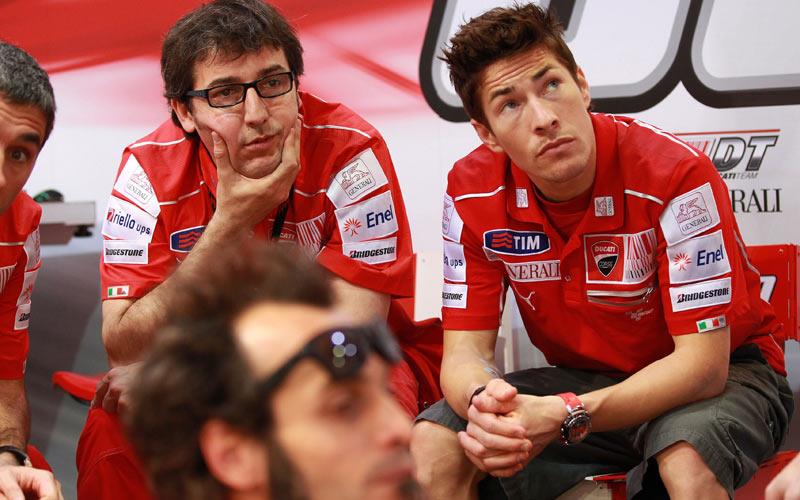 "It’s not like they can just start hacking out new parts here, especially for the engines. They can’t just fire in a new engine.

"It takes a long time to test reliability, to test it on dyno. A lot of their test work is already thinking about next year. But sure, they’re not sleeping over there.

“I haven’t gotten caught up in all of that because until the rules come out black and white, I really haven’t paid a lot of attention because right now I’m riding an 800 Ducati, and I don’t make the rules.

"So unless they’re going to call and let me weigh in and write up the rules, no need to waste a lot of time or energy on something I can’t control. I don’t know, man: Everybody riding two different bikes, man, that all sounds a little bit crazy.

"The FIM, I think do a good job, other than the switch to 800s. For the most part, they’ve got some sharp people in there and will make something to go racing.

"It’s unfortunate now that the economy and the manufacturers are hurting, and they can’t just fire in a new rule and teams can spend all the money to develop parts. Really, I haven’t followed it that close. The idea of going back to 1000s, I love that.

"Because the bore and stroke, the difference between the 800, 1000, really, I’m a rider, not an engineer. I really don’t understand some of it, so I don’t even know.