Reigning Moto3 world champion Maverick Vinales has taken his first victory in the Moto2 class on only his second race in the class, controlling a crash-strewn damp race from the front to take victory by four seconds from Tito Rabat.

Dominique Aegerter was the early race leader, leading from the line safely until Vinales was able to pass with ease and pull away from him; Aegerter was also unable to hold off the advances of Tito Rabat as well, who passed him to take third at the line.

Rabat had a tough battle earlier in the race, though, leaving himself with a lot of work to do as he chased the leading pack, especially teammate Mika Kallio, who took fourth after a late battle with Xavier Simeon ended with the Belgian crashing out.

He wasn’t the only one, though, with Sam Lowes, Luis Salom, Josh Herrin (twice), Jonas Folger, Johann Zarco, Franco Morbidelli, Nico Terol, Alex Pons, Julian Simon, and Lorenzo Baldssarri all meeting the gravel unexpectedly. Simon is looking at possible penalty points after taking out one of the pre-race favourites Zarco.

Lowes was unfortunate to get caught up in a first corner pile-up, but was able to re-mount and only just missed out on the points in 16th; the World Supersport champion was lapping at top ten pace for most of the race.

Gino Rea was able to make a blinding start to move from 34th and last to the top fifteen in turn one, but lost pace later in the race and dropped back to finish 25th.

Speaking afterwards, Vinales said: "For sure I dream that if we work we would be able to get this. I try to make old tyres work, make lots of laps, and we have incredible pace at the end. I need to thank the team, they did incredible work and I was really comfortable with the bike right until the end." 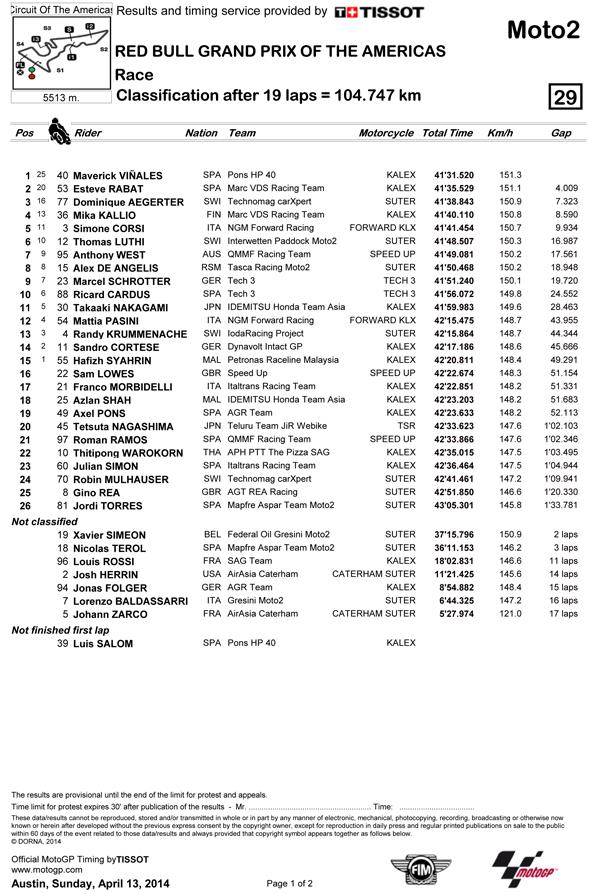